About the Energy Outlook

Get the details on pricing trends, weather, storage levels, tariffs and more.

The Energy Outlook is designed to inform you about the current state of the natural gas and electric energy markets. While prices are most important, we offer insights into the drivers of the energy markets and shed some light on how these drivers impact market prices. The primary energy market drivers fall into two areas: Fundamentals and Politics.

Storage Well Below the 5-year Average

An unfortunate event on the Freeport LNG facility located in Quintana, Texas in early June 2022 has created a natural gas price reprieve in the US and an even higher price inflation in Europe. The explosion at the Freeport LNG facility has diverted 2.1 Bcf/d natural gas supply to storage or for use in the daily market. News of the LNG export service not returning at the facility until late 2022 have driven NYMEX prices off by $2 per MMBtu for the prompt month and over $1.1 per MMBtu for the forward 12-month strip.

The extra 2.1 Bcf/d staying in the US supply chain is welcomed news, but gas inventories are still 13% below the 5-year average. Natural gas production for 2022 is only 3% higher than 2021, and natural gas consumption by electric generation plants is on pace to set a record high in 2022.

Weather news from NOAA are not the greatest, calling for unusually high temperatures in most of the country for July through September. The upcoming hurricane season is also predicted as very active. The war in Ukraine continues strong confined in the Eastern part of the country but the disruption of natural gas supply to Europe remains very strong. Germany is even considering refiring coal generation plants to deal with the shortfall.

Storage Well Below the 5-year Average

The Energy Information Administration (EIA) “Natural Gas Storage Report” shows working gas in storage was 2,095 Bcf as of Friday, June 10, 2022. This represents a net increase of 92 Bcf from the previous week. Stocks were 330 Bcf lower than last year same period and 323 Bcf below the five-year average of 2,418 Bcf. At 2,095 Bcf, total working gas is within the five-year historical range. 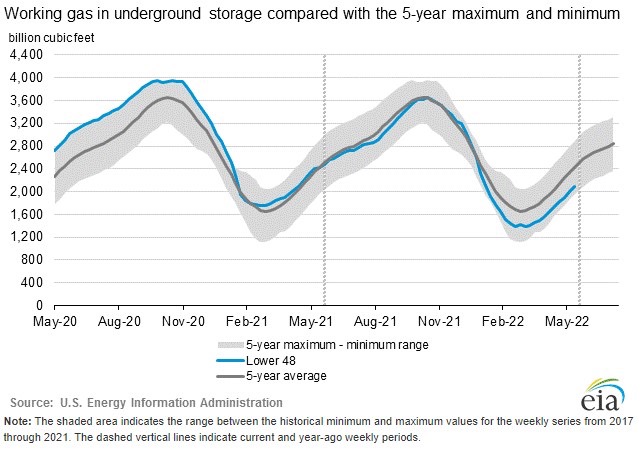 Every year the traditional storage injection season starts on April 1st and continues through October 31st. This injection season has started with very low increases to storage volumes during April. This year’s withdrawal season ended well below the 5-year average. The colder than normal temperatures during April did not help the situation. The Ukrainian/Russian conflict continues strong with no end visible anytime soon, the global economy is in full motion posting high inflation numbers, most markets are wide open and global demand for natural gas has increased year over year. Demand for natural gas will continue to be strong and production continues to play catch up, price volatility with spikes during high demand periods is here to stay. The explosion earlier in June at the Freeport LNG export terminal caused a major disruption in LNG exports and returned over 2.1 Bcf/day to the US market. This facility accounted for over 17% of all US LNG exports annually and will not be back in operation at least through the end of the year. This surprise additional capacity has eased natural gas pricing in the US but has caused additional pain for the European markets.

US natural gas production in 2021 averaged at 93.5 billion cubic feet per day (Bcf/d), the prior daily record was set in November 2019 at 95.4 Bcf/d. The EIA is forecasting that production for 2022 will average at 96.5 Bcf/d, mostly driven by higher prices. Producers will continue to maintain current production as well as meeting additional demand pressure, but they will remain sensitive to forward market pricing. 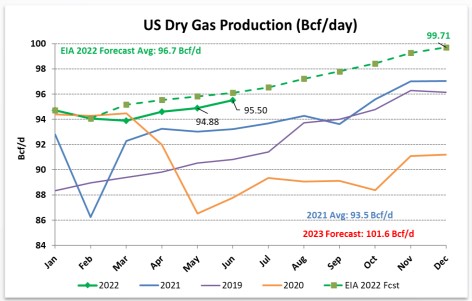 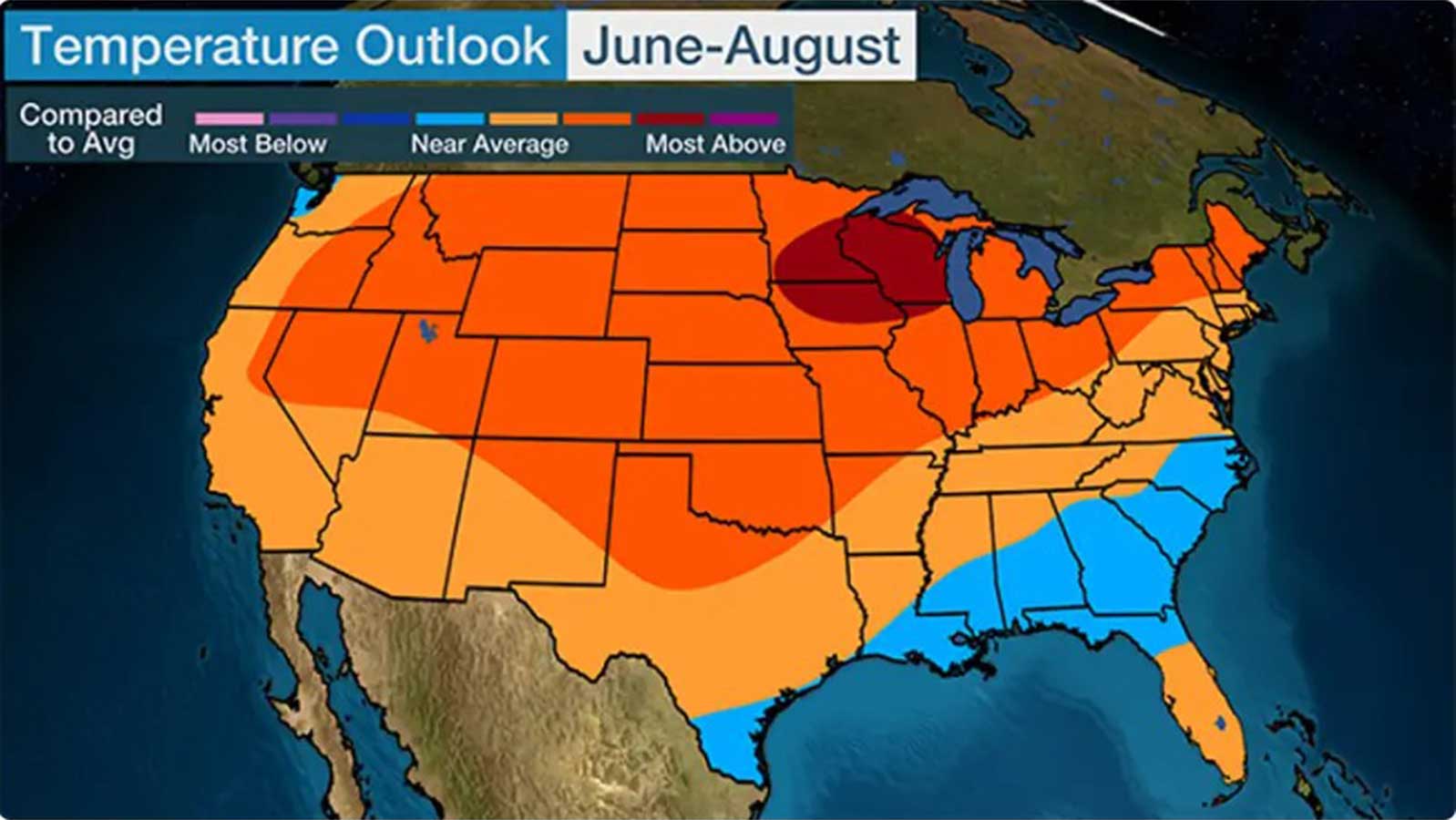 Summer 2022 is expected to be hotter than average across a large swath of the US, according to an updated outlook from The Weather Company.

An expansive area from the Great Basin and Rockies to the Plains, Midwest and interior Northeast is forecast to see temperatures that are the most above average from June through August. The most persistently hot conditions, relative to average, might set up in parts of the upper Midwest. Meanwhile, summer heat may be a bit more muted, relative to average, across parts of the Southeast and the Gulf Coast. Overall, the setup this summer looks like last summer.

Current forecasts are trending toward a rare “triple dip”, in other words a third consecutive La Niña this coming fall and winter. Five of the past six summers preceding La Niña winters have been overall hotter in the US. The current drought from the Plains to the West may further influence summer temperatures. Drier soil heats up a lot faster and can boost areas of high pressure aloft, often associated with extensive heatwaves.

Summer weather has come in strong even before the first day of summer on June 21st. The forecast is pointing towards the likelihood of a top 5 hottest June since 1950. This record is driven by Texas and the South, which are likely to have their hottest June on record. The only portion of the country with cooler temperatures in June will be the Pacific Northwest.

The northern Rockies, Northern Plains and upper Midwest are most likely to swelter in a hotter than average July in 2022. Areas from the central Rockies to Oklahoma to the Great Lakes are also expected to have a hot month. The Southeast and much of the Gulf Coast may have a somewhat cooler than usual July. With the focus of the heat farther north, this could leave the Southeast in a pattern of humid, but less hot easterly winds. The best chance of a cooler July, however, may be in the Southwest, where an early start to the wet phase of the monsoon - summer thunderstorm season - is expected, as happened last summer.

The core of August's heatwave is expected from the Great Lakes to northern New England. However, a generally hot August is forecasted from the Missouri Valley to the Ohio Valley and mid-Atlantic. For the same reasoning discussed in the July paragraph above, August heat is expected to be muted, overall, from the Desert Southwest to the Carolinas and Florida.

The Atlantic hurricane season has a higher probability for above average activity. 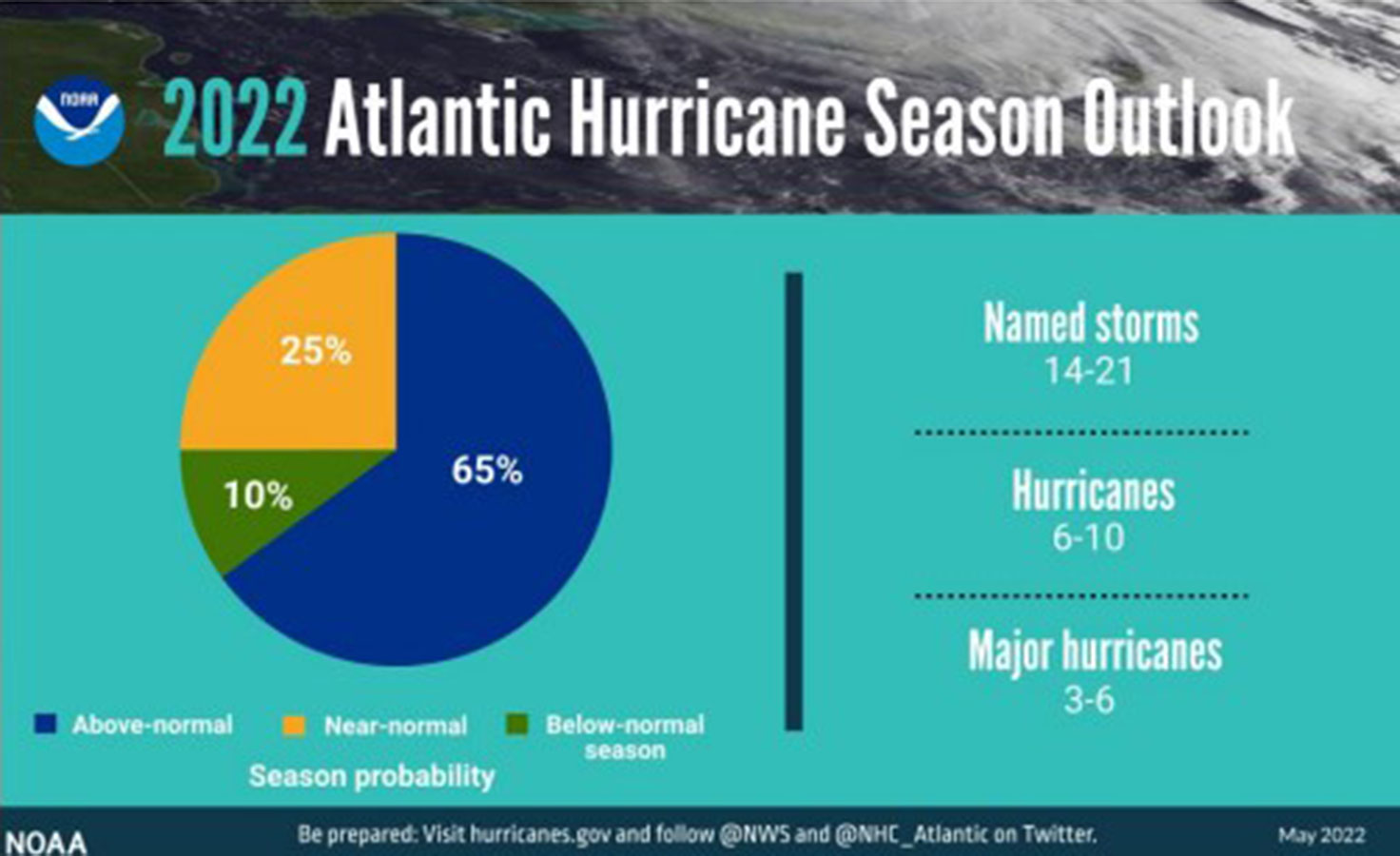 The Energy Outlook mainly focuses on natural gas prices because they tend to lead electricity prices. As natural gas prices increase or decrease, electricity prices often follow suit – but hours, days or weeks later. Also, natural gas has a national price established on the NYMEX. Other regional prices and markets exist but are compared with the NYMEX prices. Electricity is different because the U.S. is divided into 6 regional markets, each setting its own price and having its unique market rules. All six regions tend to move in the same direction, but price volatility and generation vary considerably between regions.

The U.S. economy experienced its largest contraction in 74 years by dropping 3.5% in 2020. The economy moved from 30% capacity in 2020 to approximately 100% by the end of 2021. The results of this increase have been higher prices and product shortages. Originally inflation was advertised as temporary but recent price spikes, including energy have assured that inflationary pressure will remain in place for the foreseeable future. Higher prices for essential goods result in less disposable income, harming discretionary spending which drives 70% of the US economy. As the Federal Reserve has moved to raise interest rates, the highest rate hike in the past 20 plus years, we worry about slowing down the economy and stalling the equity market growth, eventually leading into a recession. Based on the latest Wall Street Journal economist survey, the probability of a recession over the next 12 months has been raised to 44%. Concerns of high inflation and a looming slow down of economic growth has resulted in high volatility and an uncertain economic outlook.

Natural Gas 12-month strip prices experienced a substantial increase over the last six months. Higher natural gas fired electric generation has kept demand up. Industrial use continues to show strength. LNG exports have recently had a surprising dip due to the Freeport LNG terminal emergency. Exports to Mexico have remained elevated. Production has steadily increased since last year at a slower than forecasted rate. The market is still hoping for 100 BCF/d by year end. Natural gas rigs have recently increased to 154 compared to the low of 68 back in July of 2020. 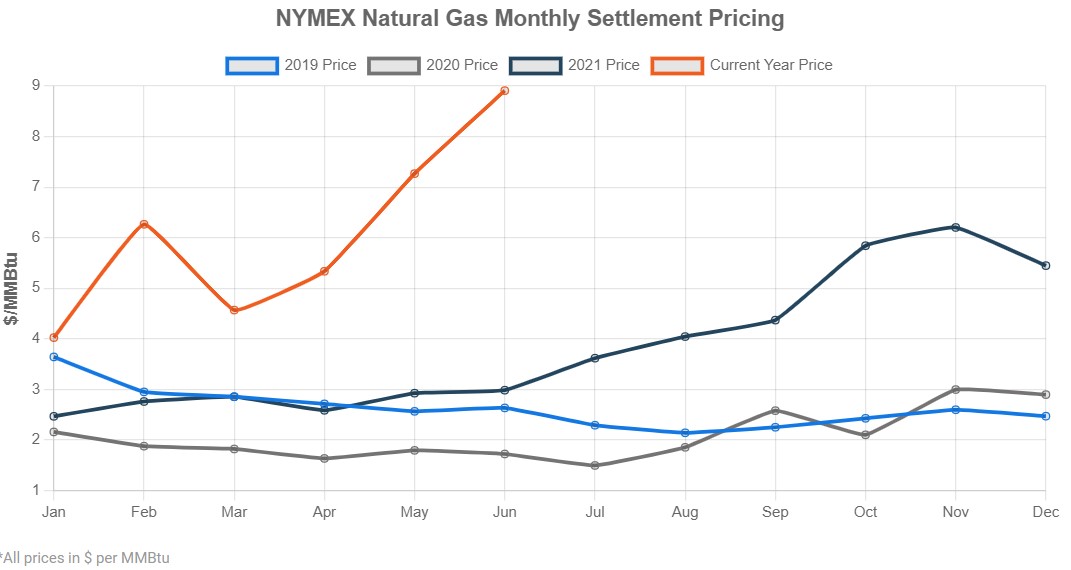 Crude oil in early June OPEC+ agreed to a production increase of 648K bbl/day, a 50% increase from prior production but only for the months of July and August. The market took this increase in stride because US gasoline demand is still high, Russian output is expected to continue its decline and Chinese demand is increasing steadily after the COVID shutdowns. Price of Crude (WTI) reached $122 per barrel on 6/8/22, the highest prices since March 2022. The price recently dropped below the $105 mark. US oil rigs are currently at 584 (6/17/22) compared to the low of 172 back in August of 2020. 2021 capital investments in the US oil production were at the lowest levels since 2004. Despite 2022’s projections of 15-20% boost in capital investments, oil production and its associated natural gas production will not see significant gains due to higher drilling costs and labor shortages.

Electricity markets are complex, with many regional markets. The regional markets may differ from the overall continental energy outlook. The increase in natural gas pricing and the related pipeline constraints are major factors for the foreseeable future. Forward power prices for 2023 are mixed, regions with higher concentration of natural gas as generation fuel are experiencing a 7% drop, while areas with higher coal concertation are flat. 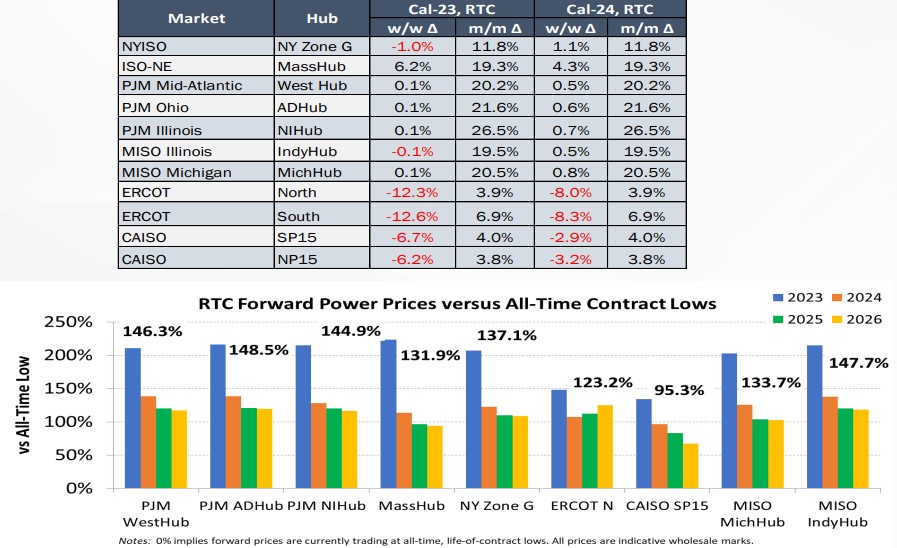 Russia / Ukraine Conflict: The Russian government’s recent move to redraw the map of Ukraine with its recent invasion will further impact the already turbulent energy markets. Natural gas prices in Europe spiked, Germany decided to halt certification for the Nord Stream 2 pipeline, US and European sanctions could prompt Russia to decrease oil and gas exports, Europe’s dependance on Russian natural gas supply could lessen. All this activity will certainly have an impact on Energy prices with added costs to the American consumer. Alternate natural gas sources for Europe are possible but the current global production and supply restraints are also very real. The following map sourced by the European Union shows the importance of Ukraine as a pipeline hub between Russia and Europe. 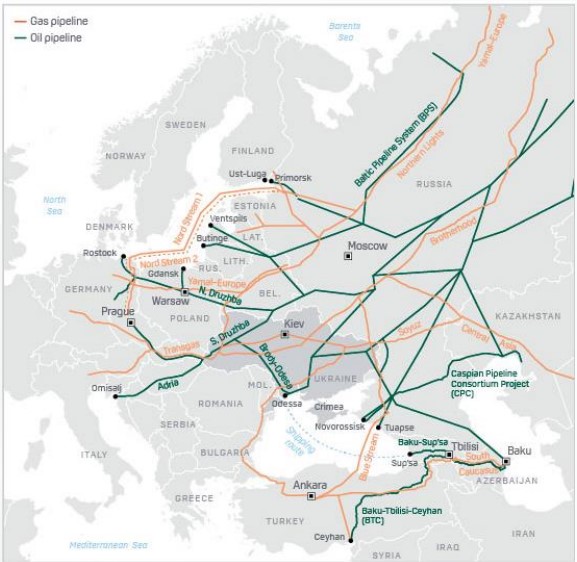 The natural gas flow from Russia to Europe has increased over the last decade. While domestic production has decreased substantially. LNG is an option, but it is very expensive to produce and transport. Germany has become very dependent on Russian natural gas due to nuclear plant shutdowns and they are now considering re-firing older coal plants.

The unfortunate events at the Texas Freeport LNG terminal have presented us with a Buy opportunity on the near-term market weakness! Storage levels at the end of the current injection season (October 31st) will determine if price volatility remains strong. If we see the storage deficit grow and summer weather comes in as strong as forecasted, keep your seatbelts tighten, the bumpy ride is not over.

There are still several factors driving volatility such as the low storage condition, slow natural gas production expansion, summer season temperatures and how the conflict in Ukraine resolves. A hot summer will drive prices further up. LNG exports will resume by year end and possibly continue to increase with very attractive prices to the producers. European natural gas shortages into next winter could cause havoc in the market.

The next few weeks could be our most realistic opportunity to secure favorable future pricing. Work with your trusted broker on long-term pricing strategies to avoid market volatility and ensure budget certainty.

WHAT HAPPENS TO OUR BUDGET?

WHAT IS OUR RISK MANAGEMENT?

What is our risk management policy to protect the business against energy price volatility?

WHAT IS OUR RISK TOLERANCE?

Do we want budget certainty with fixed prices or do we want current market prices and the associated risk of cost fluctuations? 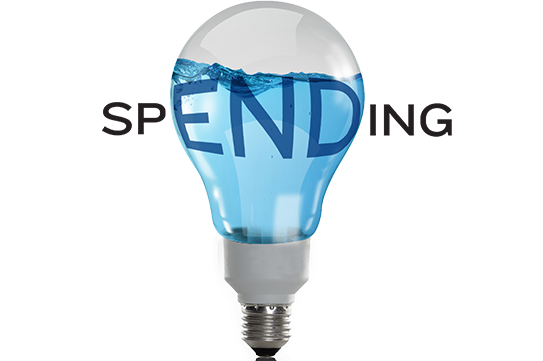