So Far, So Good (Mostly) on May Apartment Rent Payments 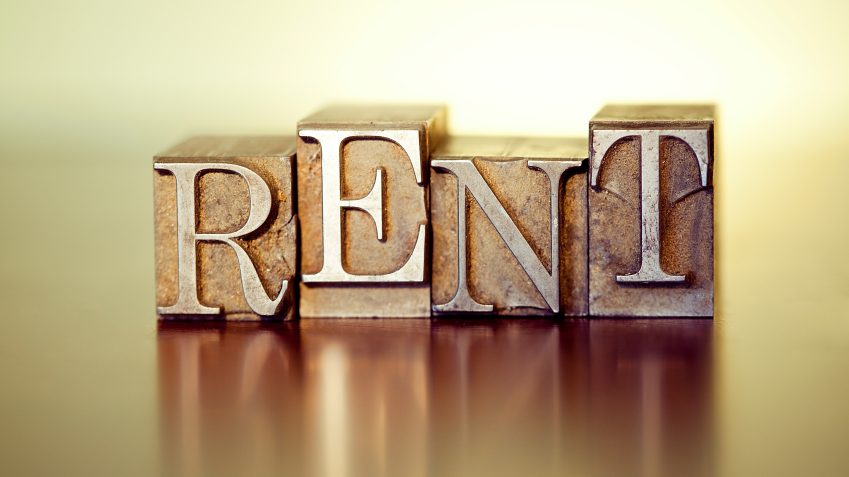 Monthly apartment rent collections have gotten off to a solid start during the initial week of May.

As of May 6, payment has been received from 80.2% of the nation’s apartment renters. That figure trails the result for the first six days of May 2019, but the shortfall is just 1.5 percentage points despite the big job losses suffered in recent weeks. May’s monthly payments actually top those received during the April 1-6 time frame by 2.2 percentage points.

“Despite the fact that over 20 million people lost their jobs in April, for the second month in a row, we are seeing evidence that apartment renters who can pay rent are stepping up and doing so,” NMHC President Doug Bibby said. “We expect May to largely mirror April, when the payment rate increased throughout the month as financial assistance worked its way to people’s bank accounts.”

Unemployment benefits are helping those who have lost their jobs to continue to meet their rent obligations. Also, property managers are working hard to get collections completed. They have been very proactive in establishing a dialog with apartment residents, making sure that any renters who can’t pay in full for the moment are aware that payment plans are an option.

The initial results for May are encouraging, but it’s yet to be seen whether the payments still missing can be collected at the normal pace.

RealPage statistics show that 84.6% of households living in luxury Class A properties have paid their rent for May, while that figure is 83.1% in middle-tier Class B projects. However, those living in lower-level Class C communities are struggling a bit more, with 73.6% of the monthly rent payments received so far in that product niche.

Workers in the hospitality and retail industries have been hit especially hard by the economy’s pullback, and many who had been employed in those sectors live in Class C apartments. Furthermore, those on the lower end of the income spectrum rarely have any financial reserves that would help them cope with income interruptions.

Las Vegas, Los Angeles and New York are metros where rent payment levels fell below typical in April, and they again were areas with lagging collections as of early May. While the share of total rent payments achieved in the May 1-6 time span varies from one metro to another, those shares are down about 9 percentage points from year-ago results in each case. 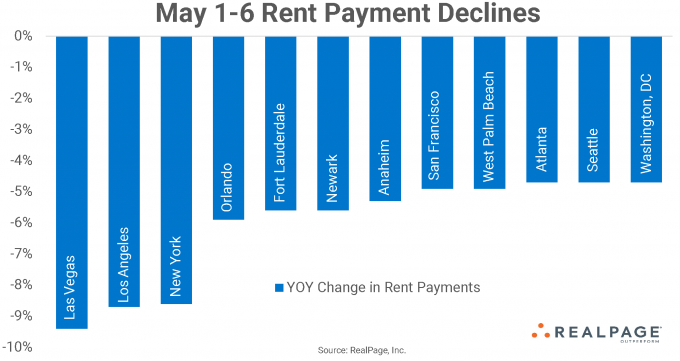 One of the surprises from April payment results was that rent collections held up quite well in the tourism-heavy Florida markets. As of early May, however, there is some deterioration in performance, especially in Orlando and Fort Lauderdale. Anaheim is another hospitality-heavy economy where collections appear to be impacted.

A handful of the locations where rent collections appear to be trending down from year-ago levels are more surprising, as they weren’t trouble spots as of April and they don’t have economies focused on industries that would seem to make them vulnerable to missed rent payments. Keep an eye on what happens with rent collections through the remainder of May across San Francisco, Atlanta, Seattle and Washington, DC – specifically the Maryland suburbs for metro DC.

On the other hand, notice the markets you don’t see on the list of areas where there could be concerns. The Texas markets – even energy-influenced Houston – are in solid shape for payment levels so far, as are previously fast-growing economies in the Carolinas and Tennessee. Most Midwest markets likewise are avoiding pronounced struggles at this point.

For a deeper discussion on the latest trends in rent payments plus insights in resident retention, leasing velocity and pricing achievement, join us Tuesday at 10 a.m. CST for a live webcast.