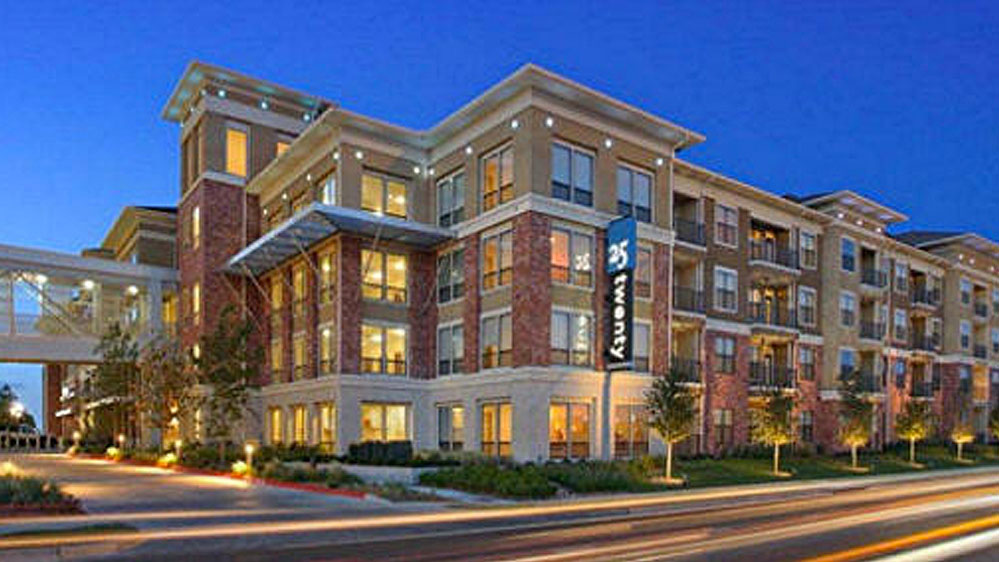 The delivery of the 46,000 beds expected this fall has begun, though some projects’ completion will surely be delayed, some even into next year. Axiometrics has already identified 41,700 beds to be delivered for fall 2018, though almost 12,000 of them have not started construction. 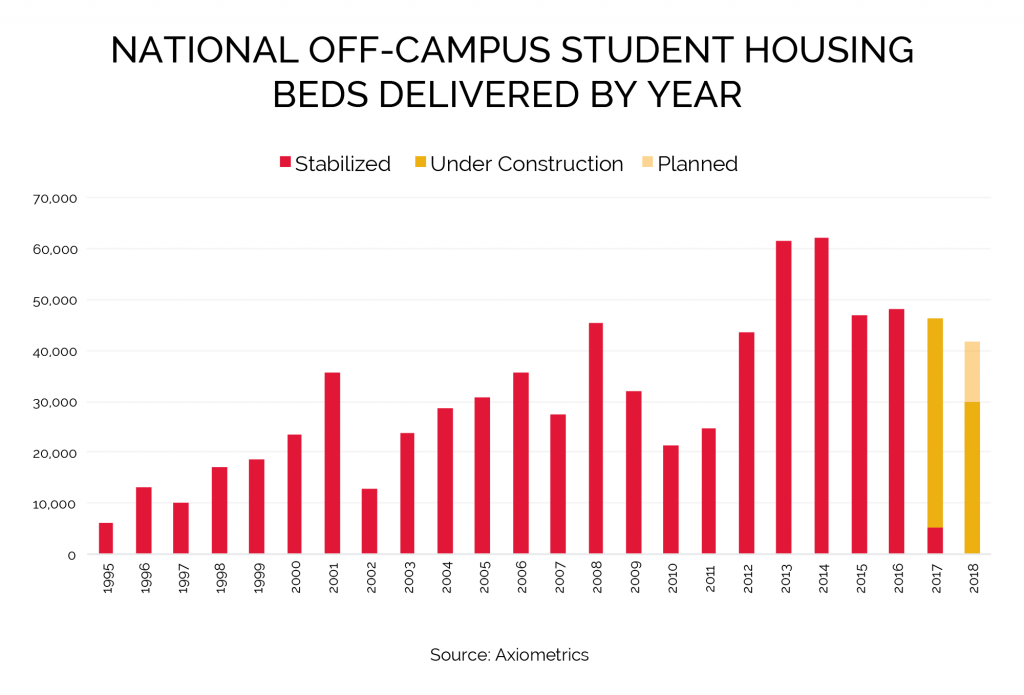 Texas universities continue to receive the most student-accommodation development, with four schools among the top delivery markets this year. Texas Tech is No. 1, with more than 3,700 new off-campus beds coming to market, but no off-campus supply has been identified for delivery next fall.

Texas A&M is expecting the second-most 2017 beds, and an additional 2,400 beds have been identified for 2018 delivery. Through 2017, more than 11,000 have been developed off-campus since 2011 at A&M. While none of the other universities in the list above have quite the same volume of supply, neither have they had the same amount of enrollment growth. However, most of the universities above will receive more new supply from 2015-2018 than the total amount of demand growth expected for the same timeframe, student housing research showed. 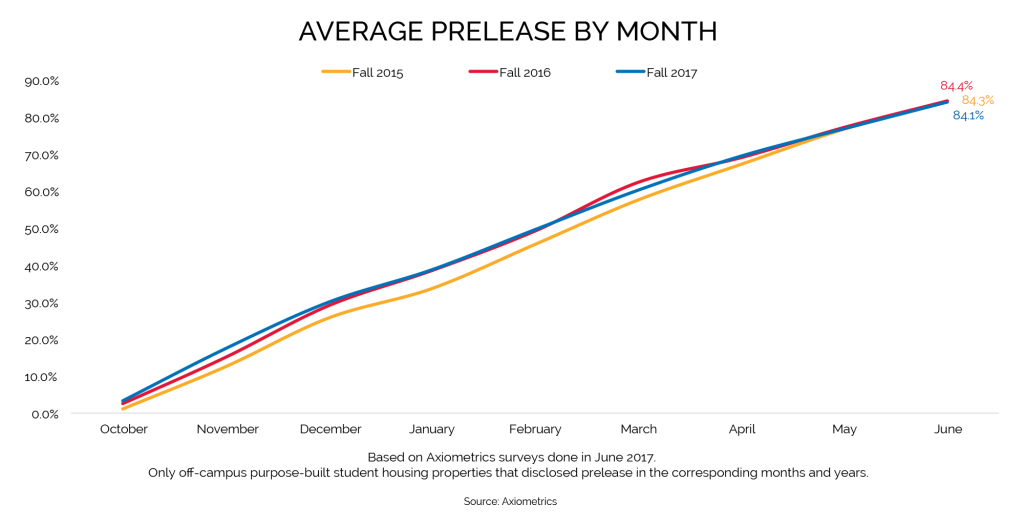 As the leasing season progressed, leasing velocity began to tighten. In March, then again in May, leasing velocity fell below last year’s pace, but still remained ahead of 2015 levels. As of June, leasing velocity remained below last fall’s 84.4% average prelease – though only by 30-basis-points (bps). While these are still healthy figures, moderation was anticipated after several years of record pace.

Trends at properties located at various distances from campus are different from each other. Typically, off-campus beds located closest to campus have the highest leasing velocity and are able to change a premium on rent. While this remains the case, the student housing industry is seeing moderation in year-over-year leasing velocity. 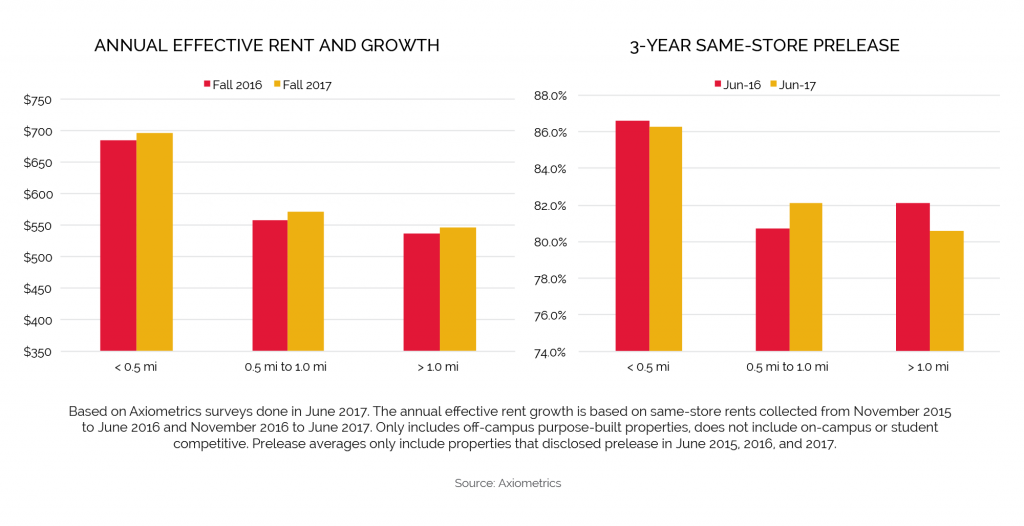 Prelease and overall performance at different properties and university markets are moderating, while many others are still showing stronger results. Several universities with the strongest performance have been among the top performers for several years. At the same time, many universities that had been weaker performers are strengthening or are no longer in the bottom spots. 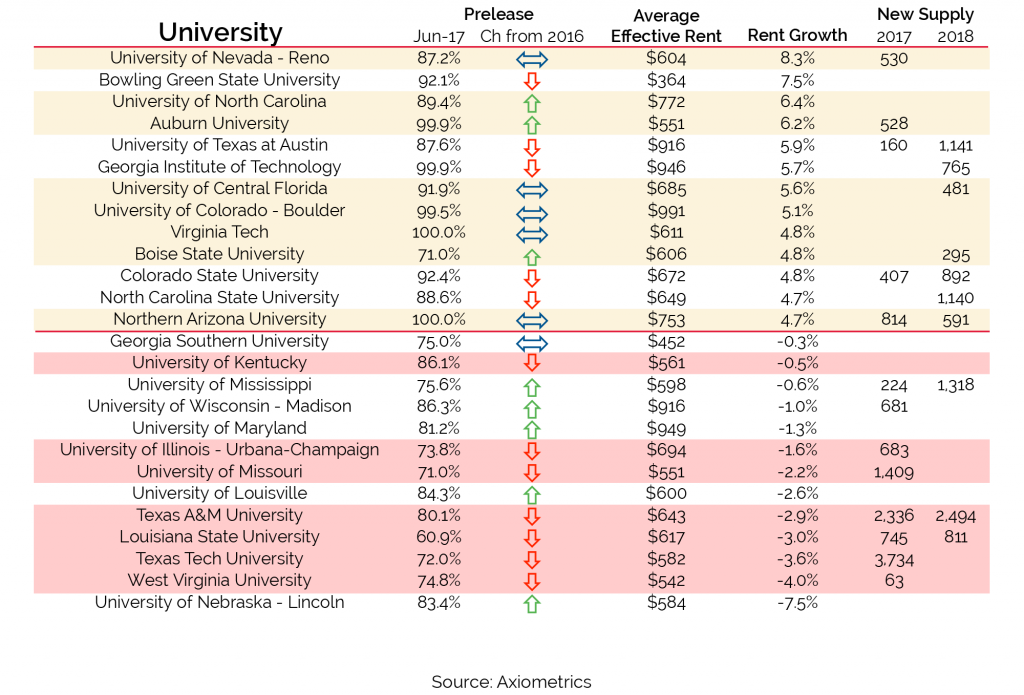 Overall performance across the student housing industry is expected to continue moderating the remainder of the leasing season, though some universities will continue to outpace the rest of the market.