Markets Where New Lease Trade-Out is Much Higher Than Renewals 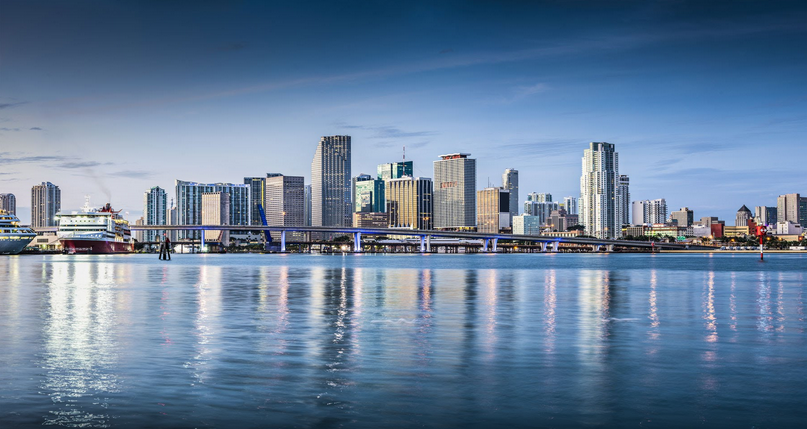 In the nation overall, a surge in leasing activity in recent months led to an all-time high in occupancy at 97.3% in September. With limited vacancies, new lease trade-out, which measures the change in rents when a unit turns over, hit more than 18.3% in September. This was the fastest momentum the market has seen since RealPage’s monthly reporting measures started tracking this trend in 2008.

Meanwhile, among renewal leases, trade-out rent growth was much more moderate at 7.5% in September. While notably behind new lease trade-out, that rate was still notably elevated compared to historical averages.

In some markets across the nation, however, the gap between the two rent change measures is much more pronounced. All six major Florida markets are in the national top 10 for this measure, and four of those are leading the nation, with rent growth between new resident leases surpassing renewal lease trade-out by 20% to 28%. In addition to Florida, a handful of West region markets are also on this list. 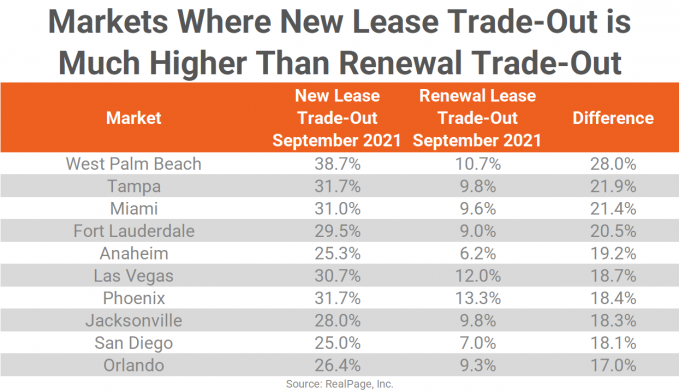 West Palm Beach saw the nation’s biggest gap between new lease rent growth and renewal rent growth. This was the nation’s strongest new lease trade-out market, with growth at a stunning 38.7% in September. Renewal rent growth was much more reserved at 10.7%, though that rate is still well beyond what this market typically sees for this measure. During the past five years, renewal trade-out have averaged closer to 4%. Occupancy in West Palm Beach is very tight right now. At 97.8%, the September reading was well ahead of the market’s long-term average and the national norm. This showing was achieved in spite of notable new supply volumes, which increased the existing base in West Palm Beach by 17.1% in the past decade, just a bit above the national norm of 16%.

Miami and Fort Lauderdale – the other two markets that make up the South Florida area – also saw lease trade-out significantly beyond renewal price increases in September. In Miami, new leases traded for 31%, compared to renewal rent growth of 9.6%. In Fort Lauderdale, new leases changed hands with rents that were 29.5% higher in September, while renewal rents were up by 9%. Both of these markets also logged solid occupancy as of September. Miami is Florida’s tightest market, with occupancy of 98.3%, while Fort Lauderdale’s performance was also strong at 98.1%. Supply has been big in these markets as well, with existing inventory growing by 15.6% in Miami and by 16.6% in Fort Lauderdale in the past decade.

Every other major Florida apartment market also logged new lease rent growth well ahead of renewal rent growth in September. Tampa’s new leases are changing hands at 31.7% rent growth, while renewals are trading out at 9.8%. Meanwhile, Jacksonville saw new lease prices increase by 28%, while renewals were up by 9.8%. These two markets stand out, however, as the most economically recovered major markets in Florida. As of August 2021, Jacksonville’s job base was only 0.4% away from pre-pandemic levels, while Tampa’s employment totals were only 0.9% away from a full recovery. While a number of smaller Florida markets are similarly close to rebound, the major markets nearby are still shy of pre-pandemic norms by roughly 4.6% to 8.1%.

Phoenix and Las Vegas recorded the nation’s most aggressive rent growth rates among renewal leases, with prices up 13.3% and 12%, respectively. Still, even those leading figures came in significantly behind the new lease trade-out showings of 31.7% in Phoenix and 30.7% in Las Vegas. Occupancy is tight at 97.6% in both of these West region markets in September. While supply has been notable in Phoenix, increasing the existing base by nearly 20% in the past decade, Las Vegas saw some of the slowest growth to its product base, which was up by just 10.3%. Las Vegas is also one of the least recovered job bases in the nation. As of August, the workforce here was still 8% behind pre-pandemic norms.