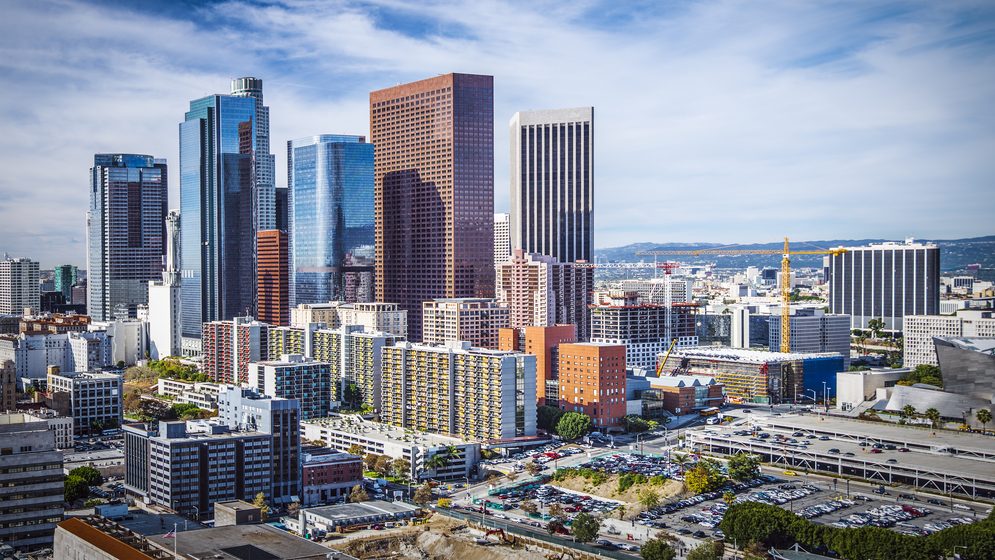 by   Chuck Ehmann
in   Los Angeles

Apartment completions in Los Angeles are about to soar to the highest levels in more than two decades.

More than 16,000 new apartment units are slated for completion by the end of 2019, an increase in the existing inventory base of 1.5%. By comparison, the average increase in Los Angeles’ apartment inventory since 2000 has been 0.5% annually. Los Angeles is the nation’s second largest apartment market, with more 1.1 million units.

Historically, Los Angeles sees about 5,700 new apartments built annually, a paltry amount given the size of the market. Dallas – with a population less than half of Los Angeles – averages almost twice that. This average new supply for Los Angeles has been pretty consistent, averaging 5,800 units per year since 2010 even as many markets around the country saw post-recession completions well above historical norms. The average increase in inventory growth for the top 50 markets around the country was 36 basis points (bps) for the pre- and post-Great Recession periods, but was unchanged in Los Angeles. 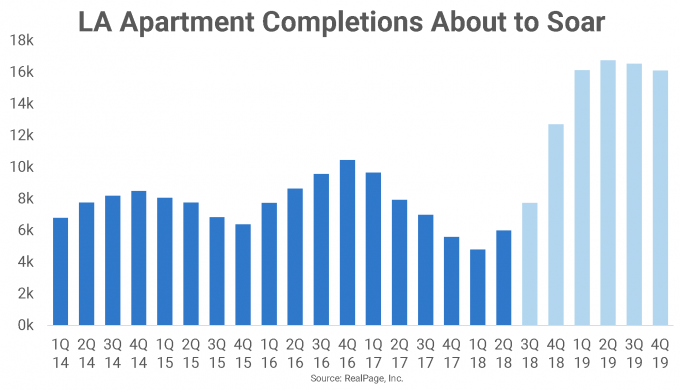 This unprecedented amount of new supply for Los Angeles begs the question, “Is this too much supply?”

Demand for apartments has averaged about 4,400 units annually in Los Angeles, and if counting only periods with positive absorption, almost 6,700 units are absorbed annually in growth years. But Los Angeles is a chronically undersupplied market where available inventory is scarce. So absorption is likely to increase as more units come online, but probably not to the same degree in the year ahead. Still, there should not be a significant drop in overall occupancy, currently at 96.4%.

In other words, there appears to be sufficient demand to absorb this bulge in new supply, especially long-term. Historically moderate amounts of new supply in a large and growing market like Los Angeles has created some pent-up demand for apartments, despite affordability concerns. With the high cost of single-family homeownership in LA, renting is still the most affordable option for many.

But there are pockets of the market where supply could have a greater effect – most notably, Downtown Los Angeles. 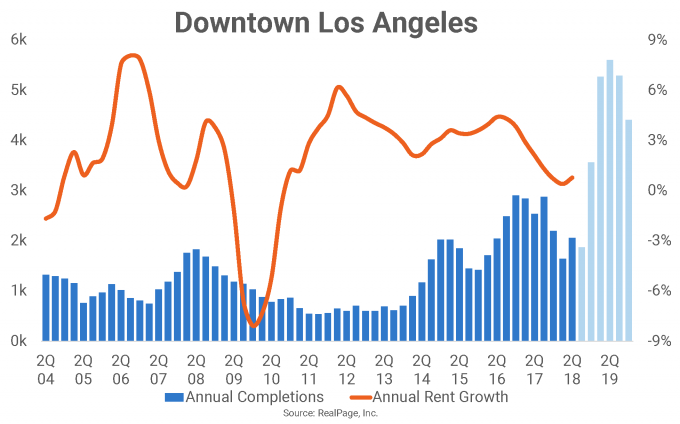 Strong absorption is expected for Downtown Los Angeles, mitigating serious oversupply concerns. Still, with about 4,400 units expected to come online by the end of 2019, occupancy should slip below 95% for a few quarters and annual effective rent growth will remain moderate, slightly below the submarket’s long-term average. Expect rent growth to soften further but remain positive in 2020, following the submarket’s pattern of delayed reaction to new supply.

The next three most active submarkets for significant new supply – both recent and forecast – are all adjacent to the Downtown Los Angeles submarket, creating the potential for some spillover effect on performance. In 2019, submarket completions are forecast to total 1,942 units in Mid-Wilshire, 1,784 units in Hollywood, and 1,198 in Burbank/Glendale/Pasadena.

Additionally, activity is ramping up in the Santa Monica/Marina del Rey submarket and near Warner Center in the Woodland Hills submarket, each with over 1,000 units expected to complete in 2019.