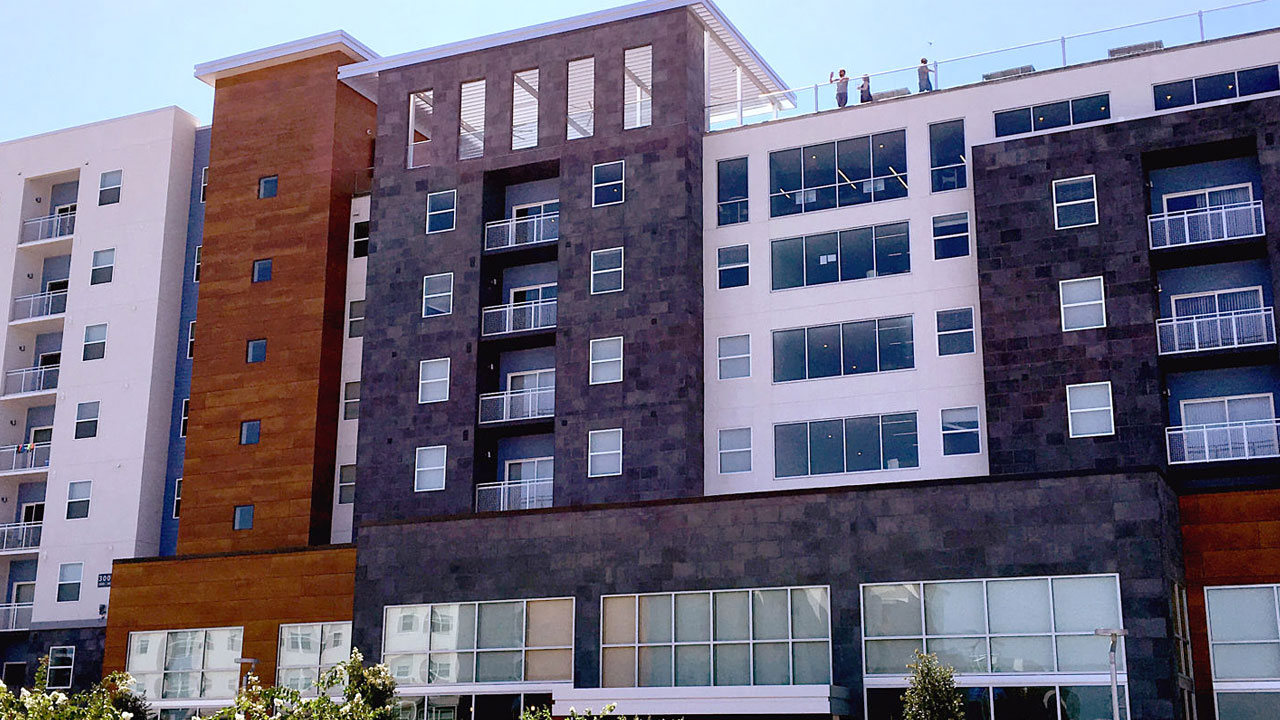 Moderation continues to be the trend in the student housing industry this year. With August quickly approaching, leasing velocity is slowing and rent growth remains compressed as properties try to fill the vacant beds for the fall.

Leasing velocity started off strong, with properties leasing earlier and faster in October. This pace continued until January when leasing slowed again, but properties were able to pick up momentum again after the spring semester was underway. The impact of potential supply and demand imbalances didn’t start to show in the leasing numbers until April, when prelease fell 147 basis points (bps) from last year. This has continued into May, with properties averaging 74.4% leased, though this is only is down 76 basis points from May 2017. 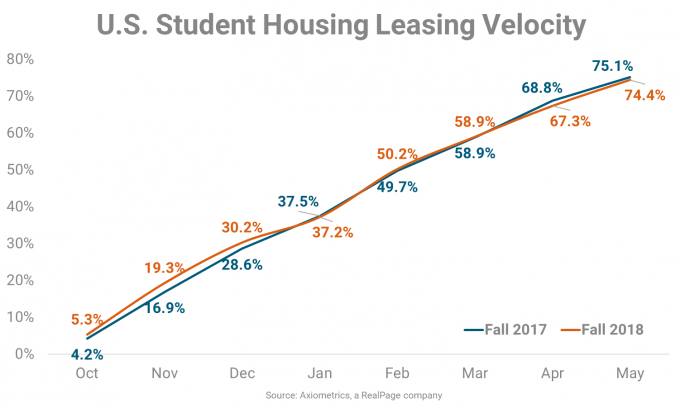 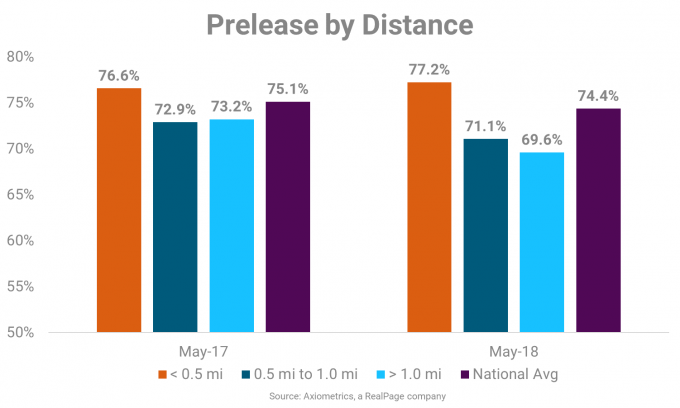 Meanwhile, effective rent levels are up 1.4%, which is a slight compression from recent years. And with more than 50% of properties seeing a decline in year-over-year leasing velocity, a larger impact on rent growth wouldn’t be surprising. But relatively few properties are dropping rents to fill beds, with only 26% of same-store properties are seeing negative rent change.

Properties closest to campus are not seeing sustained rent growth compression. These properties are seeing stable rent growth, which has averaged around 1.5% throughout this leasing season. That’s in addition to solid leasing figures.

Properties located between a half-mile and one mile from campus are seeing further compression in rent growth. In addition, leasing velocity is down more than 200 bps, averaging nearly 63% preleased. Those properties located furthest out are experiencing performance in line with expectations, as they’re more susceptible to new supply impacts. 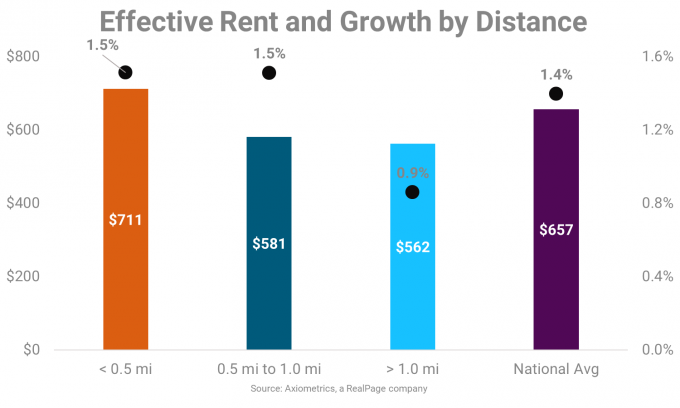 Developers increasingly targeting markets at tier 2 and tier 3 universities and an influx of institutional capital have helped this development cycle continue following peak supply levels in 2013 and 2014. For fall 2018 delivery, construction crews are wrapping up 47,000 off-campus beds and are starting construction on 30,900 beds for fall 2019 – with 10,000 additional beds identified but not started. These levels remain in line with recent years.

This is spread across 74 universities, of which 21 have new off-campus supply already identified for 2019. However, the universities expecting the most supply this fall continue to be larger, state universities. Many of those universities have seen steady to strong enrollment growth and university fundamentals, but also rank among the top for most supply this cycle. In addition, leaders for new supply continue to be concentrated in states such Texas, Florida and North Carolina, which have historically been leaders for off-campus student housing development.

The following chart illustrates the universities that are expecting the most beds this fall (on- and off-campus beds), all of which are expecting more than 1,000 beds. 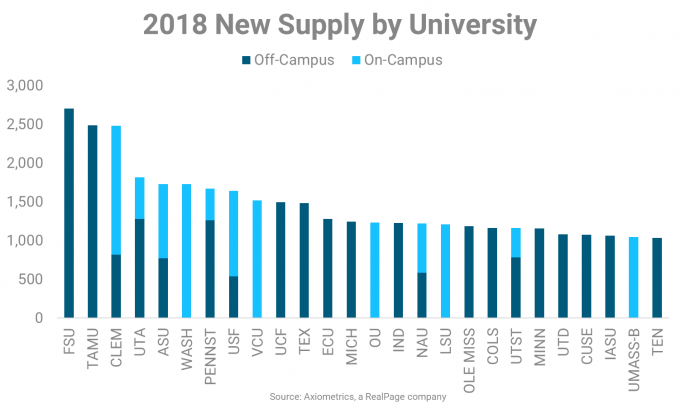 These universities are averaging 11.4% growth in total student housing inventory (on- and off-campus). Some are expecting more than a 50% increase in off-campus inventory: UT Arlington, Syracuse University, Utah State, UT Dallas and University of Massachusetts Boston.

In addition, the popularity of public-private partnerships continues to rise, and many universities are wanting to draw students back on campus with revitalizing, renovating and in some cases expanding their housing. This is creating additional competition and could potentially shift market dynamics for some universities, but also provide further opportunity for off-campus owners, operators and developers.

Throughout this leasing season, many properties struggled to keep leasing velocity in line with last year after supply picked up in select markets, and a few were still recovering from 2017 supply. Some of the leaders in terms of most supply coming online this fall aren’t all necessarily seeing a pullback in rents, but many are seeing a slowdown in leasing velocity.

The chart below compares the average effective rent growth and year-over-year change in prelease for the universities expecting some new supply this fall. 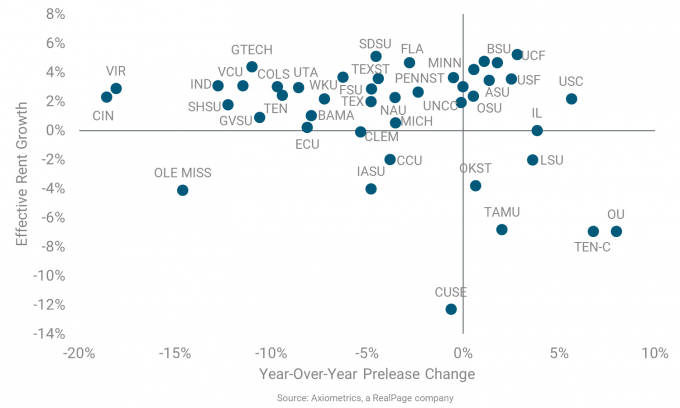 The majority of universities fall in the top left quadrant. As mentioned previously, more than 50% of properties are seeing a decline in prelease relative to last year, but most properties aren’t dropping rents. It’s important to keep in mind that while universities like University of Texas at Austin and Florida State aren’t necessarily seeing absorption issues, they’re anticipating new supply in 2019 and are projected to see flat enrollment growth, which could shift performance next year.

The universities in the top right quadrant are leading performers, despite new supply coming online this fall. The University of Central Florida, University of South Florida, University of South Carolina, North Carolina State and Boise State continue to outperform with rent growth averaging above 3.5% and prelease ahead of pace, averaging between 76% and 88%. A trend emerges across the top performers: they’ve all seen stable – and in some cases strong – enrollment growth and a steady flow of new supply.  Across these universities, less than 40% of off-campus supply at these universities was built in the current cycle – with the exception of Boise State. This has kept these markets from being oversupplied at the top-tier price points and coupled with enrollment growth has strengthened demand, allowing for properties to continue pushing rents while sustaining leasing velocity.

The universities in the bottom right quadrant – Texas A&M, LSU, University of Tennessee Chattanooga campus, Oklahoma State and University of Oklahoma – have dropped rents in order to sustain or improve year-over-year leasing velocity. However, among these universities, all but Texas A&M and Oklahoma State are anticipating new on-campus supply this fall and the off-campus supply may still be recovering from the impact of supply in prior years.

The universities in the bottom left quadrant are not only seeing negative rent change, but they’re seeing a decline in year-over-year leasing velocity. Syracuse University has seen rents plummet as a result of 1,000 new beds being developed. Leasing velocity is also slightly down from last year by 64 bps, averaging 63.4% leased, below the national average. Older properties and those located furthest from campus are seeing the largest impact from new supply. However, with nearly 90% of off-campus beds built in the current cycle, an affordability issue may be ahead with average prices ranking among the 10 highest at $945 per bed.

Universities such as Clemson, Coastal Carolina and Iowa State have never experienced this amount of new supply in one year, and are struggling to absorb the sheer volume of new beds. However, all three universities are projected to see enrollment growth this fall and in 2019, which will help stabilize performance.

While performance remains compressed for the student housing industry, oversaturation is more to blame than demand in most markets, and many will rebound as development activity moderates. In addition, opportunity still remains for top-performing universities and those at the tail end of recovering.