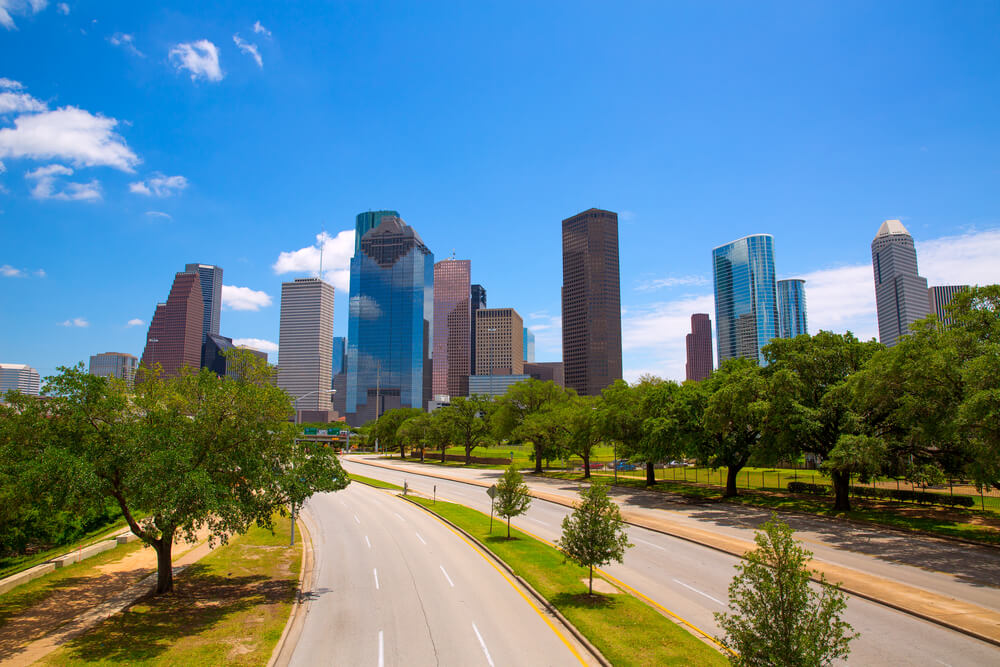 The Houston apartment market slowed in late 2015 and early 2016 as oil prices remained at long-term lows. Over that time period, the market lost more renters than it gained, darkening an already bleak outlook. But in 2nd quarter 2016, despite a still weak energy sector, apartment demand roared back – so much that Houston’s quarterly demand figure was the nation’s largest.

Houston absorbed 10,600 units in 2nd quarter, a decade high that topped demand levels in both New York and Los Angeles, two larger and more economically diverse markets than Houston. The performance was surprising given the turmoil in the energy sector – the primary driver of the Houston economy – and the most aggressive apartment development pace in more than two decades.

However, market segments most reliant on the energy economy and most affected by new supply drove the metro’s overall demand performance in 2nd quarter 2016. Absorption was concentrated in submarkets in the urban core and Energy Corridor, areas where energy sector employment is high and new apartment construction is centered. In particular, submarkets along the Sam Houston Tollway in the metro’s west side – Westchase, Far West Houston and Memorial – each absorbed roughly 700 units to 900 units, on net, in 2nd quarter 2016. Newer properties also bolstered the metro’s demand, though leasing was spread fairly evenly among product age niches. 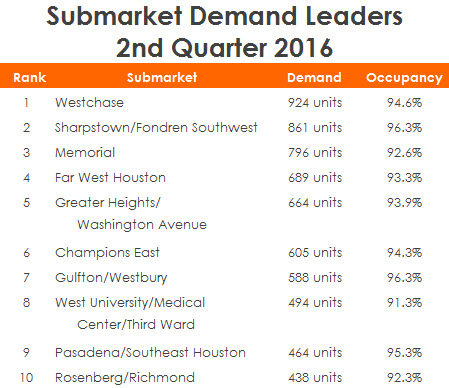 Even with strong demand in 2nd quarter, the Houston market is a step behind where it was prior to mid-2015, before the oil crash and apartment development wave began to influence performance. Occupancy registered at roughly 93% to 94% in each of the past three quarters, compared to 94% to 95% in the six quarters ending 3rd quarter 2015. Annual rent growth dropped to just 1.1% in 2nd quarter 2016, significantly less than the increases of roughly 4% to 6% in 2012 through 2015.

Slowing rent growth suggests that operators are pricing apartments in order to stimulate demand. But they face an uphill battle, as job growth levels have steadily fallen. Houston’s annual employment change recently hit a four-year low, as employers in the metro added just 10,000 jobs in the year-ending 2nd quarter 2016. Downsizing continues in energy-related sectors like Mining/Logging, Wholesale Trade and Professional/Business Services. Pain in those industries is likely to continue, as the U.S. Energy Information Administration forecasts West Texas Intermediate crude oil prices to hover around $40 per barrel for the remainder of 2016. That’s in contrast to 2014’s annual average of more than $90 per barrel.

Meanwhile, apartment development remains at historic highs. At the end of 2nd quarter 2016, a total of 38,630 units were underway. Of those, 31,706 units were set to complete by mid-2017, which would be the largest annual completion volume in more than two decades. By comparison, annual supply levels have averaged roughly 11,200 units since 1996. Over the next year, more than 15,800 units are scheduled to complete in the urban core and Energy Corridor submarkets alone.

New supply could continue to lift demand in the near term. But with the metro’s largest demand driver weakened by low oil prices, operators will likely struggle to fill new units. With market conditions not expected to change substantially, Houston should see demand quickly return to normal levels.