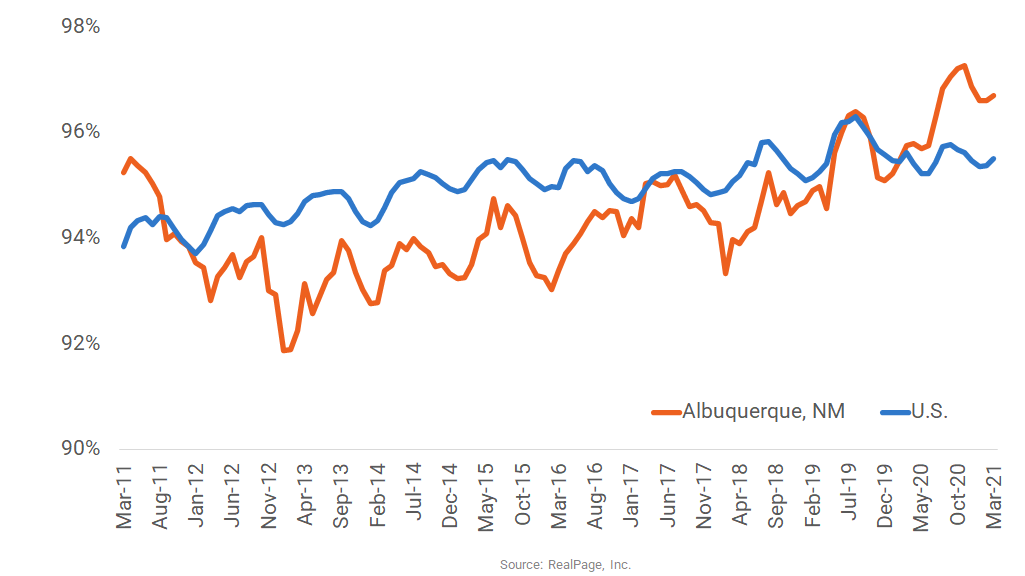 Apartment occupancy in Albuquerque is running higher than it has in at least two decades. As of March, occupancy was at 96.7% in New Mexico’s largest city. While that rate was a bit shy of the 97.3% peak seen in November 2020, occupancy remains higher than it has since RealPage began tracking the market in early 2000. In fact, occupancy in Albuquerque has only reached above 96% one other time in the past 20 years, when the rate was at 96.5% briefly in July of 2006. Solid recent growth pushed apartment occupancy in Albuquerque beyond the national average in March 2020, where it has remained since. Typically, Albuquerque occupancy runs below the U.S. norm. In the past ten years, apartment occupancy here has averaged at 94.4%, while the U.S norm ran a bit higher at 95.1%. During the COVID-19 pandemic and recession, U.S. occupancy has remained essentially stable. Despite the obvious economic challenges, rates have remained solid across most markets, with a few key exceptions in Texas and the Bay Area. While U.S. occupancy is at essentially the same level seen in February 2020, before the pandemic downturn, Albuquerque’s occupancy has increased by 120 basis points (bps).