/ Analytics Blog / Research & Trends / Will ‘Plexes’ be the Afterthought of Multifamily Housing?

The multifamily housing category of building permits for 2-4 units – comprised of duplexes, triplexes and fourplexes – is rarely in the news but, although numerically small compared to single-family and 5+ multifamily, they nonetheless contribute to the overall housing supply around the country.

Few people buy or build a multiunit “plex” property to house themselves and perhaps other family members. Some may occupy one-half and lease the other unit, but the vast majority of multiunit properties are for lease. They compete to some degree with apartments, for-lease single-family and rental condominiums or townhomes.

Some developers cater exclusively to this multifamily development style and build communities and neighborhoods a little at a time (and keep their debt load down), But a lot of the small-scale multifamily development around the country is more of a “mom & pop” operation. Small investors just getting into the real estate rental market can purchase a duplex or fourplex and reduce, if not cover, their mortgage payment with collected rent.

But are the days of the duplex going the way of the dodo bird? Based on the apartment construction trends in the following chart, it looks scary. From 1960-1987, the average ratio of 2-4-unit permits to total residential permits was 7.3%, with a few peaks and valleys in between. In fact, in the early 1980s, plex units comprised more than 10% of all residential units permitted. 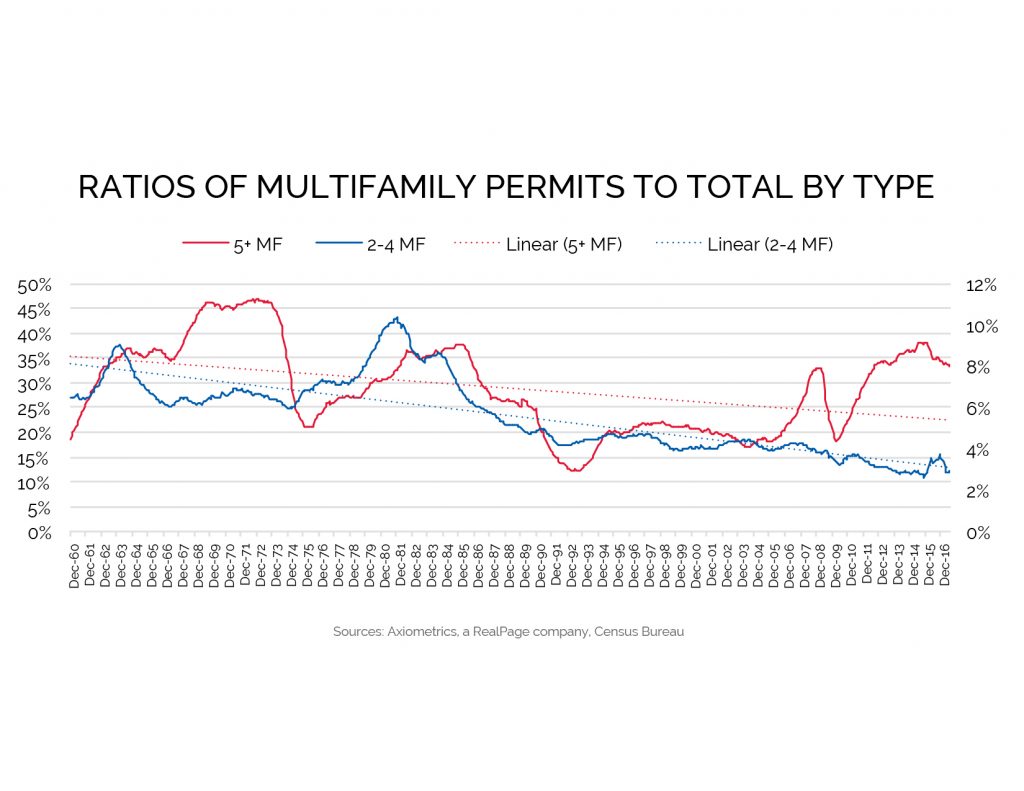 That ratio appeared to have leveled off at an annual average of 4.4% from 1988-2008. This period includes some strong national economic growth spurts, including the pre-Great Recession housing bubble. The year 2008 was also the last year the ratio exceeded 4%. From the time of the recession forward, the ratio of plex units to total residential permits has steadily declined. From 2009-July 2017, the ratio for plexes has fallen to less than 3%, averaging 3.3%.

Again, does this mean the eventual end of new development for 2-4-unit buildings? Not likely. As seen in the following chart, the number of 2-4-unit buildings has been increasing slowly since the Great Recession, along with single-family units, according to apartment construction trends. Historically, plex and single-family permitting have tracked closely together (the chart shows only the 1990-present period). However, it is evident that the gap in growth rates has increased between them since about 2013, with the exception of an unusually strong year in 2016 for plexes. 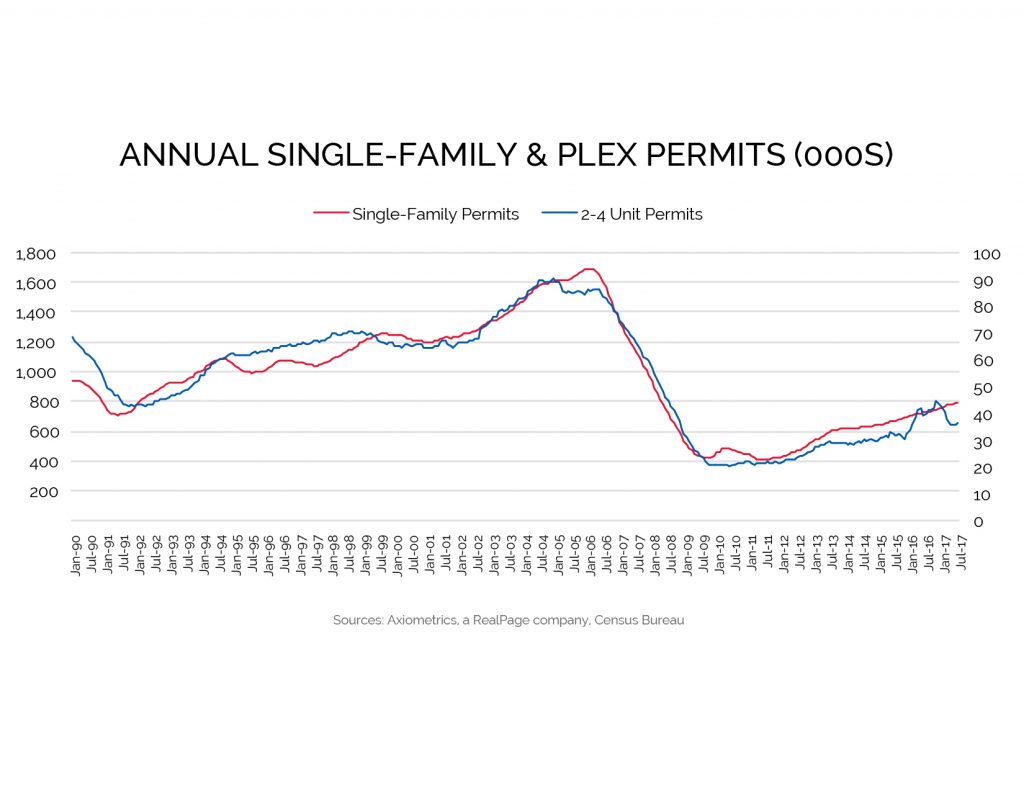 While the 2-4-unit housing option will not likely disappear, they comprise a shrinking share of total multifamily housing options. Competition from the huge increase in rental single-family properties (because of foreclosures from the housing bust) has dampened demand for attached 2-4-unit rentals. Why rent an attached property when you can have a home and yard to yourself? Eventually, some of these single-family rentals will return to the owner market as prices increase and demand continues, reducing the pressure on 2-4-unit rentals.