Who are Today’s Apartment Renters? 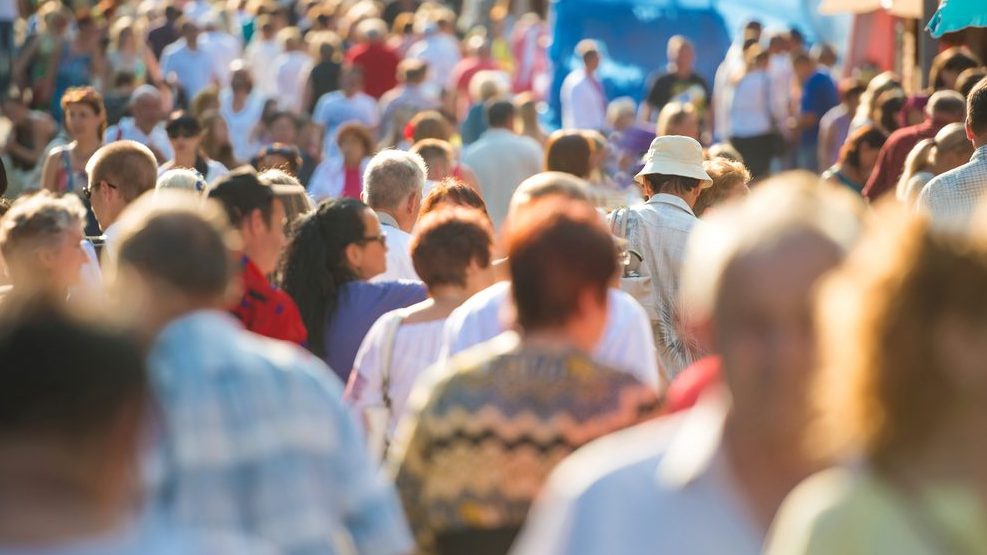 by   Kim O'Brien
in   Renter Segmentation

A downtown-dwelling 20-something with no spouse, no kids and a job in a high-paying profession.

This profile should sound familiar if you’ve seen any news coverage of the apartment market in recent years. It’s the person most often described as being today’s apartment renter. And to the casual industry observer, it might seem that’s the only type of renter in today’s market.

In discussions about the nation’s apartment market, renters often get lumped into one large group. But the reality is far more nuanced. To provide a more in-depth look at the apartment renter base, RealPage recently examined 5.7 million individual lease transactions in a statistical analysis of actual renter characteristics such as age, income, number of adults per household, marital status and the presence of children or pets in the unit.

Based on this analysis, eight distinct types of U.S. renter households emerged, as discussed in the latest RealPage Asset Optimization webcast. Going even further, some types of households are more prevalent in certain local markets and in certain product types than others. To identify these various local trends, 25 large metros and 25 smaller markets were studied across the country. 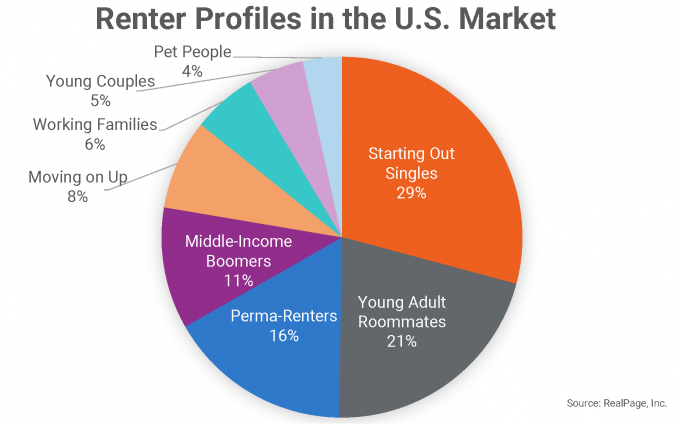 The biggest group identified, the Staring Out Singles cluster, made up 29% of the renter base examined. On average, these were the youngest renters profiled, at 26 years old. With limited incomes and high rent-to-income ratios, the Starting Out Singles move around quite a bit, choosing smaller units in Class B and C properties, usually in the suburbs. Only a small slice of this group gravitates toward Class C units in the urban core. Big metros heavy in Starting Out Singles include Indianapolis, Salt Lake City, San Jose and San Diego. Among the smaller metros, heavy concentrations of the youngest renters are in Salinas, Des Moines, Colorado Springs, Baton Rouge and Montgomery.

Despite accounting for a moderate share of the renter base, 16%, Perma-Renters are perhaps the industry’s most overlooked households. These residents, on average, are in their early 40s, single and always renew their expiring leases at least once. They have moderate annual incomes around $50,000, which allows them to afford Class B units in the suburbs without much of a strain on their budgets. Because these renters don’t move around as much as the younger crowd, their propensity to renew leases offers a valuable component to an apartment rent roll. Not surprisingly, this renter base frequently lives in metros where Class B apartments tend to perform especially well, with large concentrations in Las Vegas, Atlanta, Washington, DC, Dallas and Houston.

Middle-Income Boomers represent 11% of all renter households. While some of the affluent Baby Boomers are busy downsizing to luxury urban core areas, this more prominent slice of the Boomer rental population is not. Middle-Income Boomers report more modest incomes, possibly due to many of them drawing on retirement savings for day-to-day expenses. They are mostly single-person households, and are 62 years old, on average. Though a handful of these renters extend into the urban core, this group tends to live in small units, usually in Class B or C product in the suburbs. Among all renter segments, this group has the highest propensity to renew expiring leases. Middle-Income Boomers tend to reside in areas with slow-growth economies and retirement hubs. Among bigger markets, the top spots for these renters are Cleveland and Las Vegas, while small-market favorites are Sarasota, Grand Rapids, Wichita and Albany.

A smaller share, about 8%, of renter households is comprised of residents in their early 30s who are fueling demand for new, upscale properties. The Moving On Up renters are nearly always single and living alone, usually in downtowns or top-tier suburban locations close to large career centers. These renters prefer metros with higher for-sale housing prices, where purchasing can be a challenge in preferred neighborhoods. Large metros examined with the most share of Moving On Up renters were San Francisco, Denver, Los Angeles and Austin. Among the smaller markets, Knoxville logged the largest portion of this renter base.

Working Families account for just 6% of renter households, a number limited by the general preference of these families to opt for single-family rental homes, rather than apartments. Working Families are comprised of one or more children, but not always two adults. In fact, a sizable portion of this group is made up of single-parent households. The average age of the adult members is early to mid-30s. Working Families generally live in slow-growth suburbs, usually in the largest units in Class C properties. Interestingly, in big metros, the percentage of Working Families in the renter mix never reaches beyond the U.S. average. The top concentrations are only about 7% of the total in Orlando and Washington DC. Working Families comprise more of the renters in a few small markets, including Wichita, Palm Bay, Florida and Grand Rapids.

Young Couples comprise 5% of the renter base. Like the adult members of the Working Families segment, those in the Young Couples sector tend to be in their mid-to-late 30s and are more affluent than the younger renters in the Moving On Up category. Young Couples are comprised of two-adult households, and the members are nearly always married. These residents prefer new, upscale properties and focus on locations like San Francisco, Los Angeles, Denver, Boston, Chicago, Austin and Seattle – all higher barrier-to-entry markets. Like the Moving On Up renters, Young Couples gravitate toward markets with high for-sale housing prices. Thus, even with larger incomes, purchasing a home can be a challenge in these favored locations.

The smallest group, amounting to 4% of renter households, is Pet People. With two or more pets per household, these animal lovers are in their early 30s, with annual incomes averaging in the middle of the pack at about $65,000. They are living in a mix of one- and two-adult households. Denver is a large metro where Pet People appear more frequently, while smaller markets with concentrations of these households are Knoxville, Sarasota and Colorado Springs.