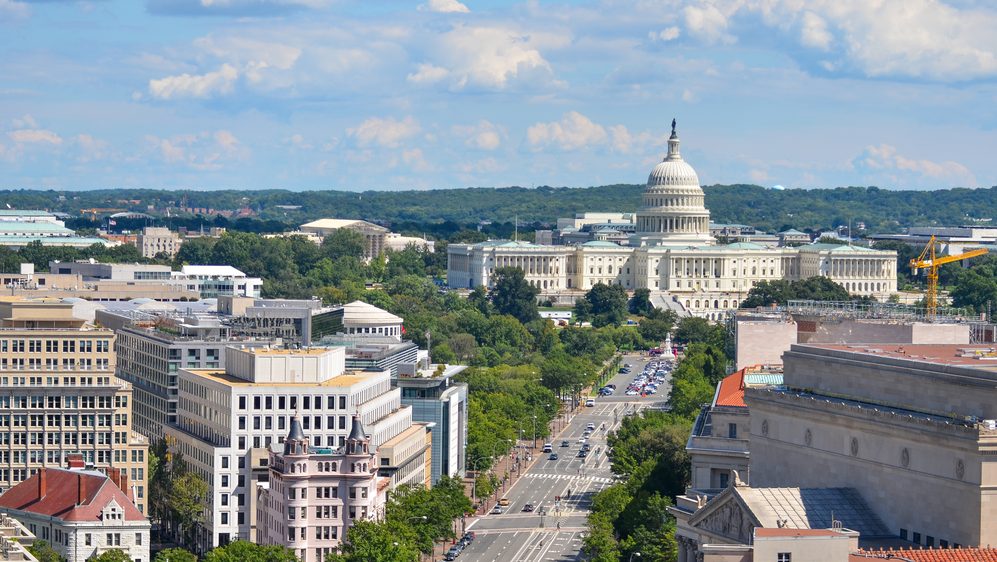 by   Kim O'Brien
in   Washington DC

Washington, DC has been one of the country’s key apartment building centers during the current economic cycle. The market has absorbed deliveries at a quick pace, holding occupancy relatively steady. The only sign of strain can be seen in the market’s rent growth pace, which has been among the nation’s weakest during the cycle.

Washington, DC was the nation’s #3 market for apartment deliveries in the current cycle, with a little more than 103,000 new units added to the apartment stock since early 2010. The only two markets recording more completions in the past eight years were Houston, which saw deliveries totaling almost 105,000 units, and Dallas-Fort Worth, where just over 132,000 units came online.

These completions have expanded the inventory base in Washington, DC by 17.6% since late 2009, before the cycle started. That’s comparable to the 17% increase in Houston and the 19% boost in D/FW’s inventory total.

Deliveries in Washington, DC during the current cycle were up significantly from the market’s long-term pattern. Throughout the 1990s and 2000s, new supply in metro Washington averaged about 7,000 annually. In the more recent decade, however, that average swelled to roughly 12,000 units. At its peak, annual completions got as high as 16,500 units at the end of 2014.

Washington, DC has absorbed these elevated completion volumes relatively well during the current cycle, due in part to a strong economy rife with high-paying jobs. This was one of the nation’s top employment growth centers in the past eight years. The Bureau of Labor Statistics reports that the metro has added 373,000 jobs since early 2010, and the median income, according to the U.S. Census Bureau, is $98,000, about twice the national norm.

In turn, Washington, DC absorbed roughly 98,500 units during the current cycle. Looking at yearly figures, demand has averaged at about 10,800 units annually throughout the past eight years. In the decade before the current cycle started, average annual absorption was much more reserved at just over 3,200 units.

As apartment demand kept pace with inflated supply volumes, occupancy in Washington, DC has held relatively steady throughout much of the current cycle, between 95% and 96% since about mid-2010. As of 3rd quarter 2018, Washington, DC is 95.9% occupied, notably ahead of the showings in the other top construction centers of Dallas/Fort Worth (95.1%) and Houston (93.8%). 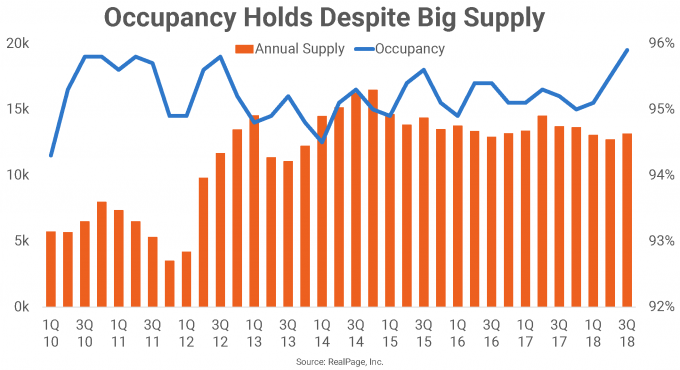 While the long-term effect of big waves of new supply hasn’t yet appeared in the occupancy story, Washington, DC’s rent growth performance is showing signs of strain. During the current cycle, rents climbed a total of 19.7%, one of the slowest growth rates logged across the country, and well behind the performances seen in the other new supply hot spots Houston (26.8%) and D/FW (37.3%). 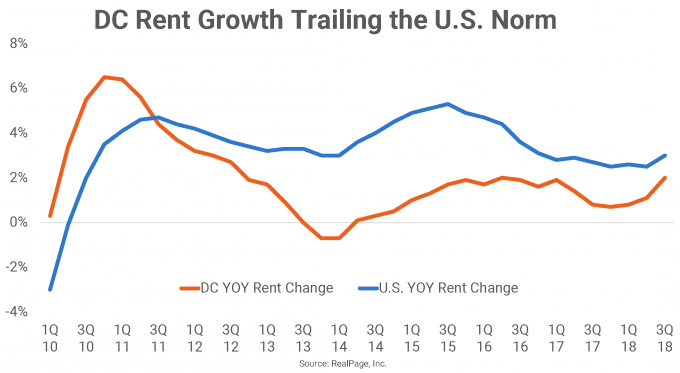 While Washington, DC started the current cycle strong, with, annual rent growth topping out at 6.5% in late 2010, operators quickly adjusted strategies, pulling back on price positioning until mild cuts befell the market briefly in 2014. In the past three years, rent increases have hovered between 1% and 2%. As of 3rd quarter 2018, annual rent growth remains soft at 2%, one of the weakest readings in the country. In comparison, D/FW registered annual price increases of just 1.7% (pulled down by the construction-heavy Dallas side of the metroplex), while Houston fared much better with growth ahead of the national norm at 3.6%.

Washington, DC hasn’t gone all the way through the development cycle just yet. Another 17,000 units are currently underway in the market, with about 13,000 of those expected to come online in the next year or so. These volumes, once again, place DC among the top markets for upcoming delivery volumes.

For more information on the Washington, DC market, including forecast details, check out the latest RealPage Asset Optimization webcast.