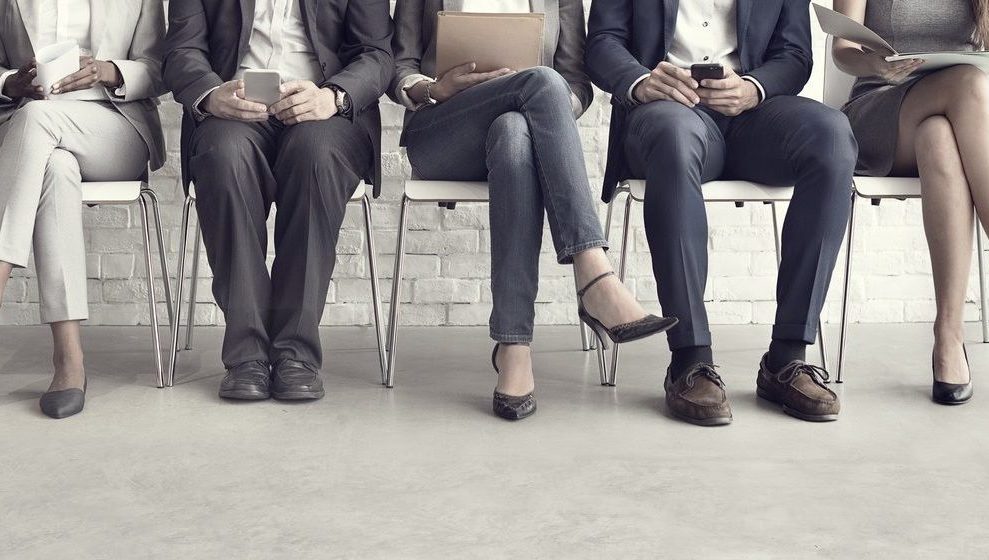 Recovery in the U.S. labor market has slowed as the number of COVID-19 pandemic cases has surged going into the winter months.

According to the Bureau of Labor Statistics (BLS), a total of 245,000 jobs were added to payrolls in November, well below economists’ expectations of about 460,000 jobs and also behind October’s revised figure of 610,000. Private-sector employment gains were almost 100,000 jobs greater as the government sector continued with Census-related layoffs.

Tightened restrictions on businesses and public events has slowed the momentum of the employment recovery and will continue to do so for the next several months. While few economists expected a V-shaped recovery, the prospects for a “swoosh-shaped” recovery appear stronger, although the tail may drag out further. In fact, some economists are noting the strength of the stock market and other indicators point to a K-shaped recovery, with high-income workers doing much better than their low-wage counterparts. The expiration of federal aid programs at the end of the year will further exacerbate the situation unless legislation is passed in the near future.

The U3 or “headline” unemployment rate fell to 6.7% in November, a decline of only 20 basis points (bps) from 6.9% in October, and the smallest decrease since the recovery began. Much of the decrease in the unemployment rate can be attributed to a decline in the civilian labor force (CLF) and the number of unemployed workers, as those whose benefits have run out and are no longer counted among the unemployed by the BLS has increased. The weekly total of initial jobless claims fell to 712,000 in the latest release, but a backlog of claims processing could point to a much higher figure than is reported. Economists expect claims to increase along with the pandemic resurgence.

As mentioned, the CLF declined by about 200,000 workers in November, and the participation rate dipped 20 bps to 61.5%. The CLF participation rate is still down 170 bps from November 2019. The employment-population ratio also declined, by 10 bps from October’s rate to 57.3% in November and is 370 bps below last year’s rate. The total number of unemployed (10.74 million) is about 326,000 fewer than October, but the number of employed workers decreased by 74,000 (in the household survey). The number of people not in the labor force who currently want a job has increased by 448,000 from October to 7.1 million currently.

With the sharp slowing of employment gains as the recovery falters, those industries that had benefitted the most from reopenings over the past few months have also seen the strongest reductions in recovered jobs in November. The Leisure and Hospitality industry saw monthly gains fall by more than 200,000 jobs, while Professional and Business Services’ gains dropped by about 130,000 jobs from the previous month. Still, all but the Government sector gained jobs in November, albeit at lower levels than recently. Further anticipated slowing could result in losses returning to those industries that have already borne the brunt of the pandemic recession. 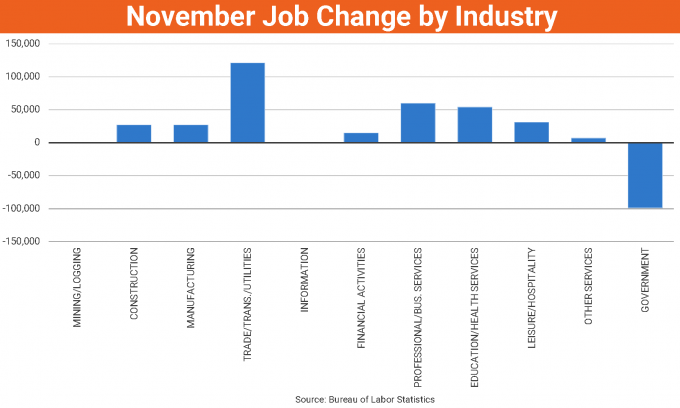 • Two-thirds of the Professional and Business Services industry’s gains of 60,000 jobs in November were in the lower-paying temporary help services sector (+40,100) as employers continue to temper their desire for full-time workers. The only other subsector with significant gains was the services to buildings and dwellings (+14,200) category.

• The Education and Health Services industry gained 54,000 jobs in November, but solid gains in the health care and social assistance sector of 59,600 were offset by a loss of 5,700 jobs in educational services. The nursing and other residential care facilities subsectors again lost jobs for the month (-14,100 combined), but doctor’s offices (+20,900) and home health care services (+13,000) posted gains.

• The Financial Activities industry (+15,000) spread monthly gains almost evenly between the finance and insurance (+7,300) and real estate and rental and leasing services (+8,300) sectors.

• The Other Services sector had a gain of 7,000 jobs in November, with the largest share of it in the repair and maintenance (+5,400) subsector. Personal and laundry services added 1,100 jobs for the month.

• The Mining and Logging industry posted a monthly gain of 1,000 jobs in November. The subsector of support activities for mining accounted for the bulk of that gain (+800).

• The Government sector was the lone drag on the economy for the month of November. Losses were again largely due to the release of temporary Census workers from Federal employment (-86,000), as well as local employment (-13,000). State-level government employment was unchanged from last month.