The performance momentum seen in the nation’s apartment market continued in July, when both rent growth and occupancy reached new all-time highs.

Effective asking rents jumped 2.2% just in the month of July, driving prices up 8.3% year-over-year. That annual rent growth shot past the previous record set in the 2000-2001 time period. 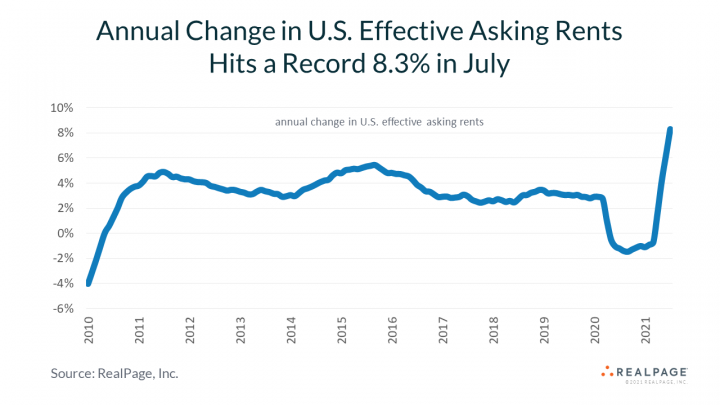 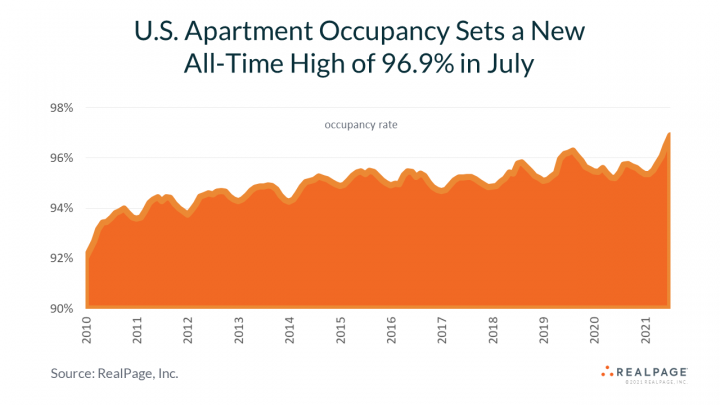 Momentum in the country’s apartment market performance metrics likely is peaking right now. Leasing activity normally begins to slow in the last half of the 3rd quarter. In turn, apartment property owners and operators tend to get a little less aggressive when pricing units. In similar timing, occupancy usually peaks in July or August and then backs up slightly as the year moves toward its conclusion.

Annual growth in effective asking rents comes in at more than 10% in 65 of the country’s 150 largest metros, including 22 spots where year-over-year price increases are at 15% or more.

Relatively small Boise, ID posts the most aggressive annual rent growth in that 150-metro group of markets, with pricing up 24.2%.

Looking specifically at bigger places with at least 100,000 apartment units, Phoenix registers 21.6% annual rent growth, and there are price hikes of roughly 19% across West Palm Beach, Las Vegas and Tampa.

Annual rent growth is at 15% to 17% across Jacksonville, Atlanta, Riverside/San Bernardino, Fort Lauderdale and Sacramento. 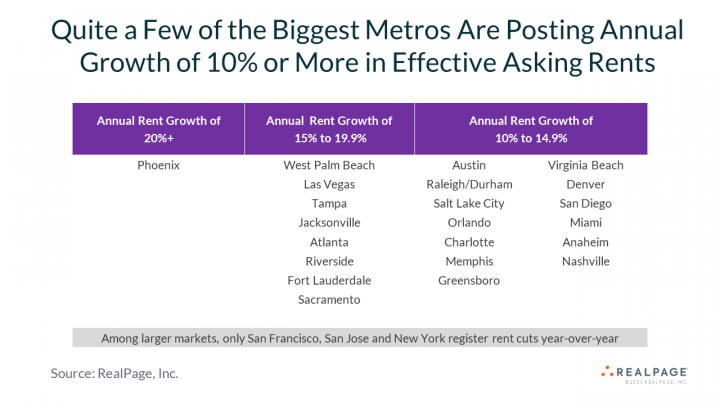 Most of the country’s key gateway metros that recorded rent cuts in 2020 now post moderate annual rent growth. Effective asking rents are up 4% to 5% year-over-year in Chicago, Boston and Los Angeles. Annual price increases around 2% to 3% are seen in Seattle, the Washington, DC area, Newark/Jersey City and Oakland.

The only other spot across the country suffering rent loss is the West Texas Oil Patch, where annual rent change is at -5.3% in Midland/Odessa.

Occupancy reaches 99% or better in a trio of small-metro locations: Salisbury, MD in the Eastern Shore cluster of small towns with fishing, farming and tourism-focused economies, as well as Allentown, PA and Eugene, OR.

Among big metros, occupancy leaders are Providence, Riverside/San Bernardino, San Diego, Virginia Beach and Anaheim. All have occupancy rates that reach 98% or better as of July.

Only a handful of spots register less-than-full occupancy rates.

Midland/Odessa continues to struggle notably, with occupancy at only 89.2%. The next lowest occupancy figure is the 92.7% in College Station/Bryan, TX.

Houston, San Francisco and San Antonio are the big metro occupancy laggards, but even in those locations the performance really isn’t bad at roughly 95%.