The U.S. apartment market has ended 2020 with sustained healthy occupancy but very mixed results across metros in terms of rent achievement.

December occupancy in the country’s 150 largest metros came in at 95.5%, only a hair under the year-earlier figure of 95.6%.

Influencing that performance, product demand stayed solid during 4th quarter, a period when normal seasonality tends to yield minimal product absorption. To some degree, then, demand typically seen when prime leasing season begins in the spring simply was pushed to a bit later when the economy had begun to recover some of the jobs lost in March and April. 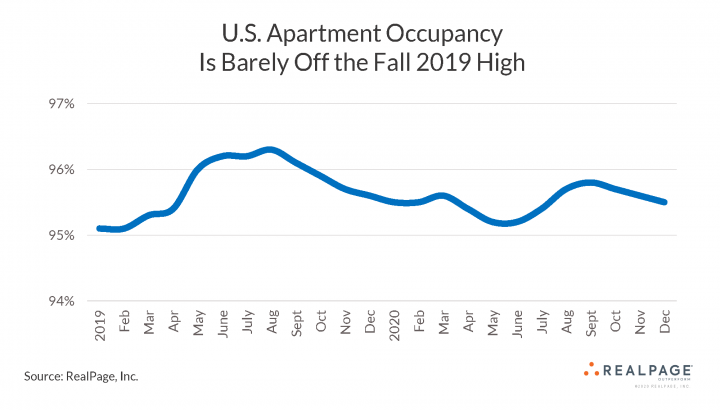 Even at its worst, occupancy in 2020 remained much stronger than the performance seen during the last recession back in 2008-2009. Going into that late 2000s economic downturn, occupancy was around 94%, and the rate got down to roughly 92% by the end of 2009.

The stronger occupancy level in 2020 has allowed rents to continue to rise – or at least hold steady – in most individual metros. However, there have been drastic price reductions in select big cities, with those losses pushing change for the nation as a whole slightly into negative territory.

Nationally, effective asking rents as of December were off 1% from the year-end 2019 figure. That December price point registered at $1,410 per month.

Pricing climbed between 5% and 6% during 2020 in Memphis, Virginia Beach and Phoenix. 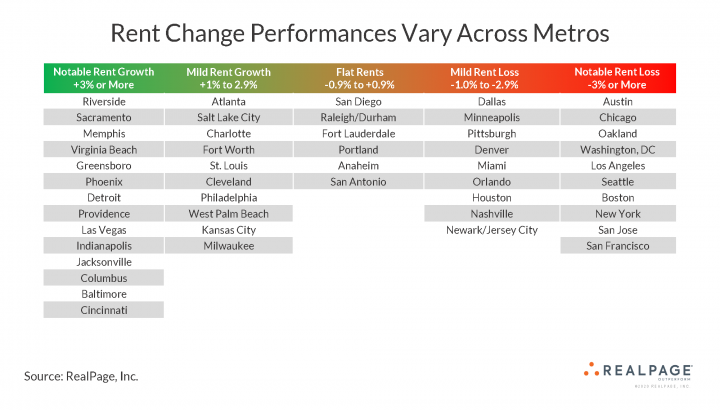 A couple of characteristics are shared by many of the metros that continued to register rent growth during 2020.

First, they’re comparatively affordable markets that are well positioned as the relationship between where people work and where they live is lessened. Note that Riverside and Las Vegas are picking up households leaving more expensive locations in Southern California, while Sacramento benefits from the Bay Area’s struggles, and Baltimore gains renters at adjacent Washington, DC’s expense.

Second, most (but certainly not all) of the rent growth leaders are locations where there’s modest construction activity. These metros are not experiencing the downward pressure of competitive leasing environments brought on by lots of brand new luxury properties attempting to build initial resident bases.

Moving to the other end of the performance spectrum, December’s effective asking rents dropped below year-earlier levels by roughly 20% during the past year in San Francisco and by about 15% in San Jose and New York. Annual loss came in at roughly 8% in Boston and around 5% across a cluster of metros that included Seattle, Los Angeles, Washington, DC, Oakland, Chicago and Austin.

Note that all of these metros are the highest-priced markets in their respective regions of the country, most commanding rents way above the national norm. For the most part, they also are adding quite a bit of new supply.

Within the 100 smaller metros that RealPage counts in the core results for the U.S. as a whole, a whopping 53 of them recorded annual rent growth of 3% or better. Most others registered slight rent increases or essentially flat pricing.

In the one key exception to that solid performance pattern, the West Texas Oil Patch’s Midland/Odessa area registered effective asking rents off a stunning 30.3% as of December.