Job losses are now limiting new household formation, with demand for apartments taking a hit. Occupancy is declining from near all-time highs that were achieved just a few months ago, and property owners are cutting prices to chase the households that are looking to rent.

May’s national occupancy level slipped to 95.2%. Occupancy has inched down 0.4 percentage points since momentum began to slide in mid-March. Spring is a time of year when occupancy normally tightens a bit, so the annual loss is more pronounced. May 2019 occupancy stood at 96%.

Among the nation’s 50 largest markets, only New York and Virginia Beach maintain occupancy in line with year-ago results. The biggest occupancy loss since May 2019 is a decline of 2.2 percentage points in San Francisco. Occupancy is off 1.3 to 1.6 percentage points on an annual basis in Orlando, Salt Lake City, Las Vegas, Los Angeles and Raleigh/Durham.

Annual change in effective asking rents is still at least slightly positive on an annual basis in 22 of the country’s 50 biggest metros. The biggest growth – gains of 2% to 2.9% – registers in Memphis, Cincinnati, Phoenix, Greensboro/Winston-Salem, Virginia Beach and Riverside/San Bernardino. 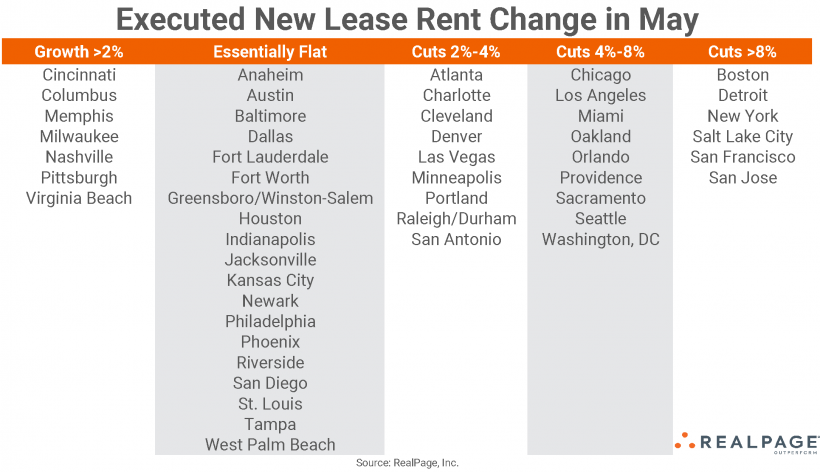