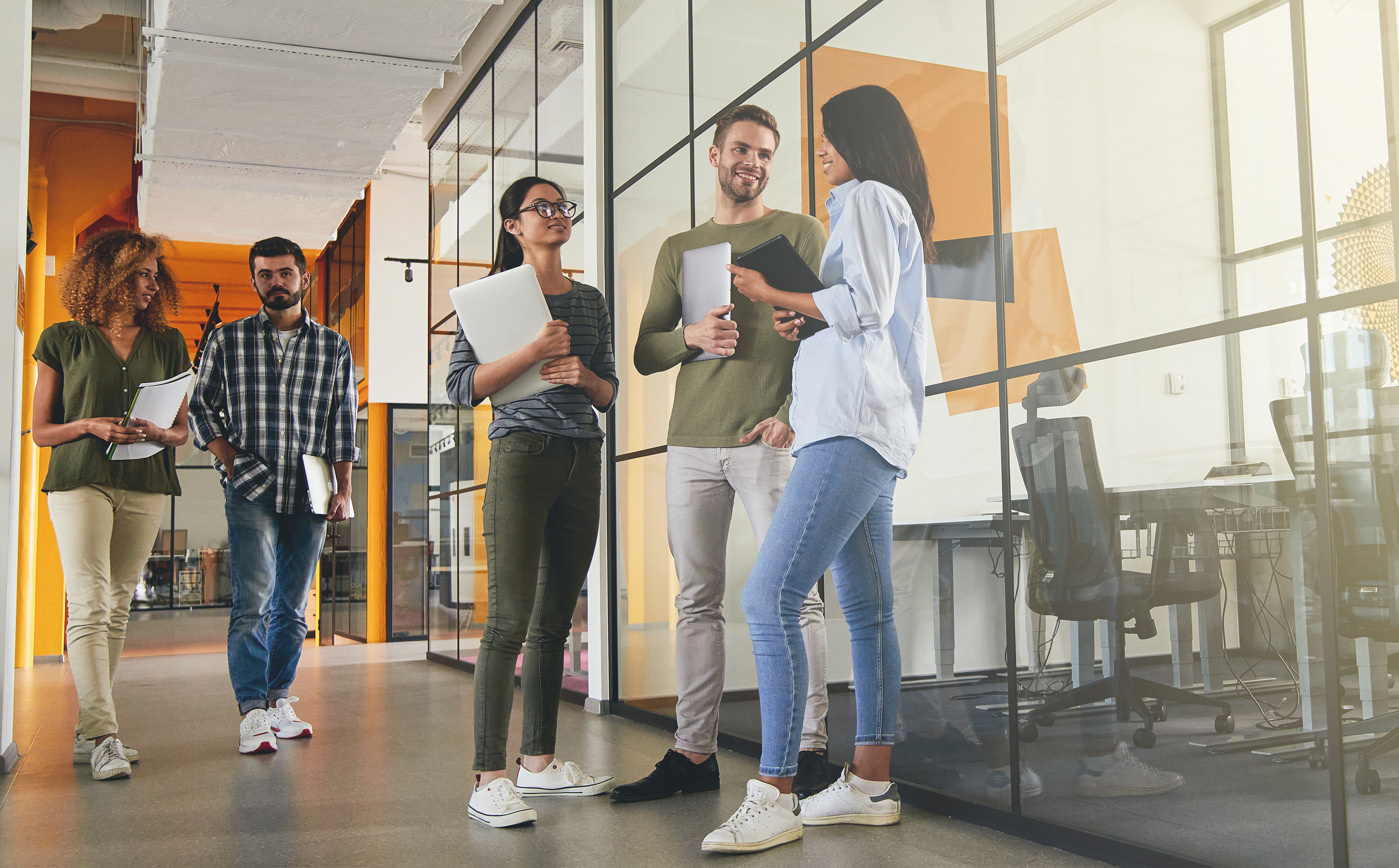 Roughly 372,000 employees were added to payrolls in June 2022, according to the Bureau of Labor Statistics (BLS). That was well above the roughly 250,000 additional positions forecasted by experts. Downward revisions to April and May combined showed 74,000 fewer jobs were added in those months than previously reported. Still, job additions in both months remained higher than economists had expected at the time. Despite recent gains, the nation’s total job count in June remained 524,000 jobs, or 0.3%, below the pre-pandemic level from February 2020. Meanwhile, the U.S. unemployment rate in June continued to hold steady at 3.6%. Unemployment has held steady since March 2022, at one of the lowest levels in over 50 years. 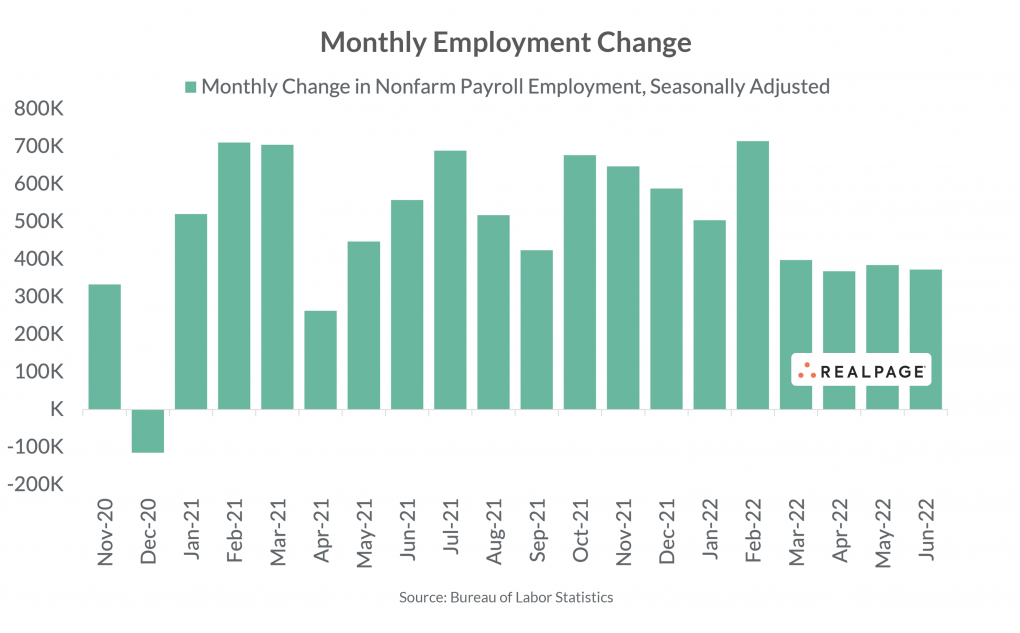 The jobs recovery in June was focused in private service-providing industries which added 333,000 jobs, while the goods-producing industries added 48,000 for the month. Notable job gains occurred in Education and Health Services (+96,000), Professional and Business Services (+74,000), Trade, Transportation and Utilities (+68,000) and Leisure and Hospitality Services (+67,000). Meanwhile, the Government sector was down 9,000 jobs. 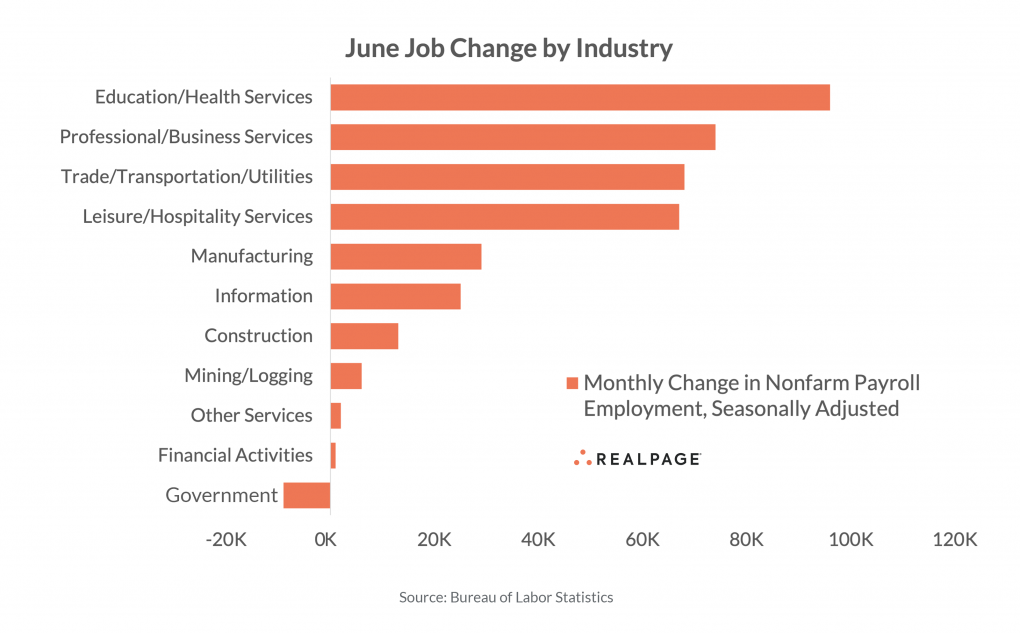 • Roughly 83% of the Leisure and Hospitality industry’s monthly gain of 67,000 jobs consisted of positions in the food services and drinking places (+40,800) and accommodation (+14,800) subsectors. The arts, entertainment and recreation sector added 12,100 jobs for the month, with 7,000 of those in the amusements, gambling and recreation subsector. Despite the recent job additions in Leisure and Hospitality Services, employment in this sector is still down by more than 1.3 million workers, or 7.8%, compared to the pre-pandemic level from February 2020.

• The Construction industry added 13,000 jobs in June with a gain of 11,400 jobs in the nonresidential specialty trade contractors subsector. Notable job losses were seen in residential building (-4,500). Construction employment is up by 46,000 jobs, or 0.6%, compared to February 2020 levels.

• The Other Services sector added 2,000 jobs in June. The largest contribution to that total was from the personal and laundry services subsector, which added 5,600 jobs. Repair and maintenance added 2,500 jobs. The membership associations and organizations subsector was down 5,800 jobs for the month. The Other Services sector is 260,000 jobs, or 4.4%, below the February 2020 level.

As of June, the number of unemployed persons was essentially unchanged at roughly 5.9 million. 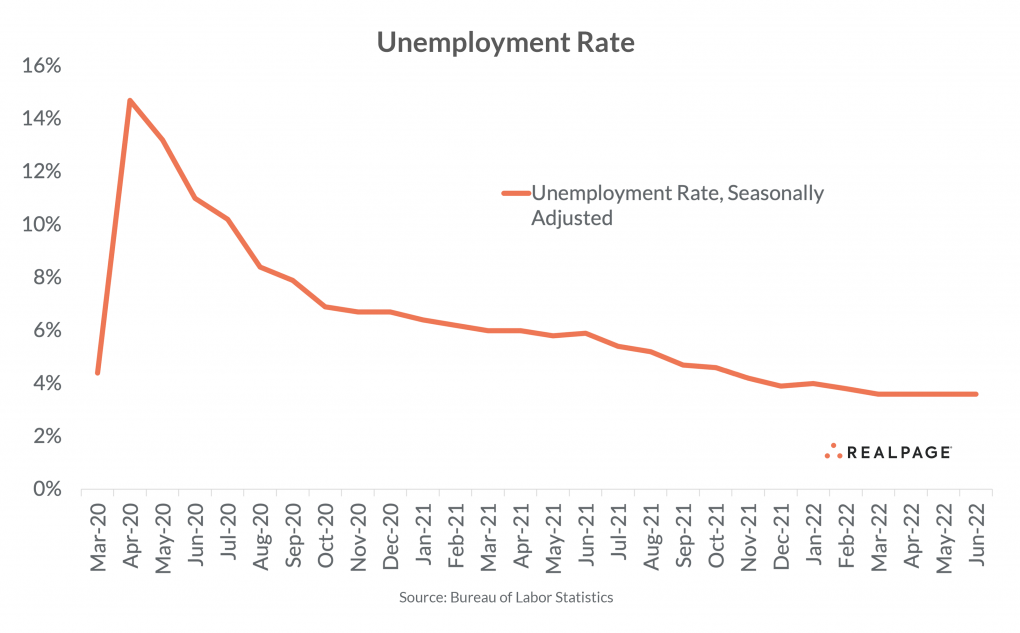 The highest industry unemployment rates (not seasonally adjusted) in June were in Leisure and Hospitality Services (5.2%) and Wholesale and Retail Trade (4.1%). The lowest unemployment rates were in the Mining (1.6%) and Financial Activities (2.1%) sectors.

The U6 unemployment rate (seasonally adjusted), which includes part-timers for economic reasons and marginally attached workers, inched down to 6.7% in June compared to 7.1% the previous month and 9.8% a year earlier.

Workers marginally attached to the labor force increased by about 32,000 from May to 1.5 million in June, while the number of discouraged workers stood at 364,000, down 51,000 month-over-month. Persons marginally attached to the labor force are those who currently are neither working nor looking for work but indicate that they want and are available for a job and have looked for work sometime in the past 12 months.

Industry wage growth varied greatly. Leisure and Hospitality Services average hourly wages jumped 9.1% year-over-year in June, as competition for restaurant and other service workers has had a dramatic effect on wage growth. Utilities and Education and Health Services workers both enjoyed a 6.1% annual increase in hourly wages. Professional and Business Services employees posted a 5.8% year-over-year increase and Construction workers saw an upturn of 5.6%. Most other industries averaged increases of 4% to 5%. The smallest annual increases in hourly wages were seen among Financial Activities (2.4%) and Other Services (2.9%) employees.

The percentage of workers that telework continued to fall in June as more and more companies are welcoming workers back into the office. June’s teleworking rate of 7.1% was below the 7.4% rate recorded in May 2022 and well below the 35.4% rate recorded in May 2020, according to the BLS’s supplemental data measuring the effects of the coronavirus pandemic on the labor market. The metric does not include employees who worked from home prior to the pandemic. The rate of teleworking will likely continue to remain elevated compared to historical norms as employers discover that remote working can act as a hiring and retention inducement that boosts employee morale while productivity remains close to previous levels.