Much has been written and discussed about the labor force participation rate (LFPR) and its steep decline after the Great Recession.

As seen in the preceding chart, the labor force participation rate has been much lower than even the current rate, but that was a time when women were coming into the labor force in large numbers.

The argument has been made that the labor force participation rate may never return to the levels it reached before the Great Recession. Others argue that with more than 94 million adults out of the labor force, the pool of potential workers is large enough to keep the current rate of job growth and gains going for some time. Perhaps something in the middle will occur.

One of the major reasons often cited for LFPR decline is larger and larger numbers of retiring baby boomers. While that certainly accounts for a significant portion of the decline, it could also be attributed to younger generations’ inability to maintain participation rates they have historically held.

The chart above illustrates the LFPR for the baby-boomer, Gen X and millennial generations from the time the oldest member of each generation reached working age (16) to current. The gold line represents baby boomers and runs from 1961-2016 for an age range of 16-71. In other words, those 16-year-old workers in 1961 reached age 71 in 2016. The oldest Gen Xers (blue line) reached working age in 1981 and were age 51 in 2016. Millennials (red line) hit working age in 1998, and their oldest members are about 34.

Charting each generation side-by-side by age reveals that all three generations have a short period of decline from age 16-19 as students leave the workforce temporarily before returning in force after college or military service. The large gap between boomers and the other two generations from ages 16-20 is likely the result of the aforementioned imbalance of men to women in the workforce in the early 1960s and the Vietnam War draft.

Gen X workers have had a much stronger arc in their participation rate compared to both baby-boomers and millennials – at least from ages 20-36 – but they came of age during some of the strongest economic growth periods since World War II. That age range for Gen X corresponds to the years 1985-2002, a period that had only two mild and short recessions.

From about age 19-26, boomers and millennial workers had very similar participation rates but diverged when the oldest millennials hit 27 and the recession took hold in 2009. Since then, millennial workers’ participation rates have underperformed the trajectory set by baby-boomers of a similar age, and the gap has only grown over time. The labor force participation rate of Gen X workers also has underperformed the same age range for baby-boomers over the past seven years, and although the rate is still good at more than 81%, boomers averaged an LFPR of close to 85% during their age 44-51 period.

Finally, the post-recession labor force participation rate for baby-boomers has seen a dramatic drop off, from 74.1% in 2009 to 53.5% in 2016. As mentioned previously, a large part of this is likely retirement (voluntary or not) as the age range of the oldest baby boomers moved from 64-71.

A final factor that could be affecting the declining LFPR is the size of the populations of each generation. As the name implies, baby-boomers were the largest generation in population that the country had ever seen. Now that many of them are retiring, it is taking a large percentage of the U.S. working-age population out of the workforce. To some extent, they are being replaced by millennial workers as they age into the workforce (the youngest millennials were age 16 in 2016), but as seen in the previous chart, their LFPR has not kept pace with the boomer generation of the same age. 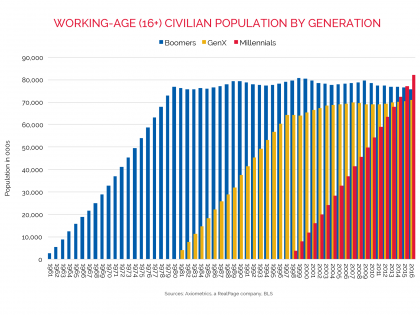 In the past few years, millennials overtook baby boomers as the largest generation by population (see chart above), but if they are unable (or unwilling) to join the labor force at or near the rates seen by previous generations, the long-term outlook for the country’s labor force may be stunted for several years.

Hiring in November Surprises, Pushes Unemployment Back to 50-Year Low