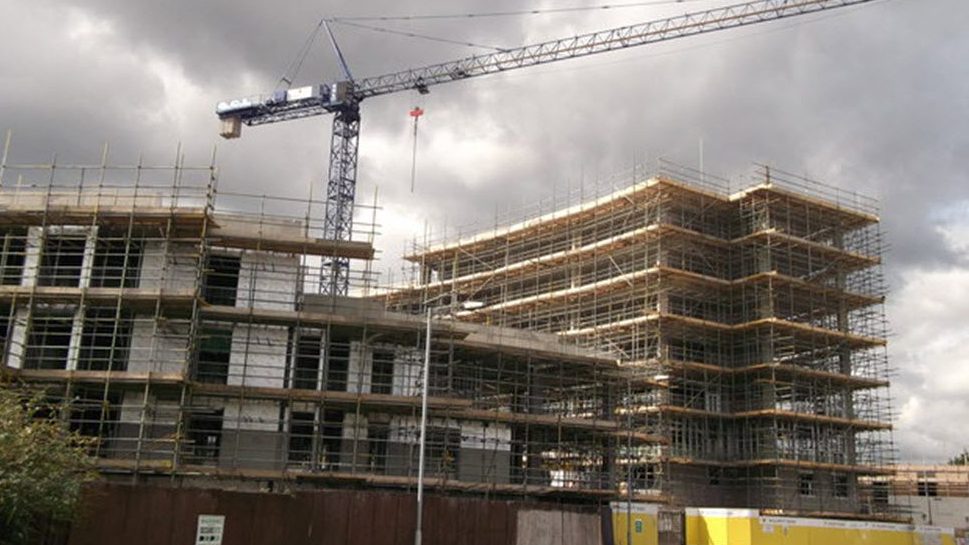 Annual multifamily starts were up 4% from last month to 470,000 units but were almost double the rate from one year ago, when the COVID-19 pandemic shutdown began. Multifamily building permits, which lead starts by a month or more, were 11.1% higher than last month at 559,000 units and were 44.4% greater than last April. In a sign that supply and price constraints may be delaying multifamily developments, completions for projects with five or more units were down 13.8% from March to 401,000 units. 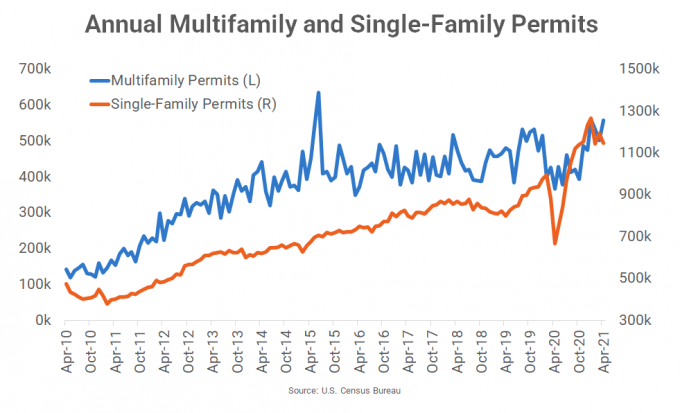 At the metro level, all top 10 permitting markets in April returned to the list from March but a few changed places. New York continues to lead the nation in permitting with about 34,700 units permitted, though that volume has slowed by 2,800 units from one year ago. Austin and Houston ranked #2 and #3 again but while Austin increased annual permitting to 21,500 units (up 4,435 units or 26% from last year), Houston is going in the opposite direction with permitting slowing by about 6,500 units, down 28.6% to an annual rate of 16,257 units.

Dallas was displaced one spot to #7 in April with almost 12,800 units permitted, but the Big D had a decline in annual permitting of more than 3,800 units, a 23% decrease. Nashville moved past Minneapolis-St. Paul into the #8 spot with an increase in multifamily permitting of 3,466 units to total 12,576 units for the year, while the Twin Cities slipped two spots from March to #9 with 12,489 units permitted through April, up only 870 units. 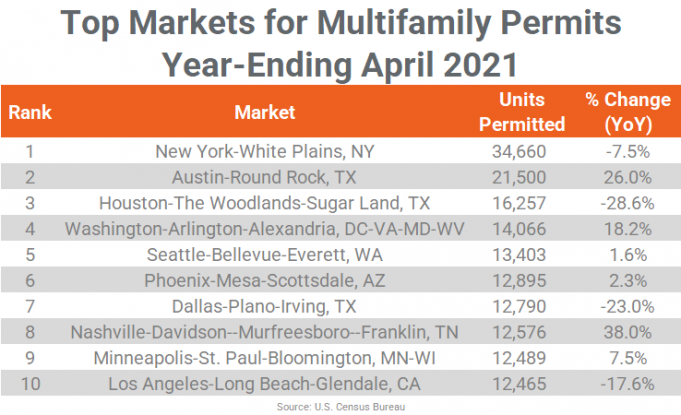 As mentioned, four of the top 10 permitting places had decreases in annual permits compared to one year ago with cutbacks ranging from 2,660 units (Los Angeles) to more than 6,500 units (Houston).

Eight of the top 10 had more annual multifamily permits than the previous month, with Houston experiencing a 7.3% increase from March’s annual rate, and four others increasing by about 4% to 5% – Washington, DC, Phoenix, Austin, and New York. Dallas, Nashville, and Los Angeles saw little change in their annual multifamily permit totals between March and April.

All but one of last month’s top 10 permit-issuing places returned to this month’s list with the first six remaining in the same order. The list of top individual permitting places (cities, towns, boroughs, and unincorporated counties) generally include the principal city of some of the most active metro areas.

The city of Austin retained the #1 spot for permitting places, followed by the city-county of Nashville-Davidson and the city of Los Angeles. Each permitted from 9,500 to 12,800 units.

The city of Houston came in at #4 on the list with about 7,900 units permitted while the city of Seattle ranked #5 with 6,600 units. The Brooklyn borough permitted close to 6,500 units for the year-ending April, about 250 units more than the market’s annual total last month. 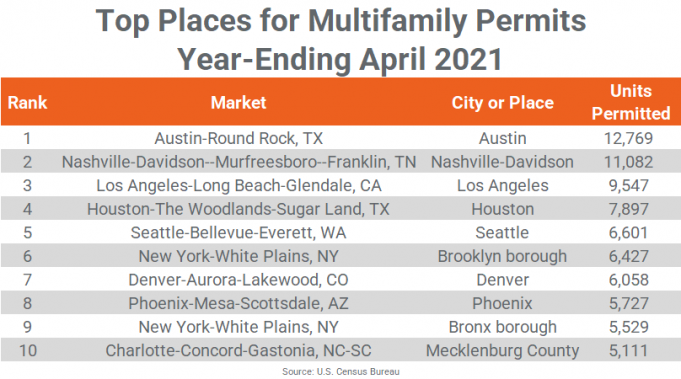 The city of Denver jumped into the top 10 permitting place list with almost 6,100 units permitted, ranking it #7, after the annual pace increased by 1,659 units from March. The city of Phoenix, the Bronx borough, and Mecklenburg County (Charlotte) round out the top 10 with around 5,000 to 5,700 units permitted.

The cities of Austin and Phoenix were the only permit-issuing places in the top 10 to see a mild decline in annual permitting from last month.