Universities with later start dates, or institutions that have fall classes starting Sept. 1 or later, usually means the purpose-built student housing properties in that market will open to students in the last week of August or in early September. Though this group of markets is smaller in terms of the impact on national trends and don’t necessarily have a shorter leasing period, properties in these markets illustrate somewhat of a different leasing pattern throughout the season.

On average, markets with September start dates began their prelease process in November and December, but leasing velocity was similar to earlier-starting markets by June, according to student housing surveys conducted by Axiometrics, a RealPage company. And by August, properties in September start markets surpassed the leasing velocity of the other markets. 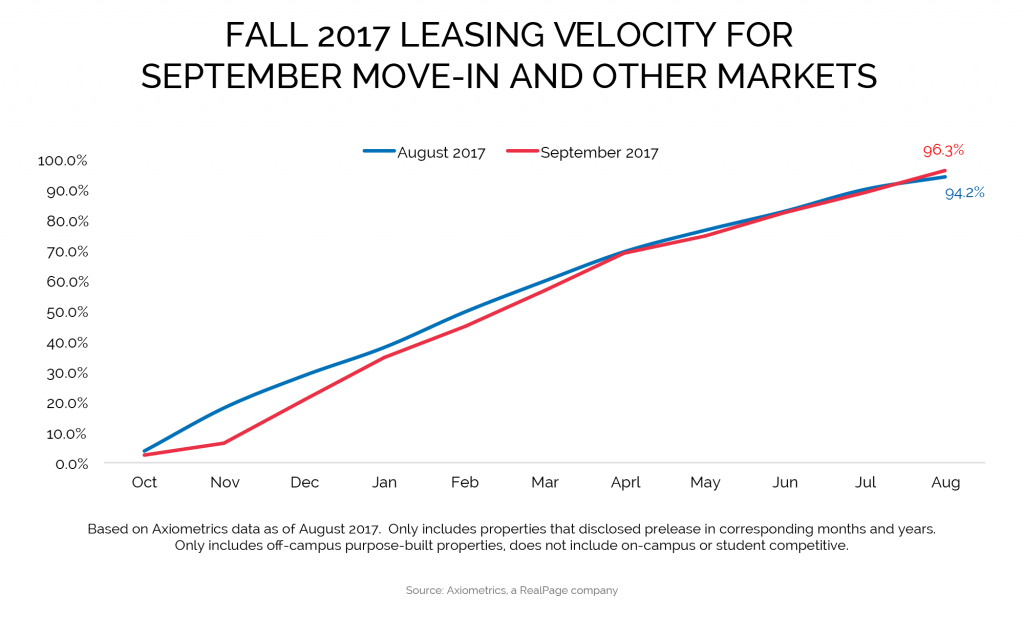 The prelease rate in most of the later-start markets was 95% or higher by August. One of the highest average prelease markets this season was the University of California–Irvine, which averaged 99.8% preleased in August, almost the same as last year. Western Michigan University’s prelease was above 99%, a 790-basis-point (bps) increase compared to last August, the student housing surveys found. 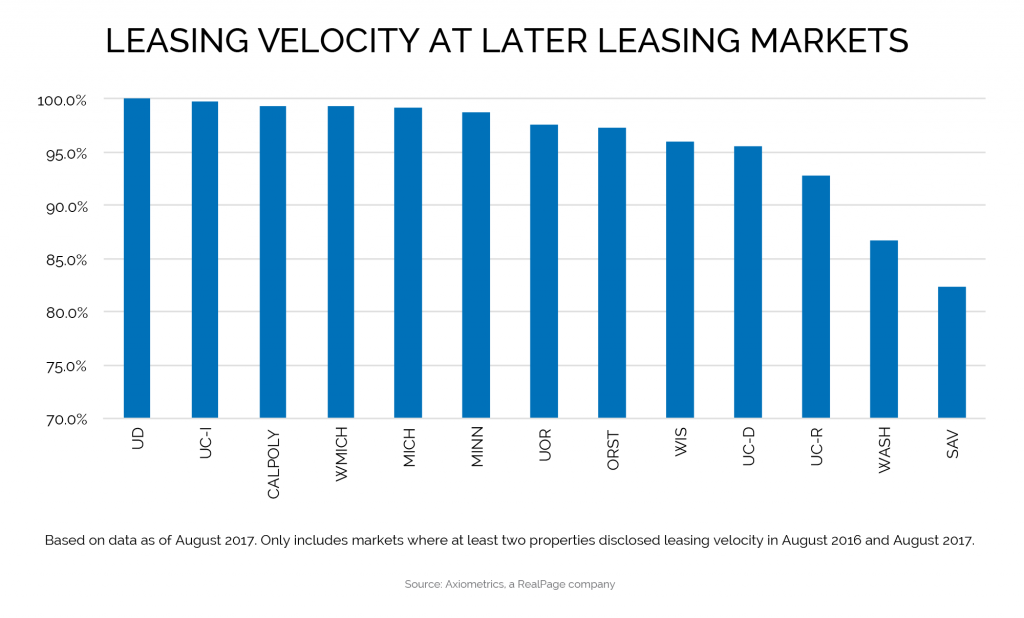 The University of Denver’s 11,000-plus students started classes on Sept. 6 and moved-in to their new residences the weekend before. Properties in this market started preleasing between November 2016 and January 2017, and collectively reached an average prelease of 100%, some 60 bps above August 2016.

The University of Wisconsin–Madison, with more than 40,000 students and 4,000 purpose-built beds, also started classes on Sept. 6. Several properties in this market scheduled their move-ins for the weekend before classes started – Labor Day weekend. Several properties at UW–Madison were completely leased by June. Student housing surveys found average prelease for the market in August was 96.0%, compared to the 83.0% of one year earlier.

The University of Minnesota began classes on Sept. 5. In turn, some student housing properties opened to students on Sept. 1, the Friday before classes started. Most properties in this market started preleasing in November, at about the same time that properties in other markets started. For the most part, these assets kept a strong leasing velocity throughout the season, which usually doesn’t happen when late-start markets begin leasing at the same time as earlier-start markets — partly because of the difference in class-start dates. Properties in this market reached a generally high velocity around June.

The average prelease at the University of Minnesota for purpose-built student housing properties was 98.7% in August, more than 100 bps higher than last August. Additionally, prelease for the market and individual properties can be expected to change slightly by the end of September.

Student housing properties in markets where classes start in September generally begin leasing later relative to the rest of the markets, but on average, reach similar prelease levels in a slightly shorter period.

Top Performing Submarkets in Each Large Market This Cycle