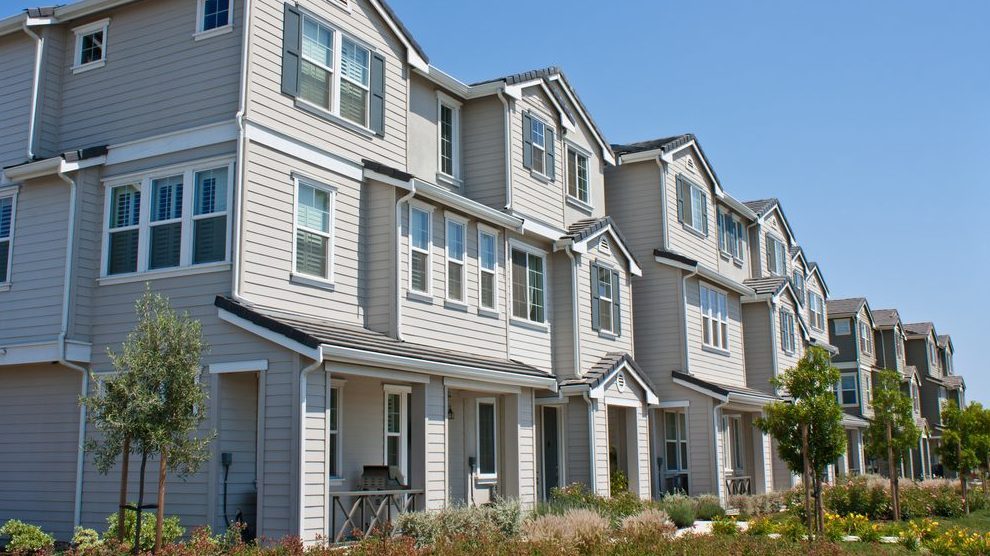 by   Charlotte Wheeler
in   Market Research

Large markets tend to get more attention, but some small markets are showing higher growth.

During the year-ending 1st quarter 2019, U.S. apartment rents grew 3.3%, in line with the cycle average. Though most markets across the U.S. are showing at least some rent growth, the nation’s most aggressive increases tend to be occurring in the smaller markets. In fact, of the 13 markets showing price hikes of 6% or higher in the past year, only two were among the 50 largest markets nationally: Phoenix (8.1%) and Las Vegas (8.0%).

Small markets are generally defined as those with fewer than 100,000 units. 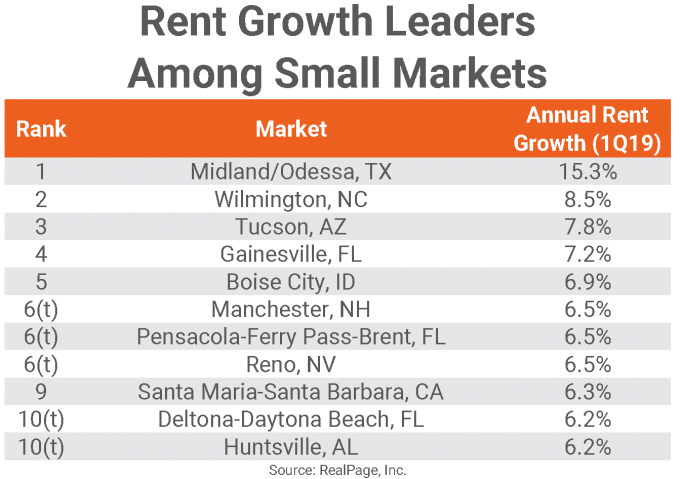 Midland/Odessa held onto its national lead recently, with rents climbing 15.3% in the year-ending 1st quarter 2019. Midland/Odessa has led the country for annual rent growth over the past two years, with increases averaging a stunning 30% annually. However, during the two years prior to that, Midland/Odessa ranked dead last nationally, as apartment operators slashed prices, averaging rent cuts of roughly 18% annually. Those cuts coincided with a steep drop in oil prices, a move that illustrates the volatile nature of the Midland/Odessa apartment market. The epicenter of the Permian Basin oil field, this market is dominated by the energy industry, and local apartment performance tends to track oil prices – which have been unstable in recent years. Averaging out the losses and gains, Midland/Odessa has recorded annual rent growth of roughly 5.7% over the past four years, with that performance barely ranking among the top 20 nationally.

Coming in at #2 among small market rent growth leaders, Wilmington, NC logged a price increase of 8.5% in the year-ending 1st quarter 2019. That was the second consecutive quarter of annual increases of roughly 7% or higher in Wilmington. Occupancy has also seen quite an increase recently, going from about 95% in 3rd quarter 2018 to roughly 97% in 1st quarter 2019. This sudden boost was due to increased demand after Hurricane Florence came ashore near Wilmington in mid-September 2018, knocking some units offline and causing some displaced residents to turn to apartments for alternative housing.

Gainesville, FL logged a price increase of 7.2% in the year-ending 1st quarter 2019, granting this market the #4 spot among smaller markets. This was the third consecutive quarter of annual increases above 7% for Gainesville, a record high streak for the market. Over the past four years, annual rent growth has logged notable progress, averaging roughly 5%, well ahead of the long-term historical norm of closer to 2%. Helping rent growth here, occupancy has tightened, as supply – unlike in the rest of the nation – has remained modest in the current cycle.

In Boise City, occupancy has remained tight, averaging 97.2% over the past five years. During that same period, rents increased an average of 5.8% annually. In the year-ending 1st quarter 2019, rents in Boise City were up a more notable 6.9%, marking the fourth consecutive quarter of prices hikes at or above 6.0%.

Manchester, NH has recorded sluggish job growth since the recession, averaging an annual employment increase of roughly 1% during that period. Despite this limitation, occupancy has remained tight thanks in part to muted supply. Over the past four years, occupancy averaged 97.0%, ending up at 98.0% in 1st quarter 2019. That recent occupancy reading was the tightest among the nation’s 150 largest markets. In the year-ending 1st quarter 2019, rents in Manchester climbed to an eight-year high of 6.5%, well above the market’s long-term average of 2.8%.

Reno, NV tied Pensacola and Manchester, with rent growth of 6.5%. This was Reno’s weakest performance since 2nd quarter 2015. Price hikes here had been elevated for five years prior, with annual increases averaging 8.0%. The recent cooling of rent growth levels in Reno coincides with supply levels increasing sharply over the past year and occupancy easing. Reno’s 1st quarter 2019 occupancy reading came in at 96.4%, below the long-term high of 97.8% recorded just two quarters earlier.

Huntsville, AL tied Deltona-Daytona Beach, with rent growth of 6.2% in the year-ending 1st quarter. This market has recently registered apartment market fundamentals well ahead of the local historical norm. While price hikes have come down from the 13-year peak recorded in 4th quarter 2018, increases are still well ahead of what is typical for this small market.