Single-Family Construction Continues to Slide as Multifamily Begins to Cool 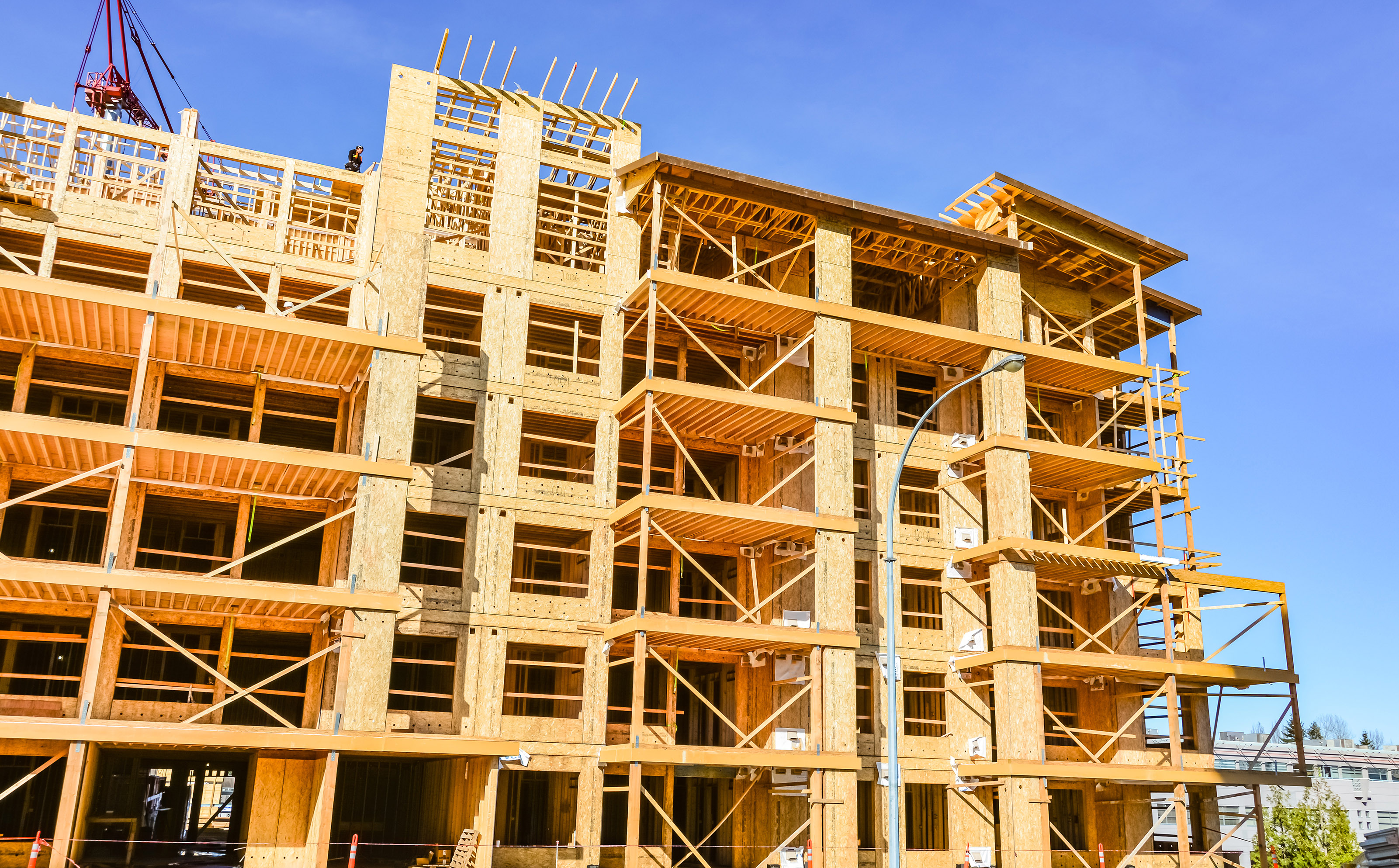 Rising mortgage rates added to already high construction and labor costs are giving more homebuilders pause as the number of homes permitted and started has fallen again for the third consecutive month.

Seasonally adjusted annualized building permits for single-family homes fell 5.5% from April to May to 1.048 million homes, while single-family starts dropped 9.2% to 1.051 million, according to the U.S. Census Bureau. Both data series are down from last year as well, with permits down 7.9% from last May and starts down 5.3%

Together, total residential permitting (including the small 2-to-4-unit plex data) is down 7.0% in May to 1.695 million units and total starts are down 14.4% from April to 1.549 million units. However, total permits are about even with last year’s pace while total starts are down 3.5% annually. Construction delays are piling up, as the number of units permitted but not started has risen 14.1% from last year, with the biggest increase in the multifamily sector (up 29.6% to 127,000 units). 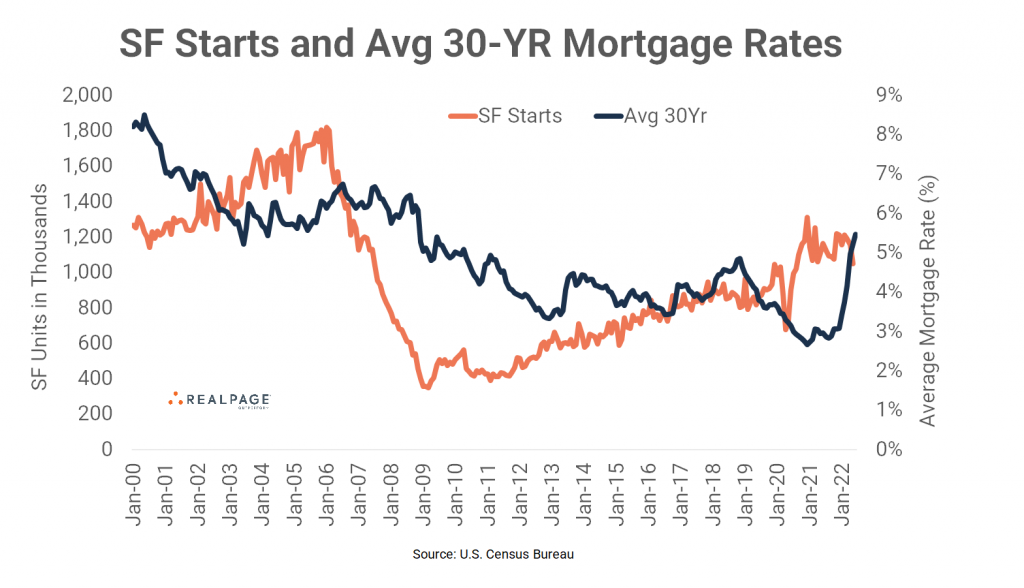 The sudden and sharp increase in 30-year mortgage rates from around 3% at the end of 2021 to close to 6% now may seem like a housing catastrophe, and for some potential homebuyers it is, but in the longer-term scheme of things, we are not even back to the level mortgage rates were hovering at during the peak years of the housing bubble build up in the mid-2000s. The old adage “people have to live somewhere” is still true, and as single-family homeownership has faltered lately, multifamily living is still an attractive alternative.

At the metro level, all of the top 10 permitting markets returned to the May list from April with the first six remaining in order, and only three others changing places. New York continues to lead the nation in multifamily permitting with 38,309 units, about 3,000 units more than last year. The potential expiration of a special tax incentive in New York may boost multifamily permitting in the short term in a scenario similar to what occurred in Philadelphia last year.

Austin remained at the #2 spot in May with 24,549 units permitted, followed by Philadelphia in the #3 spot with a total of 21,108 units. Dallas returned in the #4 spot with 20,262 units permitted, about the 2% more than last month’s annual figure. 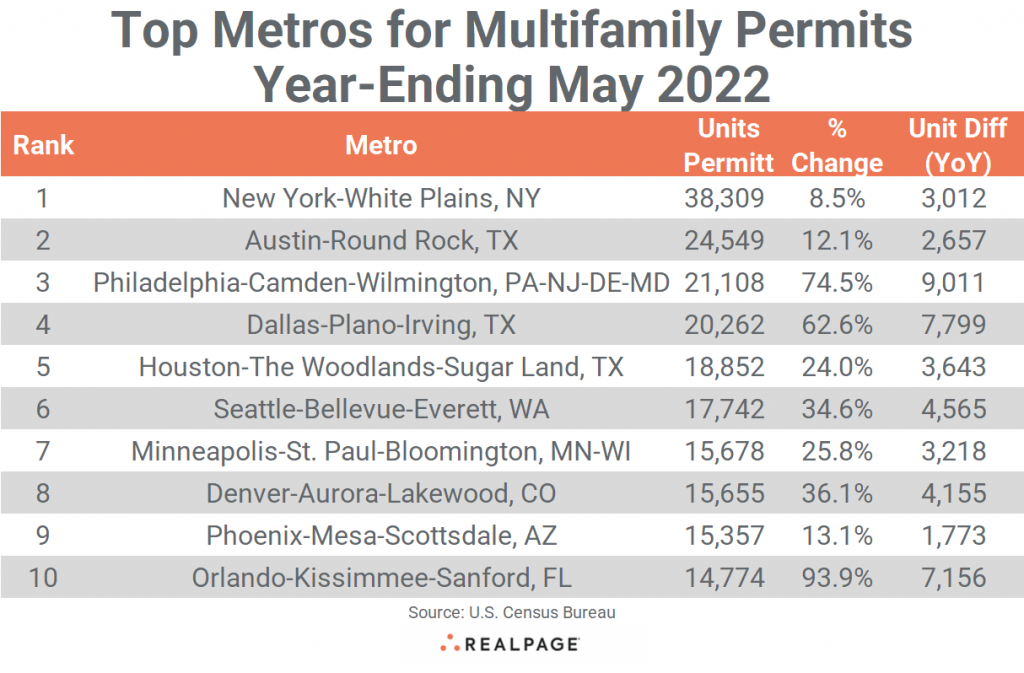 Minneapolis jumped two spots to land at #7, permitting 15,678 units in the year-ending May, about 3,200 units more than the previous year, with one third of that increase in the last month. Denver and Phoenix each slipped one spot, permitting 15,655 and 15,357 units, respectively. Both were up significantly from last year but both also declined slightly from last month.

Six of the top 10 markets had more annual multifamily permits than the previous month, with the aforementioned Minneapolis’ monthly gain of about 1,087 units from April’s annual totals leading the pack. Houston and Austin had strong increases from last month of 960 and 838 units, respectively. Orlando, Seattle and Dallas had milder gains in annual permitting totals from April to May.

New York and Denver were virtually unchanged from their April totals, while Phoenix slipped only 220 units, and Philadelphia dropped almost 1,100 units from their annual permitting pace from last month.

Below the metro level, nine of last month’s top 10 permit-issuing places returned to this month’s list with the first two remaining in the same order and several others changing places. The list of top individual permitting places (cities, towns, boroughs, and unincorporated counties) generally include the principal city of some of the most active metro areas.

The city of Philadelphia remained at the top of the list in May with an annual total of 17,884 units as the city’s tax abatement policy change caused a flood of permitting late in 2021 that is still felt today. The city of Austin returned as the #2 permit-issuing place, with 15,801 units, up about 1,000 units from last month.

Mecklenburg County (Charlotte) jumped from #6 to #3 in May, permitting 9,018 units for the year, while the city-county of Nashville-Davidson slipped to #4 with 8,254 units permitted, about 1,300 less than last month. 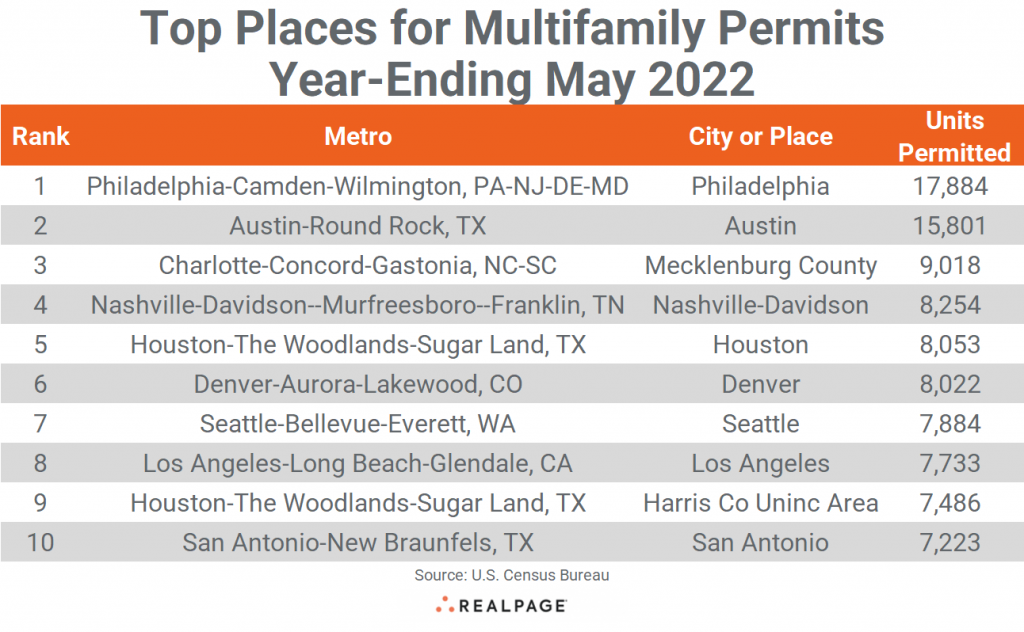 The cities of Houston and Denver moved into the #5 and #6 spots with 8,053 units and 8,022 units permitted, respectively. Houston increased by about the same amount that Denver declined (430 units).

The city of Seattle returned in the #7 spot with 7,884 units permitted and the city of Los Angeles tumbled from #4 last month to #8 in May, permitting 7,733 units. Unincorporated Harris County (Houston) was only the fourth permitting entity to return to the same place on the top 10 list this month at #9, permitting 7,486 units for the year. The city San Antonio edged the city of Phoenix out of the #10 spot with 7,223 units permitted, 840 more than last month’s annual total.