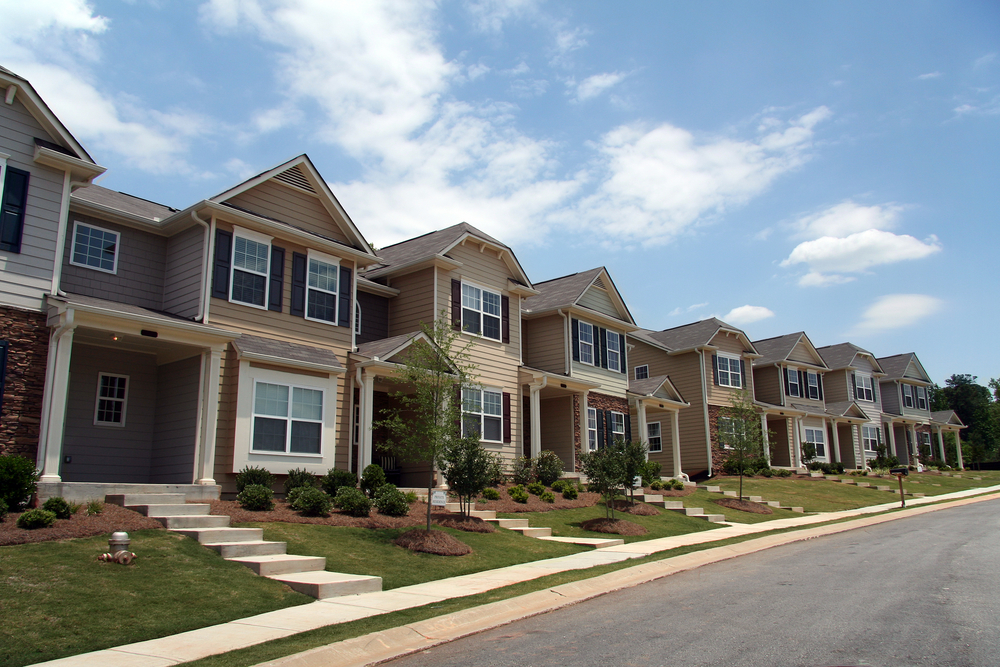 Investment research has long suggested that an urban-core strategy is the best way to deploy capital into real estate. While there are some definite advantages to adhering to an urban-centric strategy, it is not necessarily guaranteed to produce the most sizable returns. In fact, our research suggests that investing in the right suburbs will actually generate the highest returns adjusted for risk, regardless of the hold period.

MPF/YieldStar Research examined privately owned, institutional grade real estate across the top 50 markets using NCREIF (National Council of Real Estate Investment Fiduciaries) data, as well as YieldStar data on new apartment supply and market fundamentals. Properties were grouped into submarkets based on ZIP codes, and each submarket was classified as part of a CBD (central business district) or as suburban. Next, we took those two groups (CBD and suburban) and broke them into six. First, we split submarkets based on economic health of the parent metro area – markets with above-average job growth were separated from markets with below-average job growth. Second, we split suburban submarkets based on their average monthly rent levels. Submarkets with rents exceeding their parent metro’s average were separated from those with rents below their parent metro’s average. These two steps proved critical to the analysis. Given that roughly 90% of apartment assets are suburban, the breakouts clearly delineated between the strong and the weak. The resulting six groups are listed below.

For the purpose of this analysis, we’ll focus on the two top groups: CBDs and high-rent suburbs located within strong job growth markets. Our research showed once again that returns in “good suburbs” (suburban areas with both high rent and superior job growth) matched or exceeded returns in the strong urban-core areas – over multiple time periods. Apartment returns averaged 9.1% over the last decade in both the “good CBDs” and the “good suburbs.” However, when looking at three-, five- and 15-year time periods, apartment performance in the “good suburbs” outperformed their urban-core counterparts in each time period. And on a risk-adjusted basis (more on that later), the “good suburbs” outperform in all four time spans.

If these results are surprising, it’s because previous urban/suburban studies failed by lumping all suburbs together. The problem is that not all suburbs are equal. In fact, one group – low-rent suburbs in slow-growth markets – has proven consistently inferior to all others. And regardless of rent level, the clearest factor in shaping NCREIF returns was a rather simple one: the economic health of the parent metro. Slow-growth markets produced meaningfully weaker returns than high-growth markets, even in spite of far more new apartment construction in the high-growth metros. 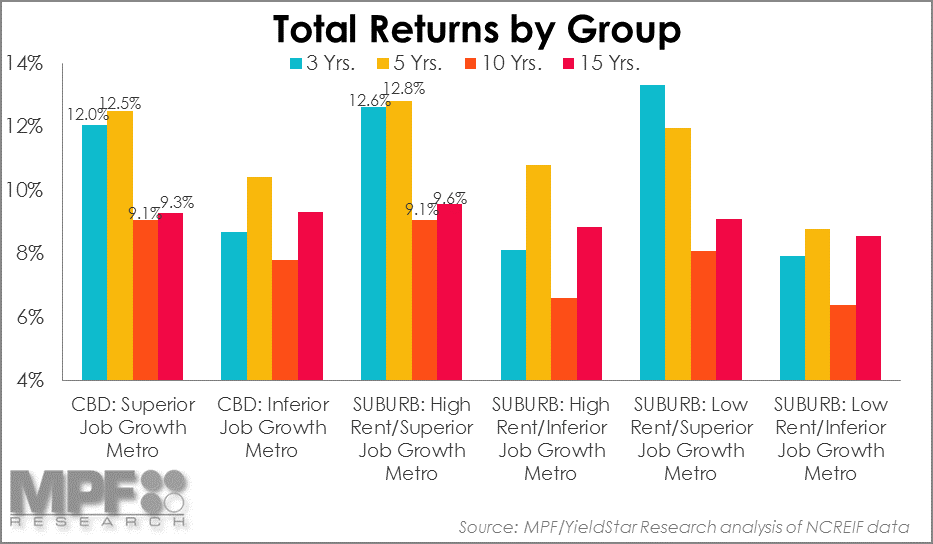 Private real estate is a notoriously opaque asset class. In order to circumvent the relative transparency deficiency, privately owned institutional real estate returns are typically benchmarked to the NCREIF index to gauge manager and asset performance. It’s important to measure not only the total return, but also the relative risk associated with that return. We measured the risk-adjusted return using the Sharpe ratio. We found that “good suburbs” consistently produced the highest risk-adjusted returns in every time period observed (three, five, 10 and 15 years). In other words, assets located in the high-rent, superior job growth suburbs produced comparable returns to assets in “good CBDs,” but with less risk. 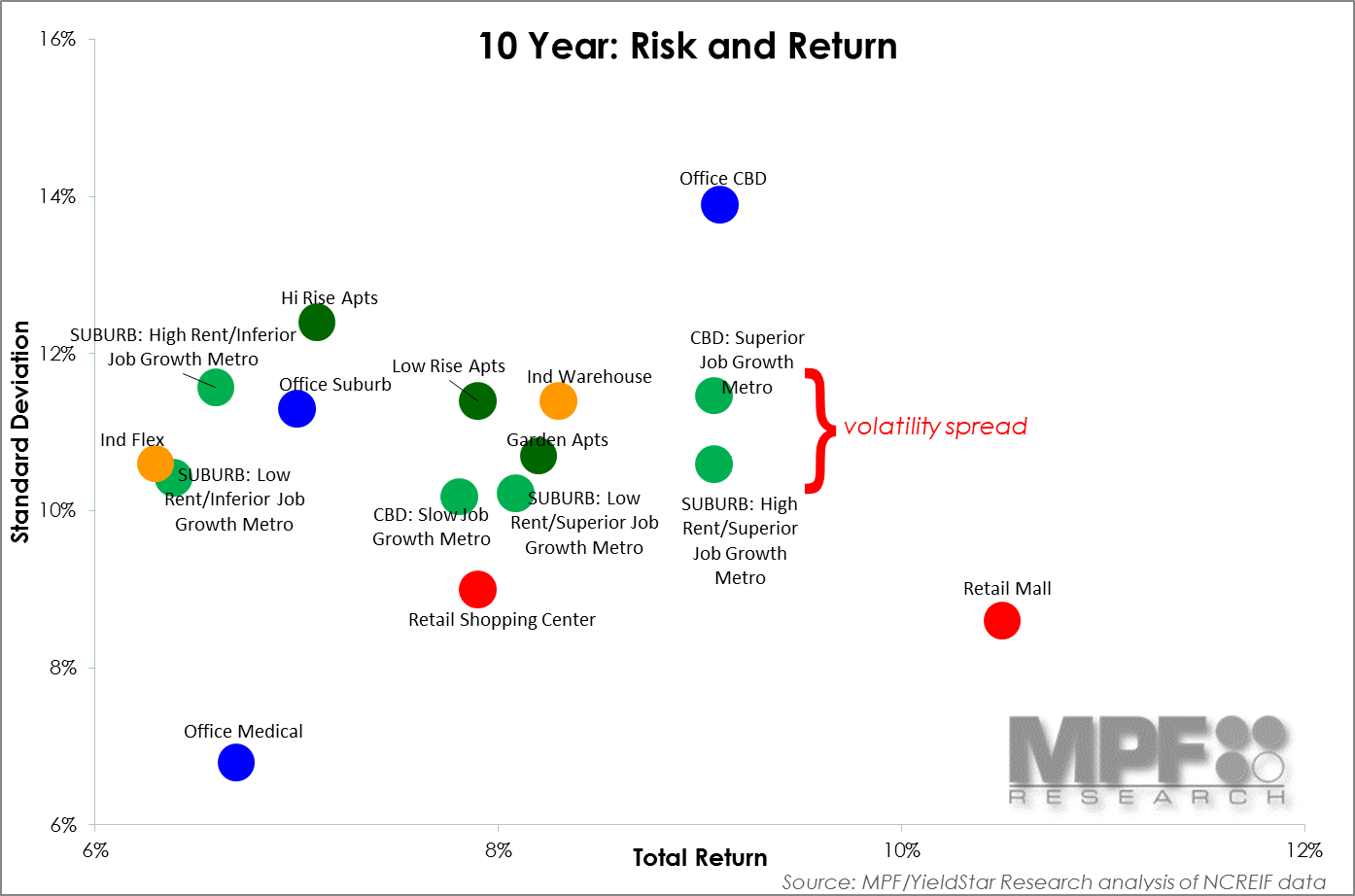 Capital appreciation is one of two components to core real estate returns and is measured by changes in market value from one period to the next. Appreciation returns (which are based on appraised values in the NCREIF data) typically incur more systematic risk and are heavily influenced by cap rate movement and market timing. In recent years, the share of total return driven by appreciation has grown materially, reflecting strong investor appetite for apartments. The other component of total returns is derived by measuring changes in income. Income provides stability during periods of macroeconomic stress, with remarkably little volatility. Investors are increasingly focused on using tools like revenue management and benchmarking to enhance income returns. Active management has larger degree of control over income returns and, in the multifamily industry, has the opportunity to differentiate themselves through revenue optimization. Maximizing income becomes an extremely important factor, particularly in markets where employment growth is lackluster or demand is lagging supply. 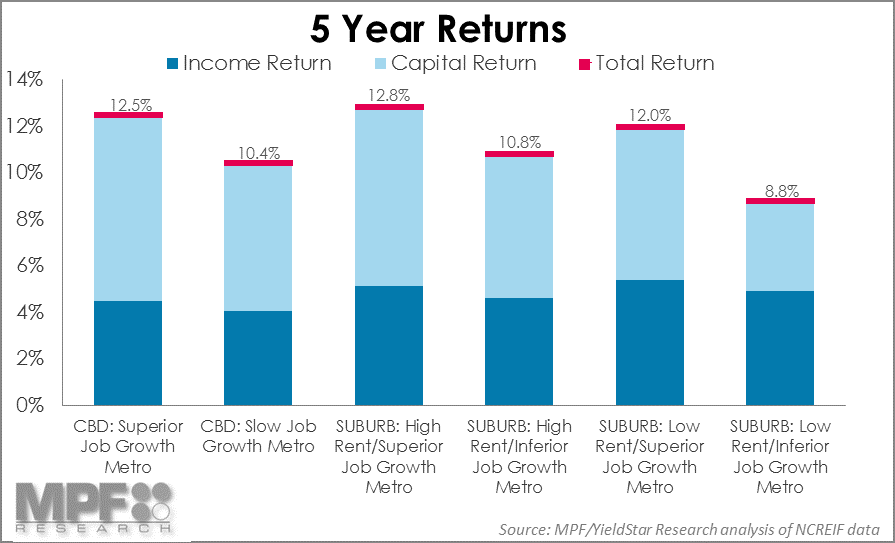 Before getting into investment implications moving forward, let’s take a brief detour to visualize the returns data in a more statistical way using a boxplot. The quarterly return results were broken down into quartiles. Notice, the wider the quartile, the higher the level of dispersion of quarterly returns. Group 6, for example, “Low rent/Inferior job growth,” had the highest level of central tendency during the past decade. However, this group also had the lowest quarterly returns, around 2%. Interestingly, all groups in the 10-year view reported mean quarterly returns below the median, indicating negative skewness. Said another way, there was a high recurrence of extreme quarterly readings below the median, which dragged the mean return into the second quartile. All of those negative readings came in 2008-2009 when appreciation returns declined into the red. However, the highest returns were realized, not surprisingly, during the 2010-2011 rebound. Overall, assets in the “good suburbs” produced the highest quarterly returns over the last 10 years. 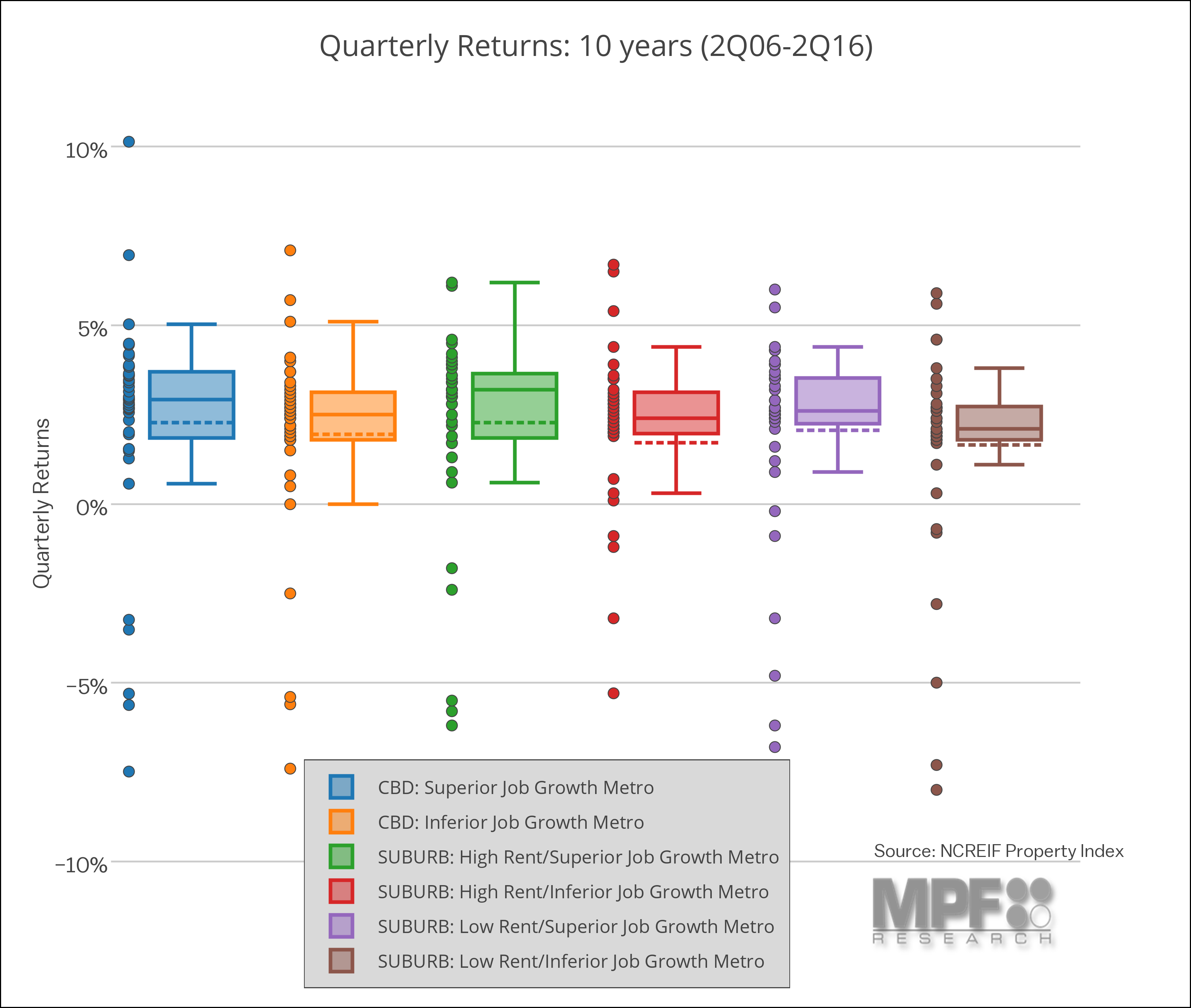 The five-year view tells an even more optimistic story, given that it excludes the Great Recession. As expected, the band of returns has a much tighter dispersion throughout the expansion years. Furthermore, the relationship between the mean and median are reversed when compared to the 10-year view. In the years following the recession, a high recurrence of extreme positive quarterly returns lifted the mean into the third quartile for all groups except one. The one exception was in the “good CBDs” cohort, which generated the second-highest returns but had a hint of negative skewness. Still, income returns again favored assets in the “good suburbs.” 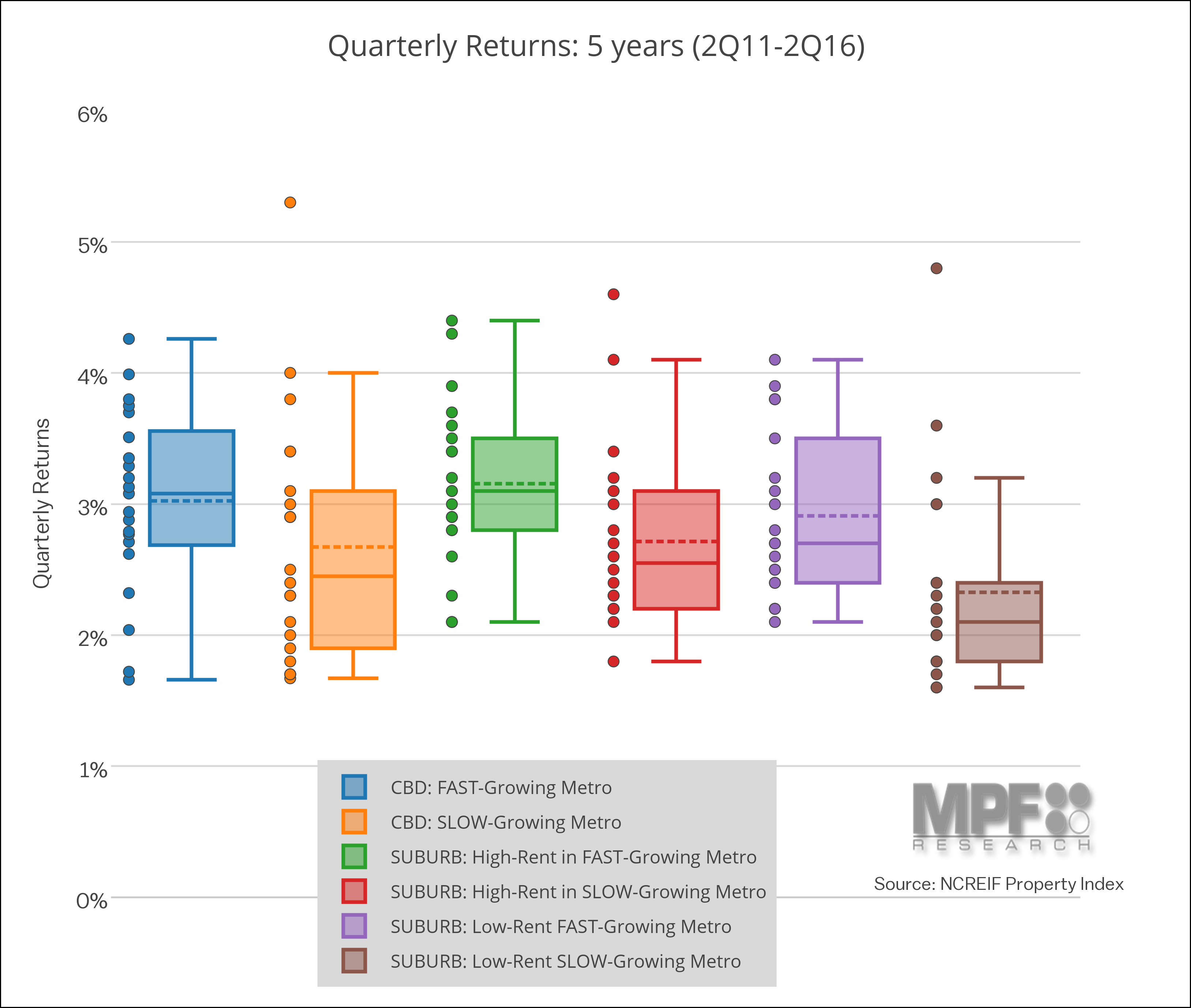 When we combined all suburban areas and all urban core areas irrespective of job growth and rent performance, a clear trend emerges in favor of the suburbs. Income returns for combined suburban groups increased by about 5.8% annually during the past five years, while increasing 5.1% in the urban core areas. Meanwhile, appreciation returns between the groups were virtually tied. Combined, the CBD groups generated total returns of 12.4% annually, while the suburban group came out ahead with 13.0%.

This may be less surprising, as cyclicality has contributed to recent suburban outperformance due to high supply in urban areas over the last five years. But it’d be unfair to credit cyclicality for the consistent outperformance of the “good suburb” group, which emerges from this research study as a market inefficiency – a rare segment where investors are likely understating value and overstating risk. 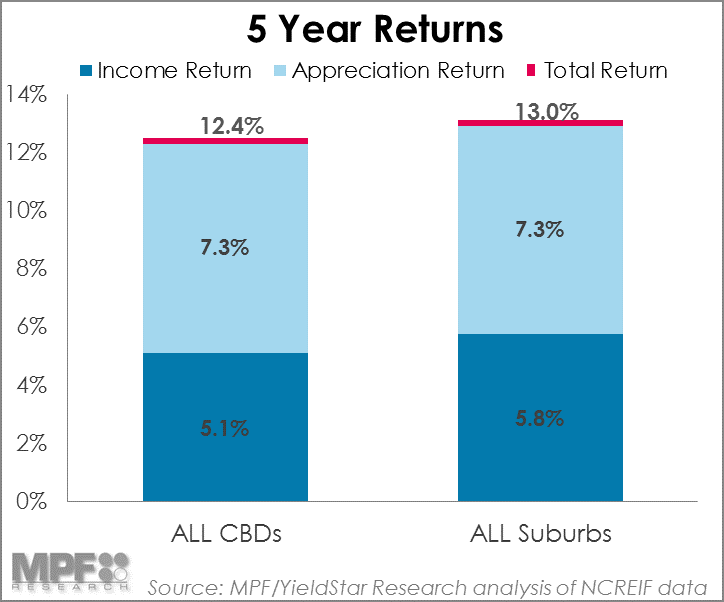 Up to this point the results have been gleaned from return data within NCREIF. But returns only impact an investor when real estate changes hands. While that’s still valuable information, the results don’t necessarily speak to the underlying day-to-day operations. The analysis would be incomplete without a thorough scrubbing of the apartment fundamentals data.

Rent growth in the “good suburbs” group, again, came out on top. Over the last 10 years, annual rent change in the nation’s top 50 apartment markets has averaged about 2.5%. However, the three groups with superior workforce expansion posted average same-store rent growth of 2.8% to 3.0% annually. Meanwhile, the areas with slower employment gains saw rents increase only about 2.0% to 2.2%. Furthermore, rent growth performance in the “good suburbs” (3.0%) outpaced that of the “good CBDs” (2.8%). Moreover, rent growth among the fast-growing CBDs saw the greatest volatility. That trend is especially visible from 2009 to 2011, when trough-to-peak rents changed more than 14 percentage points. Over the next five years, rent growth in the “good suburbs” is expected to continue to outshine all other groups, and by a healthy margin, due to favorable supply/demand trends. 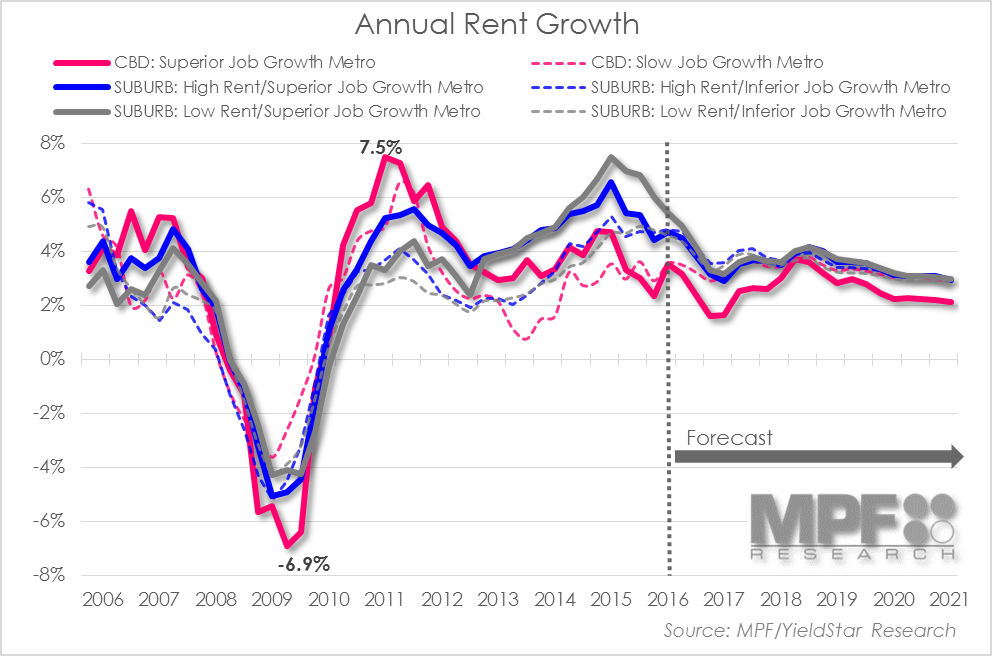 New supply, particularly in the urban core, has been substantial during this part of the cycle. Nearly 470,000 are currently underway in the nation’s top 50 markets. One-third of those units will be delivered to the priciest and highest density areas – the urban core submarkets. Furthermore, new supply is set to peak in the 3rd quarter 2017, bringing the annual delivery volume to roughly 365,000 units. Proportionally, that will expand the existing unit base by roughly 2.8%. That’s a big number by historical standards, but the real story is in the details. For some perspective, annual inventory growth for the top 50 markets has averaged about 1.0% since 1996, and was 1.6% most recently. CBDs in strong-growth markets are set to be saturated with new supply, with an inventory expansion rate of 9.3% (61,000 units) at its peak in 3rd quarter 2017. New supply will concurrently peak in every other group as well, but nowhere near those levels. MPF/YieldStar Research expects rent growth to soften, going into 2017, under the weight of supply. Demand should remain strong, but it’s unlikely to accelerate to meet record supply levels in many of these CBDs. Still, barring an economic downturn, fundamentals could rebound by the second half of 2018 if supply indeed slows down. 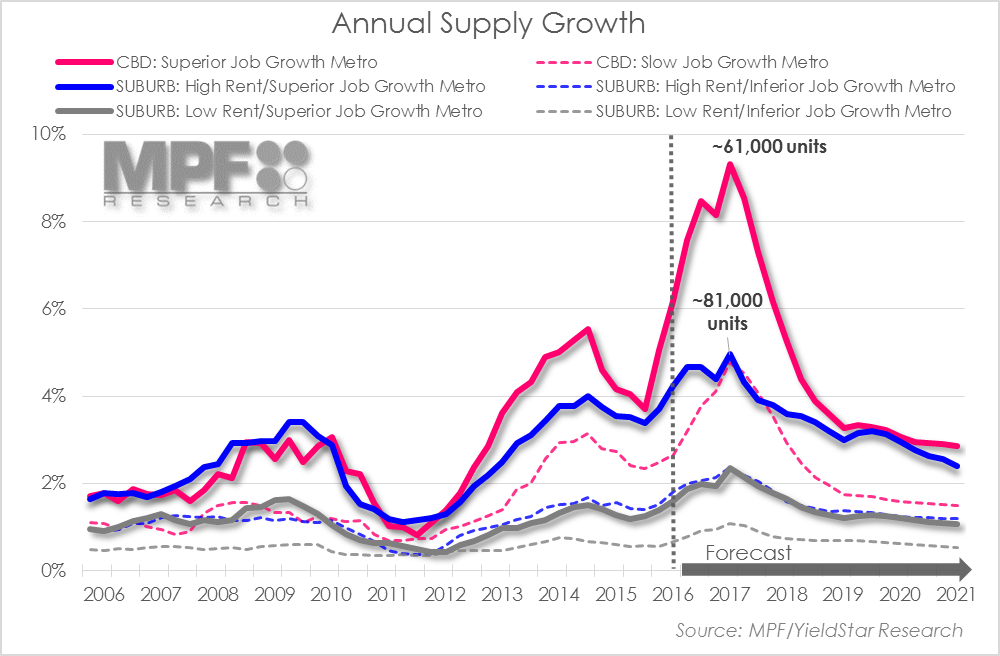 These results debunk a common misconception, which is that a CBD-centric strategy will produce the highest returns relative to risk. This misconception is, in part, fueled by other misconceptions. For instance, recent supply trends disprove the theory that CBDs offer a high barrier to entry. In fact, “good suburbs” have proven to be the most challenging for developers. Most attractive suburbs have restrictive zoning and public resistance to multifamily housing, whereas most cities have incentivized downtown redevelopment in recent years. Additionally, many investors could be overestimating the impact of single-family housing in the “good suburbs” and underestimating the impact of lower retention rates in the urban core.

To be clear, the research results do not support a suburban sprawl development strategy – or a mass suburban acquisition strategy. Rather, the data clearly points to high-barrier suburbs – areas where development is limited to infill opportunities, areas with proximity to high-paying jobs, plentiful amenities (retail, dining, etc.) and scarce single-family alternatives.

The study may not dissuade urban proponents, who will note that transaction-based appreciation likely exceeds appraisal-based appreciation in many CBDs. That is a fair point, but nonetheless, it’s evident that fundamentals (income, rents, supply) are not the driver of appreciation; investors’ perception of risk is. That has driven development and acquisition strategies in this cycle. To that point, NCREIF’s apartment index has seen a material shift in composition over the last decade. Ten years ago, mid-rises and high-rises (which tend to be more concentrated in urban areas) comprised only 25% of the NCREIF apartment index based on value. Today, it’s 60%.

Investors should watch carefully the balance between fundamentals and pricing in urban spots, particularly over the next few years. And don’t discount the right suburbs. The desirability for suburban product, especially in areas with burgeoning employment growth or scarce single-family alternatives, can generate high returns both on the income side and the appreciation side.