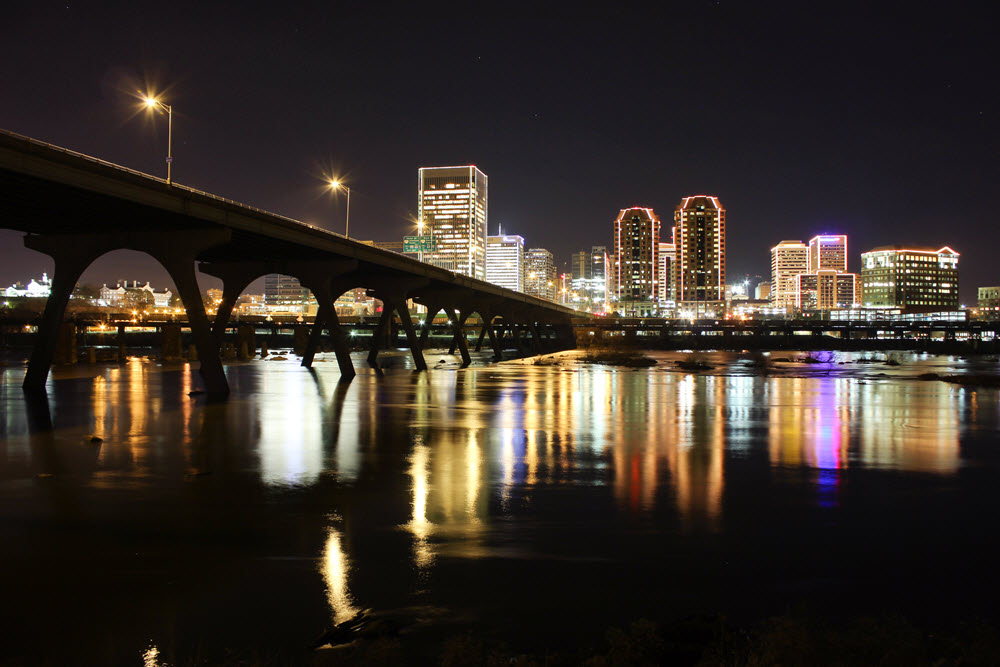 To say that the Richmond apartment market performance has made a comeback in the past year would be an understatement. An exceptional rise in job gains and job growth, combined with a limited amount of new supply has lifted Virgina’s capital into the top 5 for effective rent growth among major markets the past few months.

Richmond apartments’ annual effective rent growth was 4.5% in September, some 222 bps above the 2.3% recorded one year earlier, according to apartment market surveys from Axiometrics, a RealPage company. The occupancy rate also has spiked, reaching 95.9% last month, up from 95.1% in September 2016 and 94.7% in September 2015. 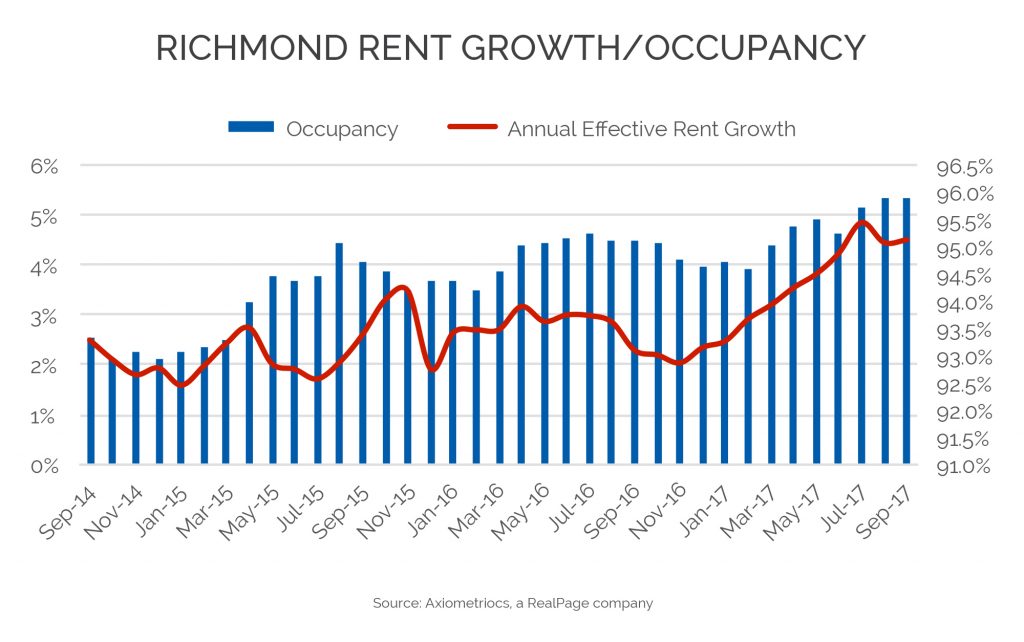 The reason for the rapid rise in Richmond’s apartment market performance is simple: Demand has surged while very little new supply has entered the equation. Richmond employers added 16,200 jobs in the 12 months ending August 2017 (the latest local data available) and 26,900 jobs in the two years ending August. Those new jobs translated to 2.4% annual job growth in August, far above the 1.4% recorded in the nation and the 1.5% reported in the commonwealth. 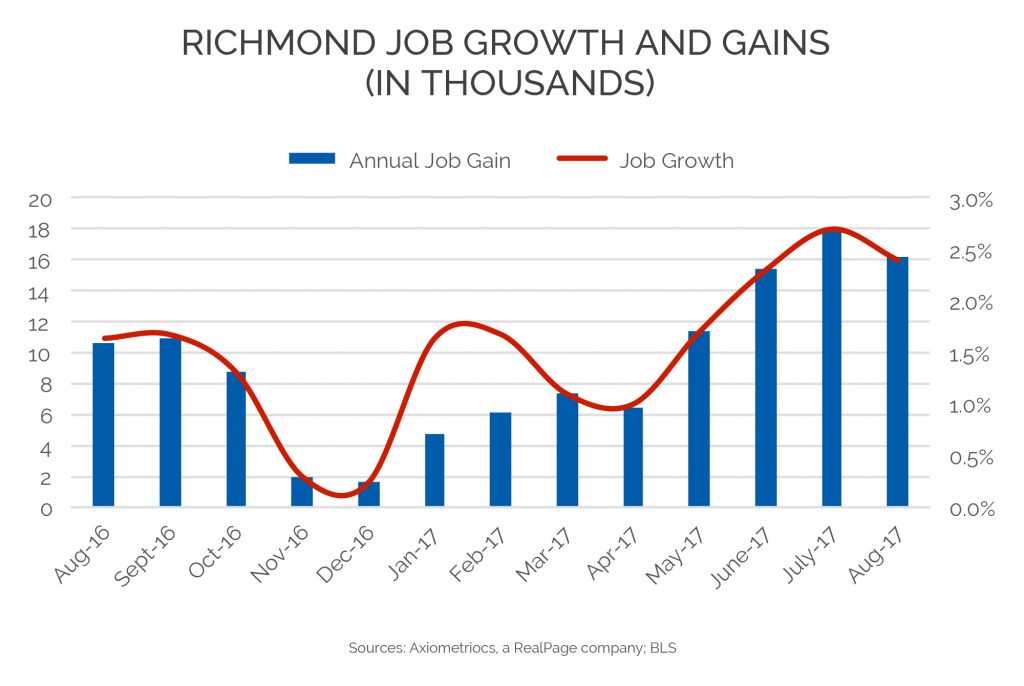 While Trade, Transportation and Utilities has the most jobs in the area – thanks largely to the headquarters of Dominion Energy, a large electricity provider in Virginia, the Construction sector had 5.9% more jobs in August 2017 than in August 2016.

Many of those construction jobs have likely been created because of the impending development of the Atlantic Coast Pipeline, a 600-mile transport of natural gas between West Virginia and southern North Carolina. Its path runs through the center of Virginia. Dominion Energy is a part of the joint venture that will build the project, with construction starting within the next couple of months.

Also starting construction is a new 29,000-square-foot building at the American Civil War Museum, which will feature a new main exhibit hall and a preservation center.

So all the new construction workers require living quarters, but the Richmond apartment market’s supply chain is small, Just 1,401 new units are scheduled for 2017 delivery in Richmond, down from the cyclical peak of 1,734 delivered last year, according to apartment market surveys. Construction is slated to ramp up a bit in 2018, where 1,604 units have been identified. 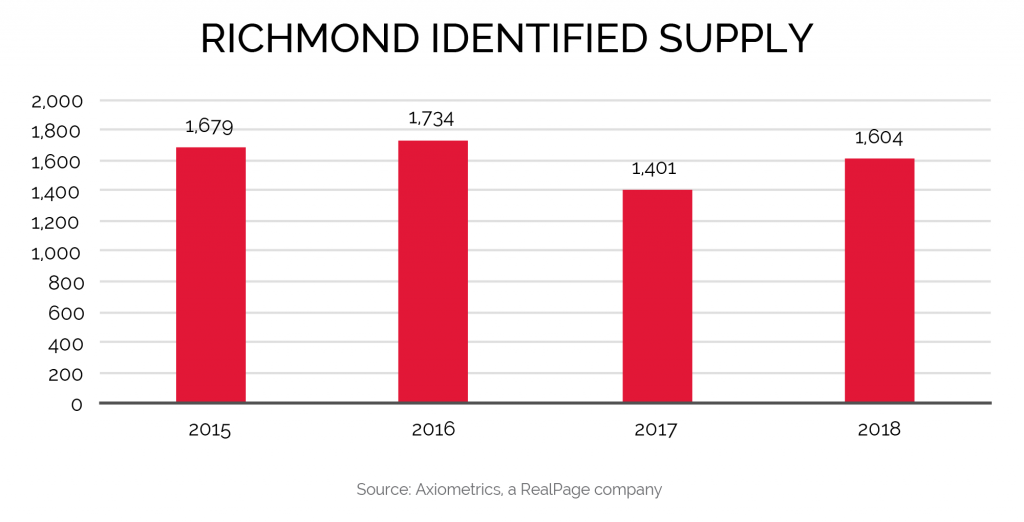 While apartment construction is slow, the market for single-family housing seems to be 9.8% the year before that.

If Richmond’s job growth continues as it has, the demand for Richmond apartments will likely cause more units to be built in the next couple of years. And effective rent growth and the occupancy rate would remain high.