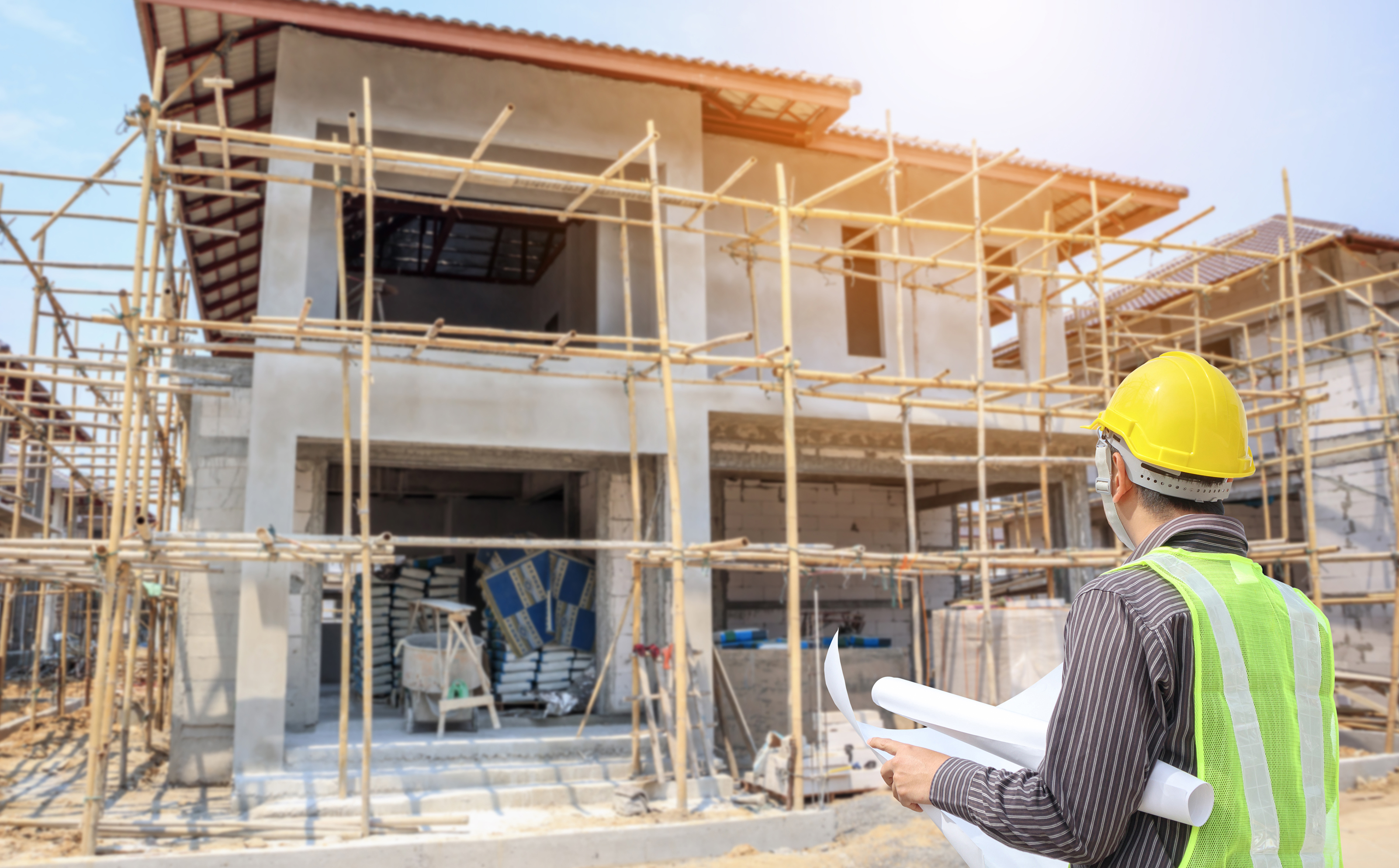 Building permits for both multifamily and single-family construction stalled or declined slightly on an annualized basis from March to April as housing markets perhaps anticipate slowing sales with rising inflation and mortgage rates.

Compared to one year ago, the annual pace of multifamily permitting is up 16.3% while single-family annualized permitting is down 3.6%. 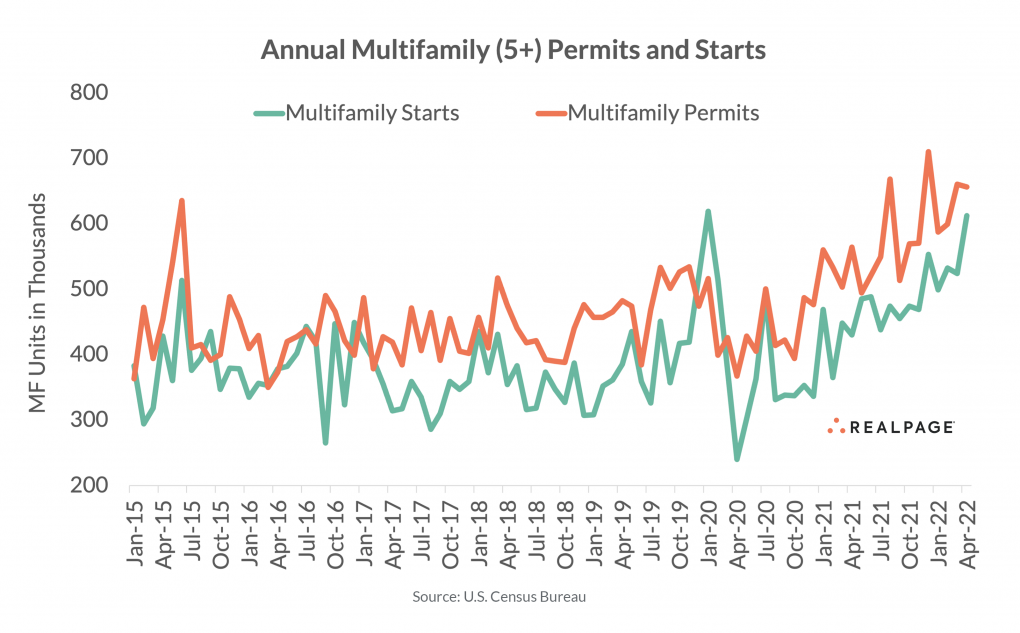 Both annualized multifamily building permits and starts have been trending upward since 2021, after a relatively flat trajectory historically. Annualized multifamily permitting averaged about 440,000 units between 2015 and the end of 2020, but has averaged 580,000 units annually since 2021. Along with increased household formation in recent years, the single-family market has had difficulty keeping up with supply as all associated housing development costs have been rising and multiple other factors have hampered home builders from meeting demand. Multifamily has been filling the housing gap.

At the metro level, all of the top 10 permitting markets returned to the April list from March, and only two changed places. New York is still the leader in multifamily permitting with 38,366 units, more than 3,700 units greater than last year. The potential expiration of the 421a tax incentive in New York may cause a spike in multifamily permitting in the next few months as a similar scenario occurred recently in Philadelphia.

Austin remained at the #2 spot in April with 23,711 units permitted, followed by Philadelphia in the #3 spot with a total of 22,204 units. Dallas returned in the #4 spot with 19,792 units permitted, about the same as last month’s annual figure. 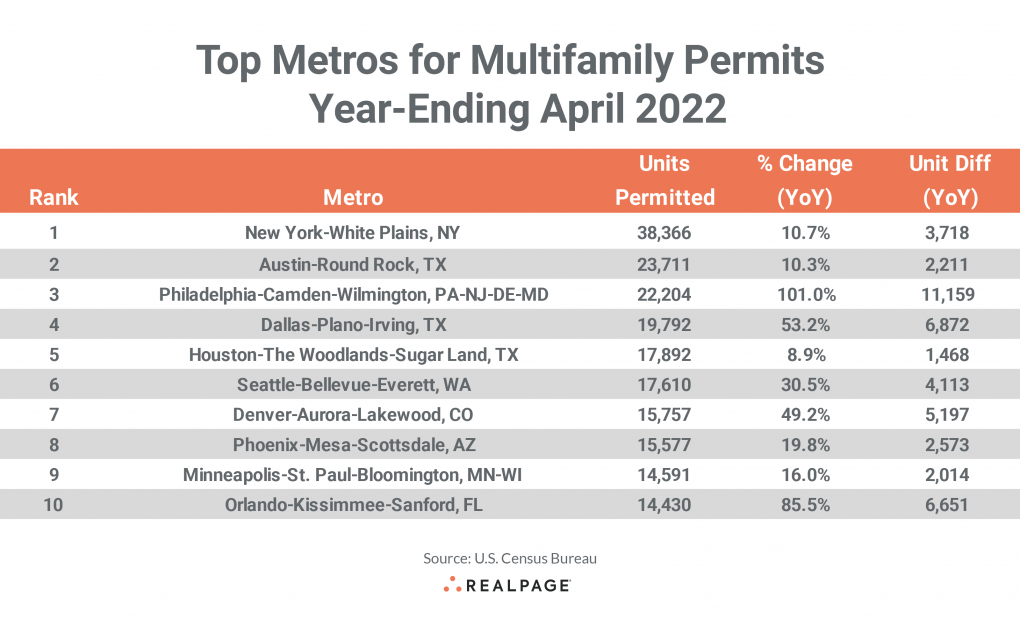 Houston also retained its spot from March at #5 with 17,892 units permitted for the year, about 1,500 units more than last year but about 800 less than last month. Seattle and Denver switched places on the list at #6 and #7, with 17,610 and 15,757 units, respectively. Both were up significantly from last year but Denver permitted about 1,400 fewer units than last month’s annual total.

Phoenix remained at #8 with 15,577 multifamily units permitted, almost 2,600 more than last year but about 230 less than last month.

Last month’s #9 and #10 (Minneapolis-St. Paul and Orlando) returned in order with about 14,500 units permitted each but Orlando saw a surge in permitting compared to its annual total one year ago with a gain of 6,651 units. Minneapolis permitted about 2,000 more units than last year and both markets improved about 900 units from March’s total.

Only four of the top 10 markets had more annual multifamily permits than the previous month, with the aforementioned Minneapolis and Orlando’s monthly gain of about 900 units from March’s annual totals leading the pack. Austin had a 2.8% increase from last month or 655 units, while Seattle increased 2.3% from March, adding 417 units to annual permitting.

New York permitting was virtually unchanged from the March total, while Denver permitted 1,442 fewer units for the year than last month. The remaining top 10 markets slipped between 36 units (Dallas) to 794 units (Houston) from their previous annual totals.

Below the metro level, all of last month’s top 10 permit-issuing places returned to this month’s list with the first three remaining in the same order. The list of top individual permitting places (cities, towns, boroughs, and unincorporated counties) generally include the principal city of some of the most active metro areas.

The city of Philadelphia remained at the top of the list in April with an annual total of 18,731 units as the city’s tax abatement policy change caused a flood of permitting late in 2021. 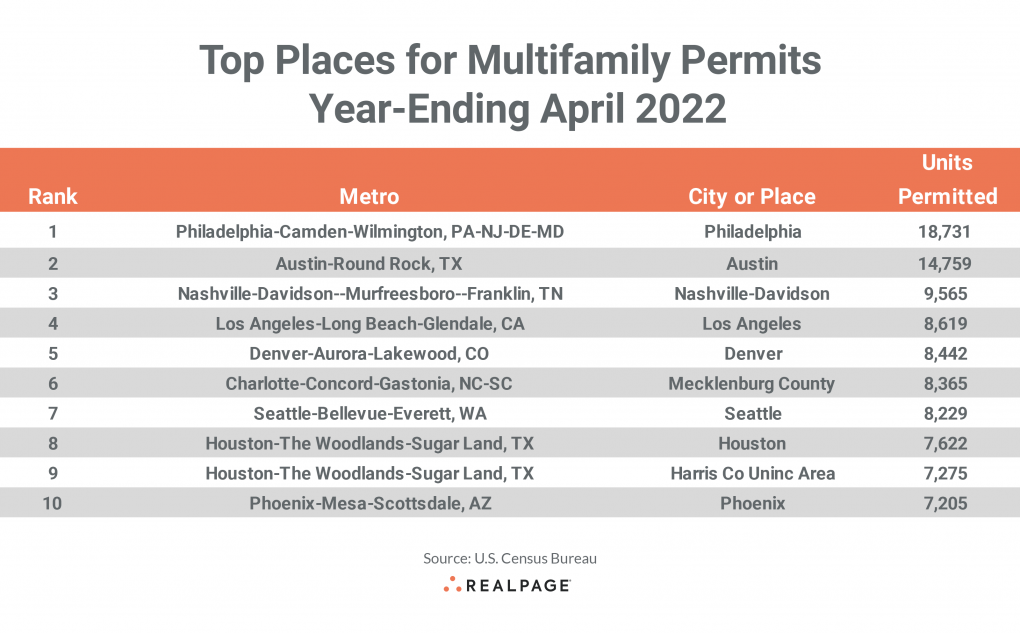 Mecklenburg County (Charlotte) moved up two spots to #6 in April with 8,365 units permitted, an increase of 230 units from March. The city of Seattle remained at #7 this month, permitting 8,229 units for the year-ending April but the city’s annual total fell by more than 500 units.

The city of Houston slipped two spots to #8 with 7,662 units permitted, almost 1,400 units less than the previous total. Unincorporated Harris County (Houston) moved into the #9 spot with 7,275 units permitted and the city of Phoenix settled into the #10 spot, permitting 7,205 units for the year.