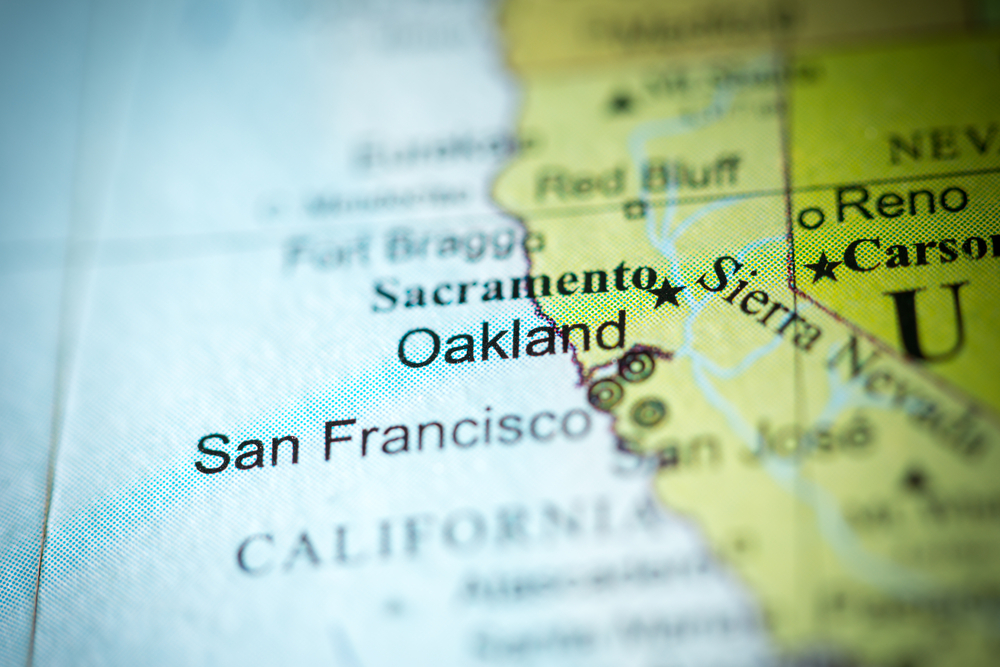 The Bay Area has been a consistent leader in revenue growth over much of the current development cycle. But when rents in the region fell recently, it prompted widespread skepticism about the durability of the market. However, the recent pullback seems more like an overreaction from apartment operators than a structural shift in the market. Operators have been able to push rents so hard for so long that, as the economy has normalized as anticipated, they slammed on the brakes. The structural underpinnings of the Bay Area remain healthy and intact.

Rent growth was exceptional from 2011 through 2015, so the reported cuts in 2016 seemed like a sudden shift in momentum. However, lease-transaction data provides a different view. Data from actual, executed leases show the rapid slowdown is generally limited to asking rents for new leases. For renewal leases, rent change has moderated from 2015 levels, but landed at 4.8% in 4th quarter 2016. Though that’s down from the recent peak of 8.6%, it’s still solid rent growth. Examining renewed leases across the Bay Area metros of San Francisco, Oakland and San Jose, rent growth has cooled moderately but still remains generally healthy at between 4% and 7% in each. Additionally, operators have been successful in retaining existing tenants, with roughly of half expiring leases renewed in 2016. 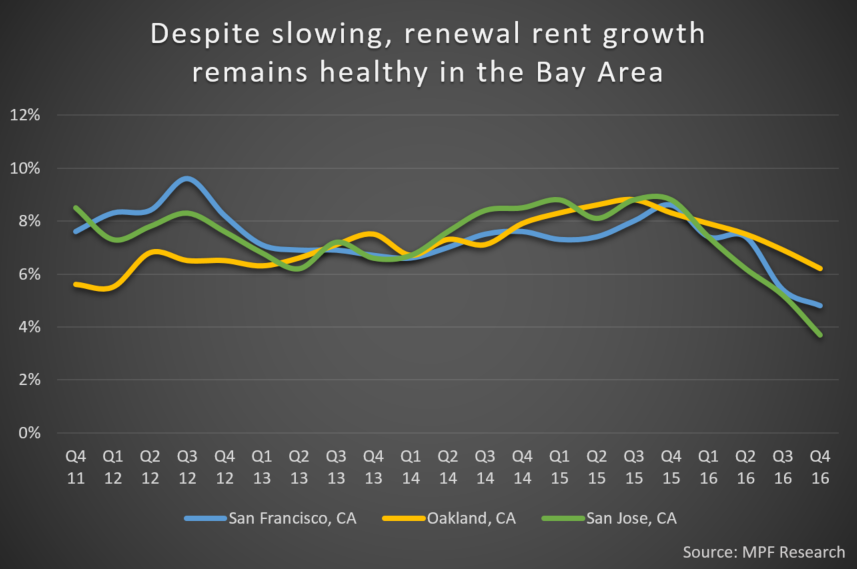 While renewal pricing remains firmly in positive territory, asking prices for new leases have dropped over the past year. In fact, asking prices for new leases have declined on annual basis in 2016’s 3rd and 4th quarters in both San Francisco and San Jose. Operators in Oakland have also pulled back on increases in recent quarters. As a result, asking rent change went negative in the Bay Area as a whole in 2016. That’s a marked difference from 2011 through 2015, when asking rent growth averaged more than 8%, peaking at 12.4% in 4th quarter 2011.

The dramatic pullback in asking rents coming at a time when renewal lease pricing remains firmly in positive territory suggests operators are less confident in their pricing power as they were earlier in the cycle. But is the erosion of confidence due to perception or market forces? Across the Bay Area, underlying market fundamentals appear strong. But there are two key differences between the high rent growth period of 2011 through 2015 and the current environment: job growth levels have moderated and apartment construction activity has increased. 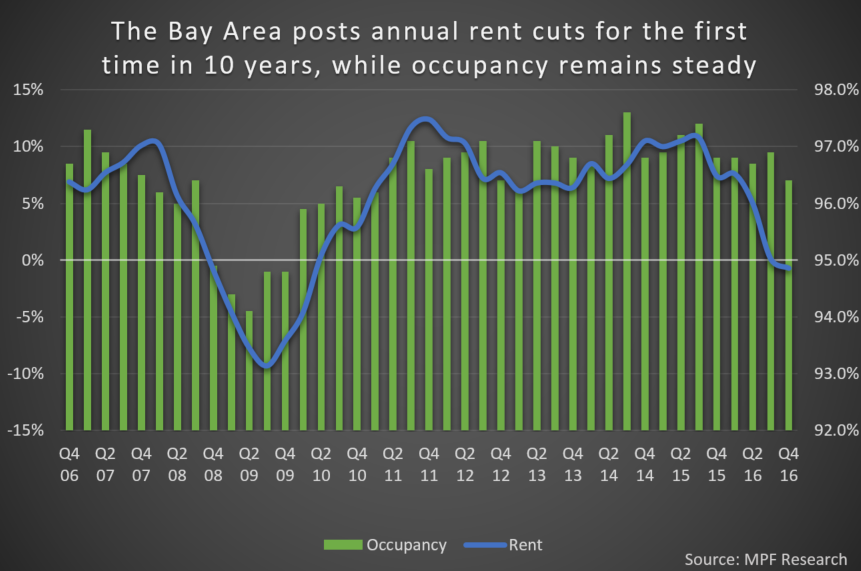 Over the last cycle, the Bay Area has experienced some of the healthiest job growth in the nation, with the employment base growing at annual average 3.7% from 2012 through 2015. That growth rate translates into an average of 111,100 new jobs annually. Over the last half of 2016, annual job growth remained above 90,000, translating into growth rate of 2.8% – well above the national average of 1.8% Likewise, employment growth has remained at 2.5% or higher in each of the Bay Area metros. 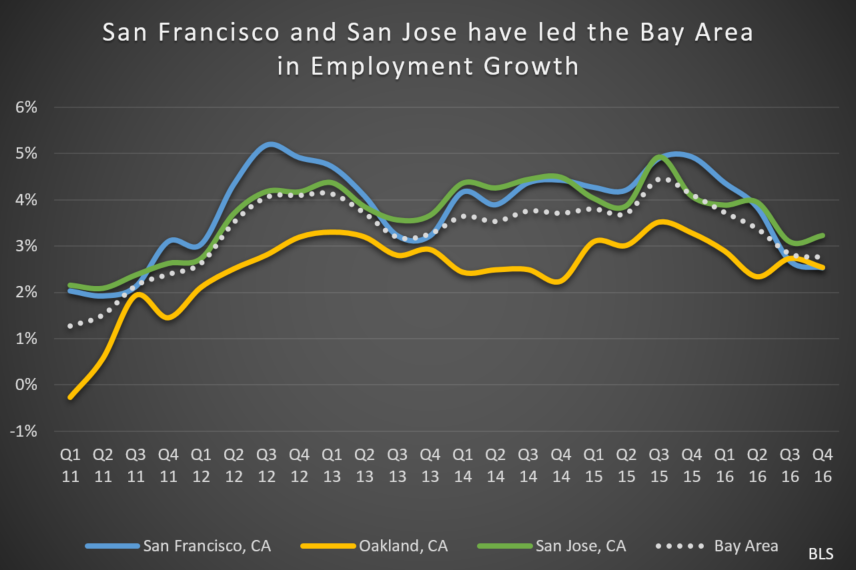 Strong investment in the technology sector fueled job growth during this period, from San Francisco down to San Jose. Private capital flowing in the tech space has tapered slightly over the last year, but the sector remains on solid footing. 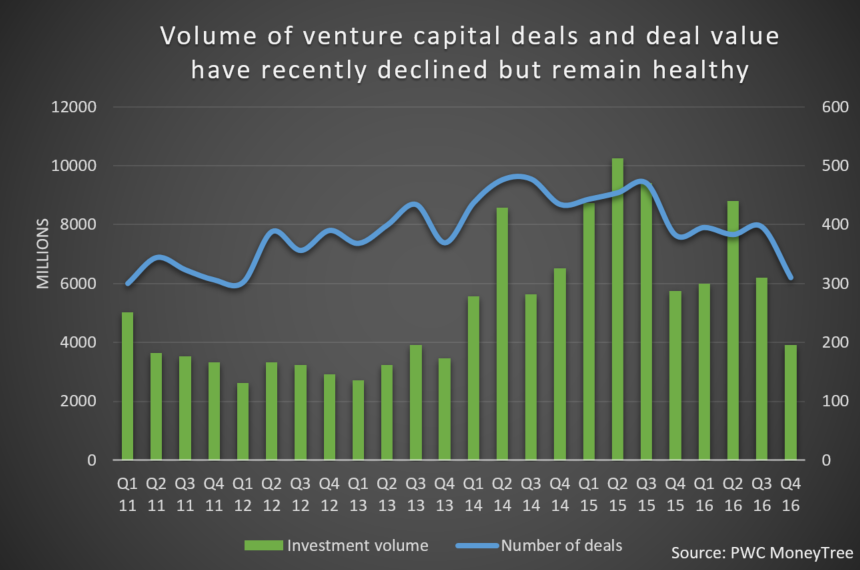 The Bay Area’s historic rent run lured increased development activity in the region. A total of 6,526 units completed in the Bay Area in the last half of 2016, pushing the 2016 total to 11,261 units. That completion volume was the largest since MPF Research began tracking the market, double the 15-year average of roughly 5,250 units. But it only grew the inventory base 1.9%, a manageable amount, especially in an undersupplied area. Additionally, occupancy has remained strong at above 96%.

Even though development activity is highly concentrated geographically, the effects on asking rent growth have been widespread. Three of San Francisco’s seven submarkets saw asking rents fall in 2016. In San Jose, rents declined in seven of nine submarkets.

Furthermore, rent cuts have not been isolated to Class A product, the segment most vulnerable to new supply. Cuts have trickled down into Class B product, a segment that is still performing very well nationally. 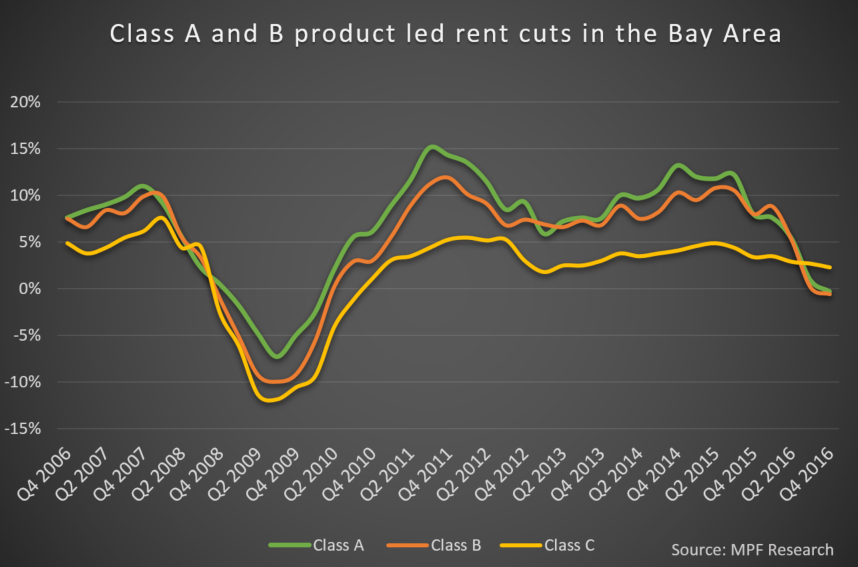 Even with job growth and tech investment moderating and new supply increasing, the Bay Area remains fundamentally strong. As of November 2016, unemployment rates remained well below the national rate of 4.7% in all three metros: 4.0% in Oakland, 3.5% in San Jose and 3.0% in San Francisco.

Strong economic opportunities have grown the region’s population. More specifically, in the 20-to-34-year-old age niche (a prime renting segment), all three Bay Area metros has experienced substantial population growth. As an epicenter for business, technology and culture, the Bay Area should remain a magnet for prime-renting age young adults. 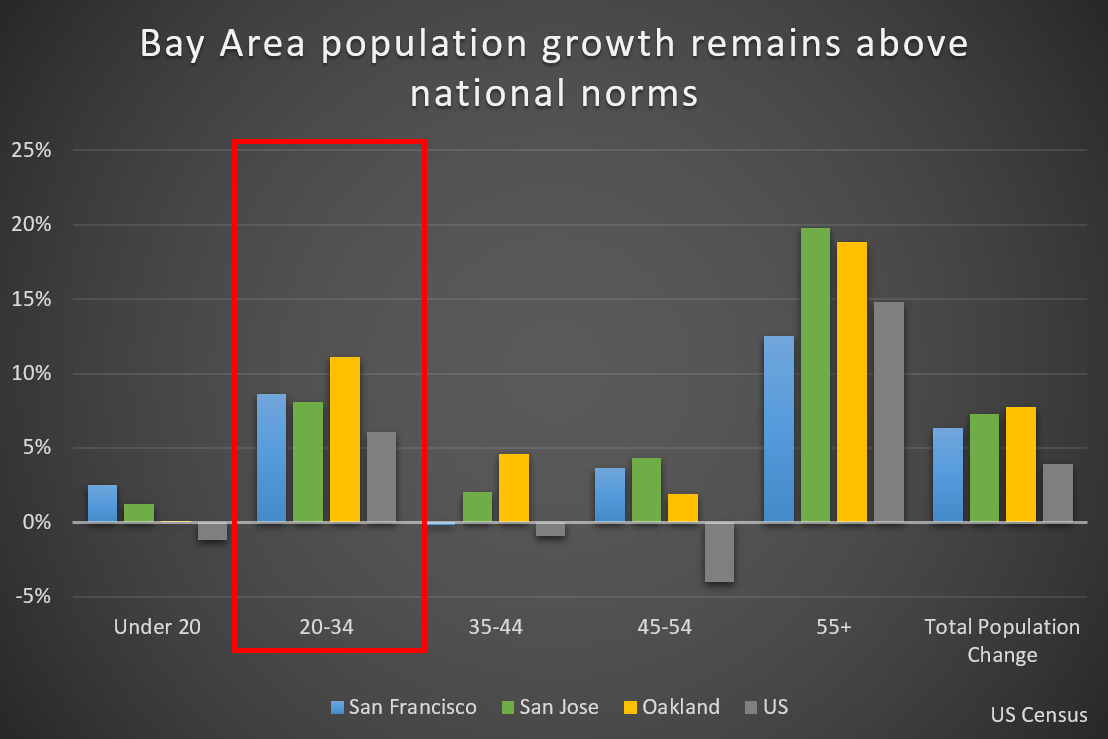 While we depend on economic data to shape our forecasts, erratic performances from quarter to quarter can be reflective of sentiment in the market. Owners and operators can be more sensitive in pricing new leases if there’s just a hint of a slowdown—that’s especially the case in the Bay Area.

Over the last cycle, annual rent growth has entered record territory in the Bay Area, making national headlines. Given strong structural drivers, apartment operators have been aggressively pricing product with rent growth averaging above 8% between 2011 and 2015, with a peak of 12.4% in 4th quarter 2011. These annual rent growth numbers eclipse the 10-year average of roughly 5%. What’s more, with prohibitive zoning regulations, new development is difficult to get off the ground and a limited number of apartment units enter the market. This, in combination with an incredibly high entry barrier to the for-sale market, means occupancy for rental-housing levels remains tight. Looking ahead, occupancy should remain tight as overall demand drivers remain strong. However, in terms of annual rent growth, double-digit growth is widely regarded as unsustainable over time.

That said, we do not expect the current cuts to be a new norm. Annual rent growth should return – especially in product classes and submarkets isolated from new supply – as economic and demographic fundamentals remain generally healthy. However, rent increases are unlikely to be as aggressive as we have seen in the Bay Area’s historic run early in this cycle.