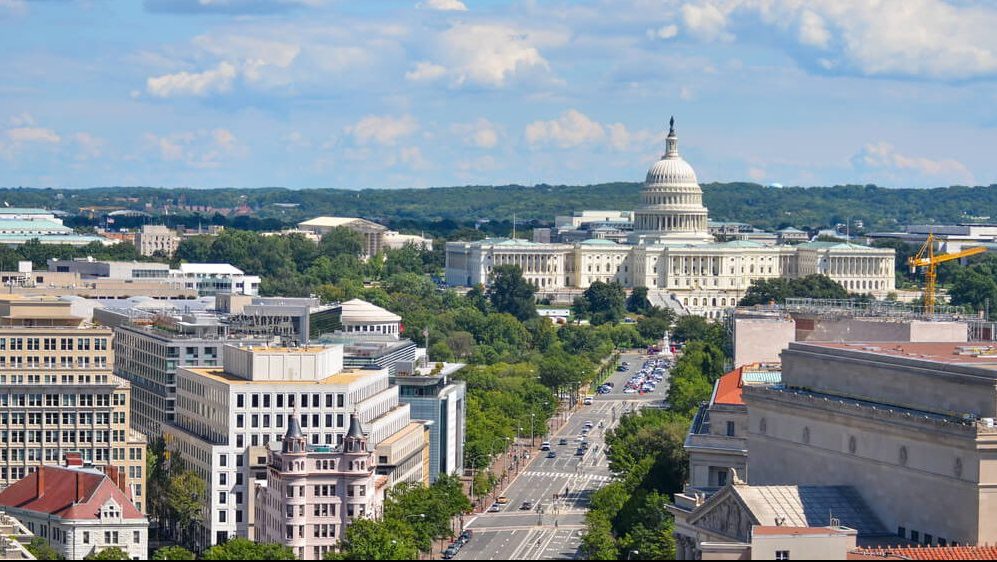 Like many areas across the nation, apartment markets in the Mid-Atlantic region of the country are registering solid occupancy and rent growth rates.

While the expensive Washington, DC market is the performance laggard in this region, nearby Virginia Beach offers lifestyle options and affordability that are clearly creating an advantage and drawing renters in. 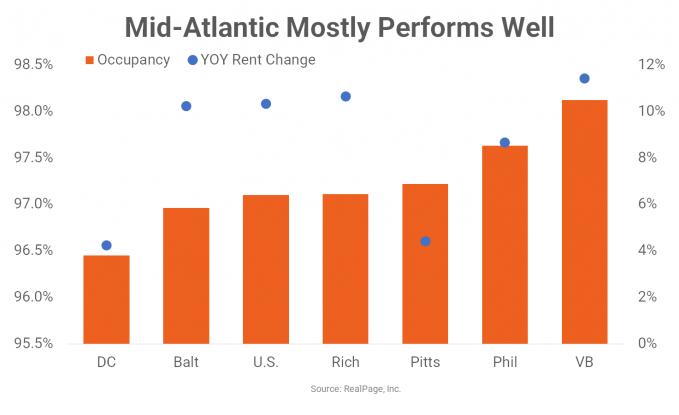 Washington, DC has been the weakest performer among the major Mid-Atlantic markets in recent months. Effective asking prices climbed 4.2% in the year-ending August. While well above historical norms for this market, that performance is still the worst in the region and is, in fact, one of the softest showings nationwide. Like many gateway markets, rent positioning in Washington, DC took a big hit when the first wave of COVID-19 swept through the U.S., with operators turning to steep annual price declines that bottomed out at 6% in March 2021. Washington, DC is the most expensive apartment market in this region, with rental rates of $1,877 as of August.

The nation’s capital was also the Mid-Atlantic’s worst occupancy performer in August, with a rate of 96.5%. As with rent change, occupancy in Washington, DC is now performing ahead of historical averages and now, in fact, matches the multi-decade high this market reached in August 2019. However, the latest showing pales in comparison to the performances in the rest of the region, and in relation to the national average of 97.1%. Keeping occupancy in Washington, DC from taking off like other metros has been competition from new supply. This has steadily been a big construction market, logging deliveries for over 112,000 units in the past 10 years. Only Houston and Dallas saw more completions during that time frame.

Baltimore is performing a little better. Located just 40 miles northeast of Washington, DC, Baltimore is more of a traditionally slow growth market, which tends to do well in economic uncertainty. This is also the only major mid-Atlantic market to see solid employment base recovery. Baltimore has regained nearly all the jobs lost during the 2020 downturn and is now just 2.8% behind its pre-pandemic employment base. In comparison, the U.S. overall is 4.1% below pre-pandemic norms.

Effective asking rents were up 10.2% in Baltimore during the past year, which is more than four times this market’s five-year average. This market barely dipped its toes into price cuts during the pandemic and recovered rent growth quickly before surging in recent months. Prices in Baltimore apartments run about $340 below Washington, DC rates at $1,536 as of August. Occupancy in Baltimore has trended up in recent years, and currently sits at a multi-decade high at 97%.

Apartment demand in Philadelphia hit a record high in 2nd quarter, pushing occupancy to a two-decade peak of 97.6% as of August. Philadelphia didn’t take much of an occupancy hit during the first wave of the COVID-19 pandemic. The low point from the past year for this market was 96.4% logged in January 2021, which is still a few ticks ahead of Philadelphia’s five-year average. Occupancy is tightest in the market’s supply of Class C units, with a rate of 98.4%.

Annual rent growth also reached a recent high at 8.7% in August, which was well ahead of this market’s typical performance, but still a few ticks below the national average. Price increases were highest at 10.3% in the luxury Class A stock. In the past 10 years, new supply additions have been steady but reserved, increasing the existing base by 12.5%, well behind the national norm. Rental rates in Philadelphia averaged at $1,557 in August, much more affordable than the rates in nearby New York.

Pittsburgh occupancy made quite a comeback recently, after lagging the national norm for much of the past year. At 97.2%, the August showing in Pittsburgh is at a multi-decade high. Occupancy has climbed a substantial 260 basis points (bps) in the past five months, after bottoming out at 94.6% in February and March.

Rent growth, however, has still not caught up to quickly rising occupancy rates in Pittsburgh. Asking prices were up 4.4% in the past year, which is well ahead of this market’s five-year average, but comes in at less than half the pace seen in the U.S. overall. Pittsburgh is the most affordable Mid-Atlantic market, with prices averaging at $1,257.

Like a lot of beach towns, Virginia Beach has seen notable growth during the past year, benefitting from the trend toward a more flexible at-home workforce during the COVID-19 pandemic. Demand more than doubled the limited volume of supply here in the past year, which has boosted apartment performance metrics. August occupancy reached 98.1% in August, an all-time high for the market and one of the best showings among the nation’s largest 50 apartment markets.

Annual rent growth in Virginia was also significant at 11.4% as of August. This was more than three times the market’s five-year average and the best showing in the Mid-Atlantic region. The luxury Class A product fueled much of this market’s price increases during the past year, with a rent surge of 18.1%.  This growth comes on top of relatively strong performance last year, as Virginia Beach did see rent cuts during the 2020 downturn. In fact, at its lowest point during the recession, annual rent growth was still north of 2%.

While not technically a major apartment market, Richmond is growing, focusing on development of the downtown area, and garnering more influence over the local apartment industry in recent years. The apartment base here has increased by 18.4% in the past decade, a growth pace that comes in second only to Washington, DC in the Mid-Atlantic region. Apartment demand in Richmond has kept up nicely with supply, resulting in solid occupancy of 97.1% in August.

Annual rent growth in Richmond is ranking a bit ahead of the U.S. norm at 10.7%. That’s the second-best performance in the Mid-Atlantic region and a big boost for the market, which typically sees price increases at about half that pace. Price increases are notably concentrated among Richmond’s luxury Class A stock, which saw prices hike 15.4% year-over-year. Averages rents in Richmond go for $1,313, which is just about $20 more than in neighboring Virginia Beach, but is well behind prices in Washington, DC, Richmond’s neighbor to the north.

For more information on apartment markets in the Mid-Atlantic, including forecasts and coverage for secondary and tertiary metros, watch the webcast Market Intelligence: Mid-Atlantic Region Update.