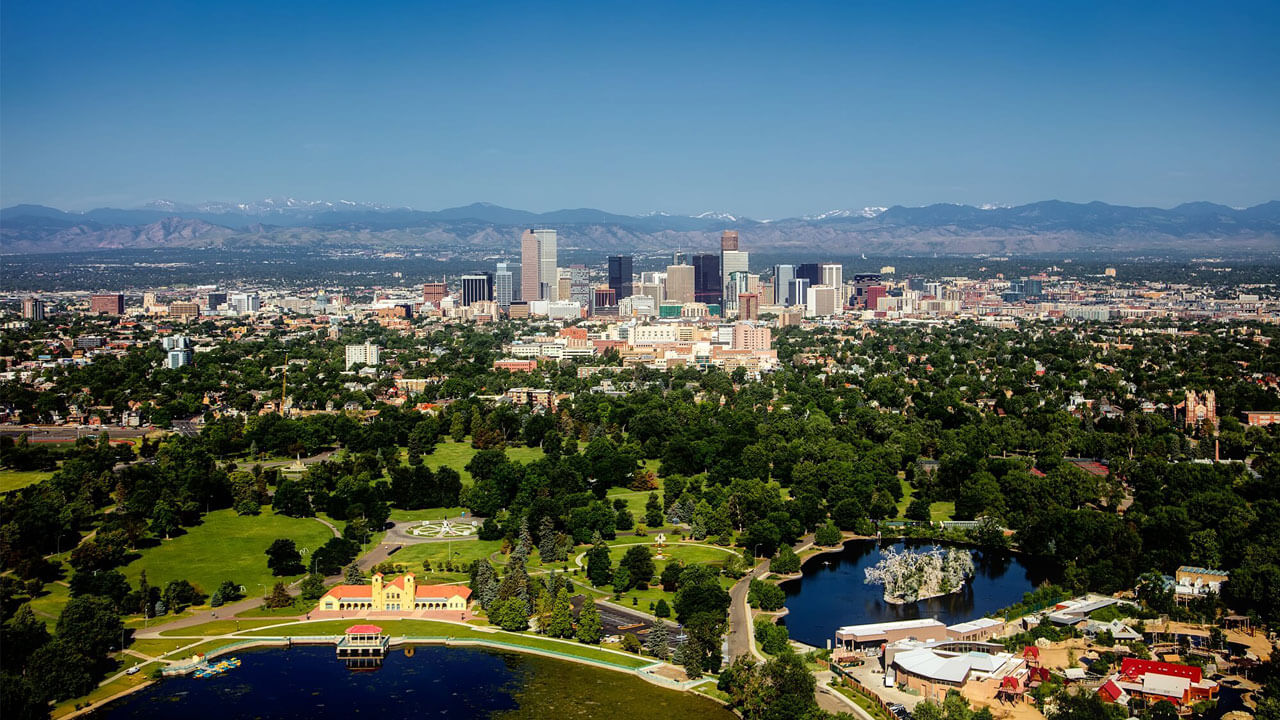 Stellar growth during the current economic cycle pushed effective rental rates in Denver ahead of the national average, according to the recent RealPage Asset Optimization webcast.

Before the current economic cycle started in early 2010, effective monthly rents in Denver were running right at $800, roughly 17% below the national average. While rent growth was strong across much of the nation during the past nine years, Denver price increases spiked early in the cycle, and held strong, allowing the market to close the rent gap quickly. By the early months of 2015, year-over-year rent growth had peaked at nearly 12% and effective monthly prices had pulled ahead of the national average.

At the end of 2018, monthly prices in metro Denver were at $1,462, nearly 8% ahead of the national norm. Among the 50 largest U.S. apartment markets, Denver ranked #17 for monthly rental rates at year-end 2018, positioning the market behind the typically expensive markets in the Northeast and California. 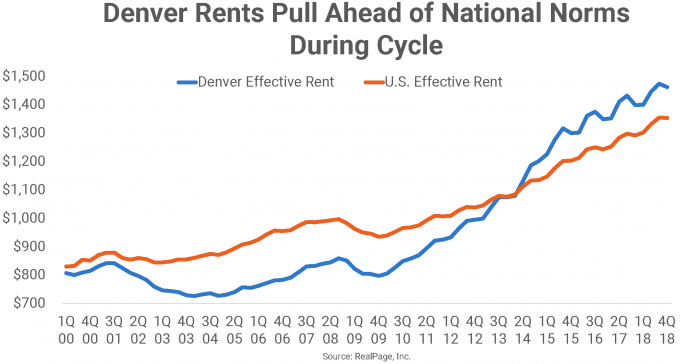 Overall, rents climbed a total of 53.1% in Denver during the current economic cycle. In comparison, the U.S. logged a price increase of 33% during that time frame.

Denver’s pricier Class A and B units registered sizable growth in the past nine years, expanding roughly 57% to 58%. Cycle growth for the Class C stock was more moderate at 34.6%, but that stride was more than double the 16% growth pace seen in the affordable product line in the nation overall during the same time frame.

As a result, all asset classes in Denver at the end of 2018 were commanding rents dramatically ahead of what this market saw before the cycle. Class A stock averaged at $1,872 at the end of 2018, a stunning $800 ahead of the rate seen in this product at the end of 2009. Some of that gap is due to a dry spell of new development prior to the current cycle. Between a period of heavy development in early 2000s and this most recent construction peak, there were nearly 10 years of lull, when annual delivery volumes rarely reached above the 2,000-unit mark. This large gap between high-development periods contributed to Class A rents being more than $150 below the U.S. average heading into the current cycle. That was the largest gap with U.S. rents at the product class level at year-end 2009.

Meanwhile, Class B stock was at $1,455 in 4th quarter, up nearly $700 over the past nine years. Class C units saw rents grow nearly $600 over the cycle, landing at a year-end 2018 effective rate of $1,208. That growth pace is even more impressive when compared to the average rise in Class C units in the nation overall, which was about half, or nearly $300.

The submarkets that have logged the most rent growth during the current economic cycle have been North Lakewood/Wheat Ridge, with a price boost of 62.9%, and a handful of areas in the northeastern portion of the market: North Aurora, Thornton/Northglenn and Southwest Aurora, where rents have swelled roughly 60% to 61% in the past nine years. As of year-end 2018, each of these submarkets still command effective monthly rents at some of the most conservative rates in Denver, between $1,240 and $1,380.

On the other hand, Denver’s most expensive submarkets have recorded the most reserved price increases during the current cycle. Downtown/ Highlands/Lincoln Park, Five Points/Capitol Hill/Cherry Creek and Highlands Ranch have all seen prices increase by less than 50% since the beginning of 2010. Monthly rates in these areas run at about $1,600 to $1,900.

All this rent growth in Denver occurred despite elevated completion volumes. During the current cycle, annual deliveries here have averaged at nearly 6,000 units, well ahead of this market’s long-term norm. Additionally, unlike a lot of metros in the U.S., Denver has seen new supply increase even further in recent quarters. Reaching a cycle peak in 2018, deliveries totaled at about 10,600 units, growing the existing inventory a sizable 3.8%. That volume places Denver among the national supply giants in 2018, following only the completion levels in the typically supply-heavy markets of Dallas, New York and Washington, DC.

In 2019, Denver is expected to record completions for another 11,227 units, once again placing this market among the nation’s new supply leaders. While the rest of the country is trending toward expansion into more suburban areas, Denver’s ongoing construction volumes are still targeting the urban core. Roughly 48% of apartments currently underway in Denver are rising in the Downtown/Highlands/Lincoln Park and Five Points/Capitol Hill/Cherry Creek submarkets.