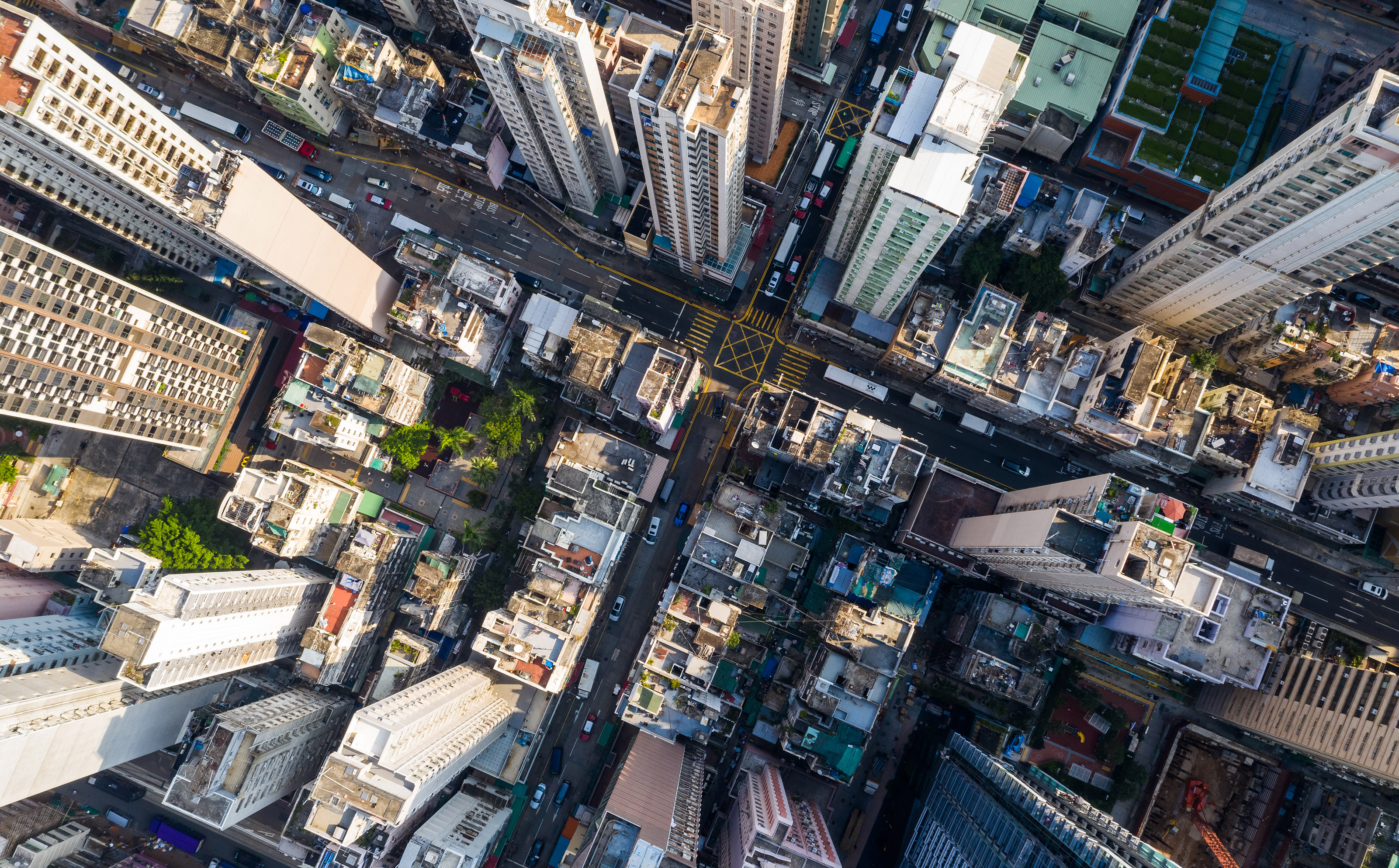 Since the sharp declines in both permitting and starts for multifamily development at the outset of the COVID-19 pandemic, the trajectory for multifamily has accelerated, compared to before the pandemic shutdowns.

In February, the annual pace of multifamily permitting decreased 4.5% to 597,000 units from January’s revised rate of 625,000 units, according to the U.S. Census Bureau. However, that was still 12% greater than the annual rate one year ago. Annualized multifamily starts in February were virtually unchanged (0.8%) from last month but were 37.3% greater than February 2021.

Month-to-month comparisons of the seasonally adjusted annual rates for both reflect moderate fluctuations and lead-lag relationships but the overall trend has steepened since April 2020. The lead-lag relationship between permits and starts for single-family units is evident in the increase in single-family starts in February of 5.7% following an increase in permits of 7.5% in January.

The following chart shows annual multifamily building permits since 2015 and the shift in the trend since April 2020. Whether this is a short-term change is debatable but the shift will likely soften somewhat going forward if this steeper trend is unsustainable. 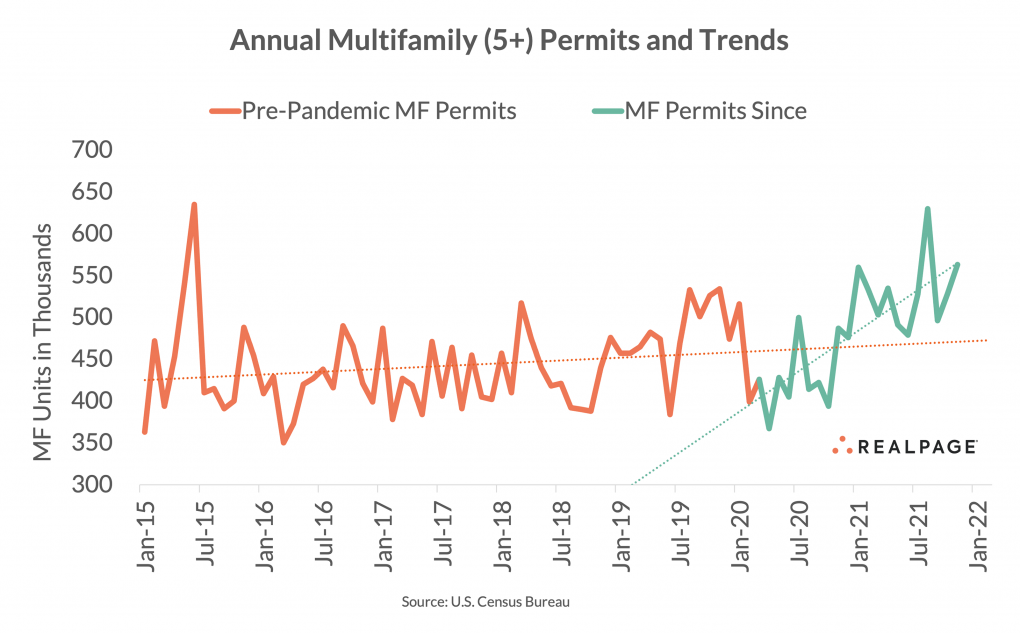 Continuing headwinds for multifamily development such as increased labor and material costs, construction delays, and other COVID-related difficulties, have affected the national multifamily completions rate with February’s annualized rate falling to 266,000 units, the lowest completion rate since April 2016.

At the metro level, nine of the top 10 permitting markets returned to the February list from January. New York continues to lead the nation in multifamily permitting with 34,061 units, about 140 units more than last year but about the same amount as last month.

Philadelphia, due to its tax program-related surge in permitting in December, continued in the #2 spot in February with 24,114 units permitted. That was more than 15,400 units greater than the year before.

Denver, Phoenix, and Nashville returned in order with Denver’s 16,579 annual permits almost matching Seattle’s pace, while Phoenix and Nashville were close together at 14,707 units and 14,395 units, respectively.

Los Angeles moved back into the top 10, replacing Washington, DC, which fell back to #13 after a one-month appearance, permitting 14,048 units for the year, about 13% more than last year. 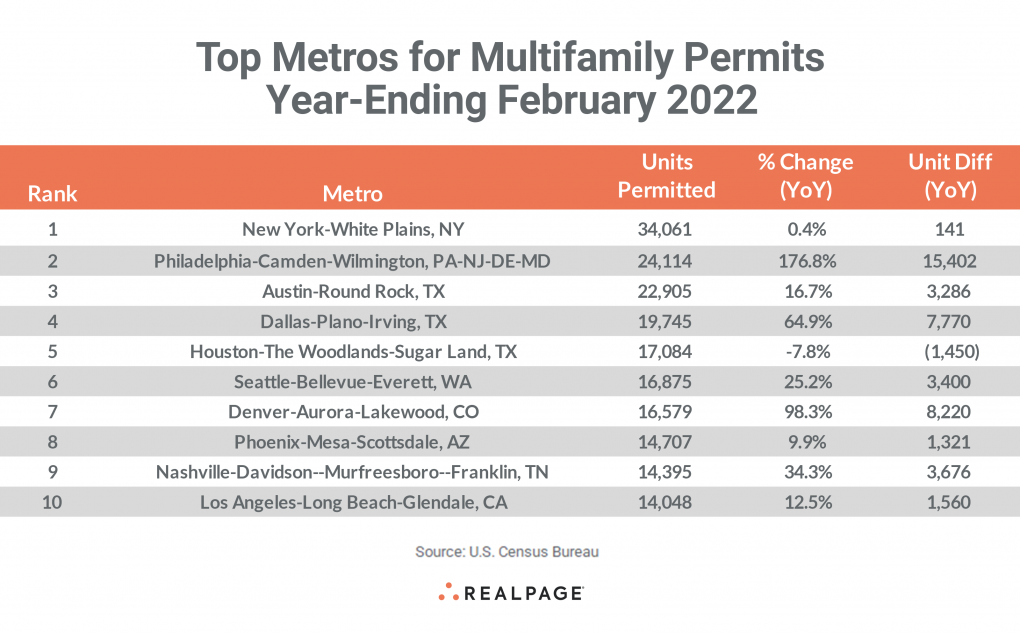 Nine of the top 10 multifamily permitting markets increased their annual totals from the year before and they were generally large increases (with the exception of New York), ranging from a low of 141 units in New York to more than 15,400 additional units in Philadelphia. Six of the top 10 markets increased multifamily permitting by at least 3,000 units over last year’s pace.

Half of the top 10 markets had more annual multifamily permits than the previous month, with Los Angeles up 6.6% from January’s annual total and Denver up 5.2%. Despite decreasing from last year, Houston saw an increase in annual permitting in February of 4.7% from last month, while Dallas improved 3.4%. As mentioned, New York had an almost insignificant increase of 0.1% for the month. Philadelphia, Austin and Phoenix permitted from 4.3% to 7.7% fewer units than last month’s annual totals, while Seattle and Nashville slipped by about 3.5% on average.

Below the metro level, the first nine of last month’s top 10 permit-issuing places returned to this month’s list with the seven remaining in the same order. The list of top individual permitting places (cities, towns, boroughs, and unincorporated counties) generally include the principal city of some of the most active metro areas.

The city of Philadelphia remained at the top of the list in February with an annual total of 20,428 units as the aforementioned tax abatement policy change caused a flood of permitting to close the year. 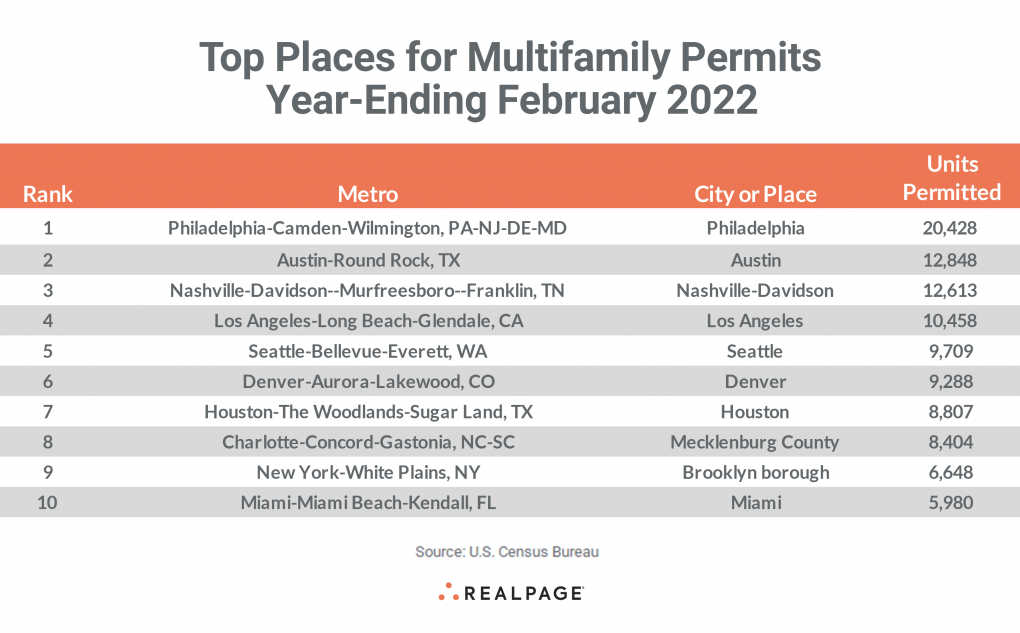 Austin returned as the #2 permit-issuing place, with 12,848 units, down about 670 units from last month. The city-county of Nashville-Davidson returned at #3 with 12,613 units permitted, about 540 less than last month. The cities of Los Angeles and Seattle switched places again at #4 and #5 with 10,458 and 9,709 units permitted, respectively, but Los Angeles was about 530 units higher and Seattle was 650 units lower than the month before.

The cities of Denver and Houston and Mecklenburg County (Charlotte) and the borough of Brooklyn remained in the #6 through #9 spots but only the first three had significant increases in their annual permitting over last month, while Brooklyn slipped by about 20 units.

The city of Dallas fell out of the top 10 permitting place list, replaced by the city of Miami at #10 with 5,980 units permitted.