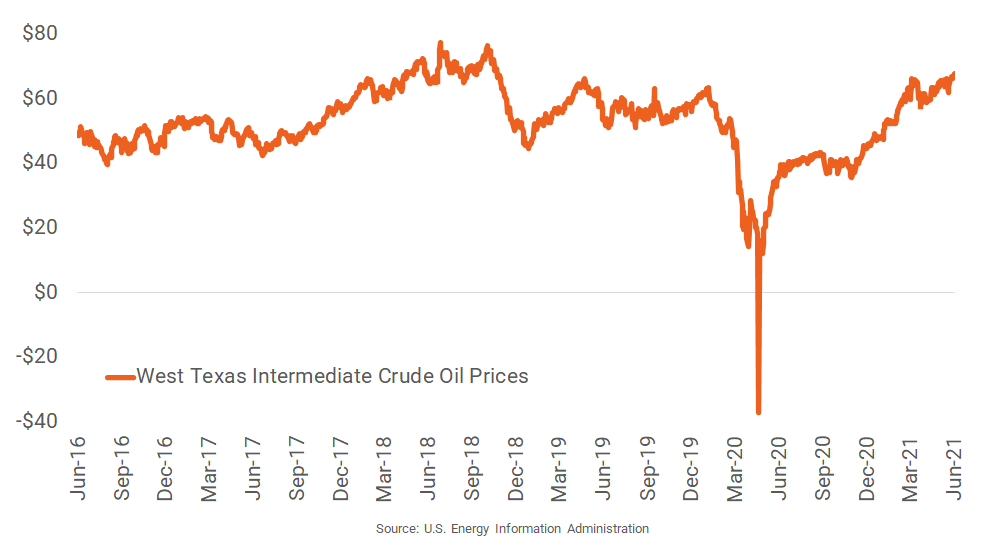 After hitting a low point during the early days of the COVID-19 pandemic, crude oil prices have been gaining steam and recently hit a three-year high, which is good news for apartment markets relying on energy-dependent economies. West Texas Intermediate crude oil was trading for over $67 per barrel as of June 1, according to the U.S. Energy Information Administration. This was the highest price the commodity has seen since October 2018. In fact, prices are now just $10 below the five-year peak from June 2018, when when crude oil was trading for over $77 per barrel. This recent performance is quite the turnaround from the decline seen just over one year ago, when crude oil prices fell into negative territory for the first time in history, as air travel halted in the wake of the global pandemic. Fluctuations in oil prices tend to affect apartment performances in markets like Houston, Midland/Odessa, Oklahoma City and Tulsa, where the energy sector plays an outsized role in the local economies. Midland/Odessa remains the nation’s least recovered job market, with an employment count that remains 16.2% behind pre-pandemic levels. The job markets in Houston and Tulsa are recovering about in line with the national average (about 5% away from full recovery), while Oklahoma City’s employment base is 3.3% away from February 2020 levels.