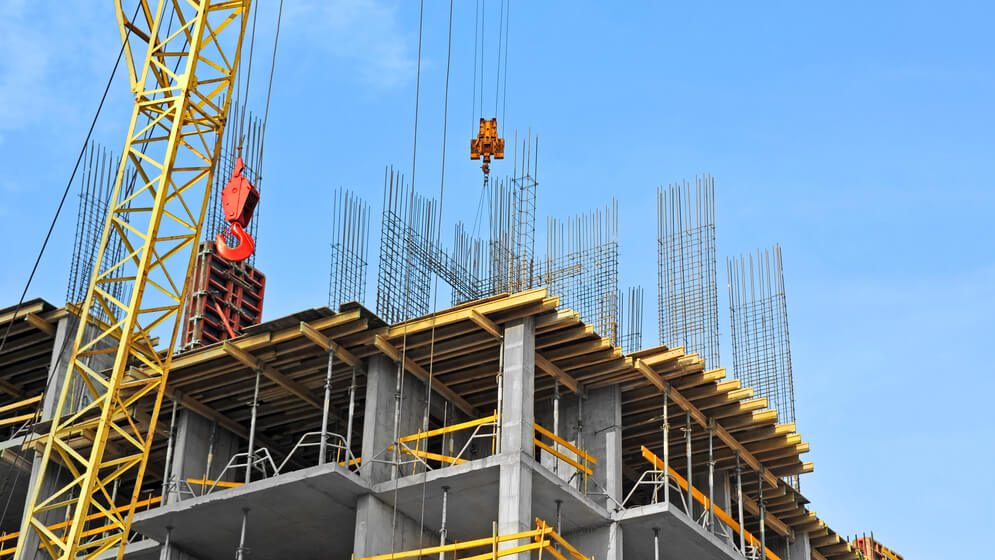 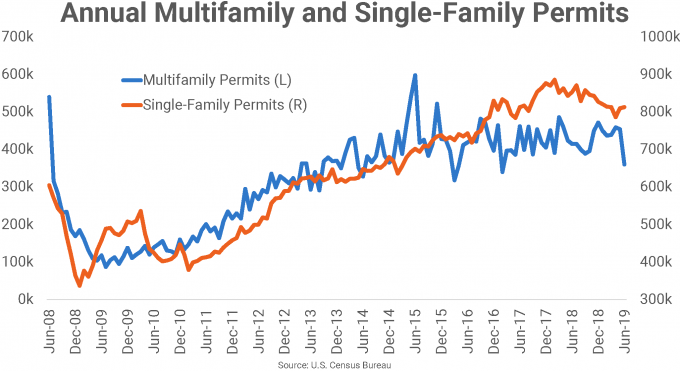 Annual multifamily permitting decreased in all regions in the past year, with the sharpest slowdown in the South (-17.8%) and Northeast (-14.8%) regions. The Midwest declined by 10.6% and the West slowed 6.2% from last year’s pace. The volume of permits in each region fell below their respective 12-month averages in June, although the small and volatile Northeast region saw an increase in its annual rate over May’s figure.

Unlike permits, multifamily starts were down in only the West region (-10.0%). Starts were up by about a third in the South (33.8%), about half in the Midwest (49.5%), and were nearly double the previous year’s annual rate in the Northeast (92.1%). The SAAR for starts in June were above their average rate for the preceding 12-months for all but the West region, although it was above 100,000 units for the third month among the past four.

At the metro level, all but one of last month’s top 10 permitting markets remained the same and a few changed places. The top four remained the same with New York, Houston, Dallas, and Seattle returning in order. Washington, DC and Los Angeles switched positions to #5 and #6 while Minneapolis-St. Paul and Austin switched to #7 and #8. Atlanta returned in the #9 spot and Chicago edged Orlando out of the #10 spot this month by only six units. 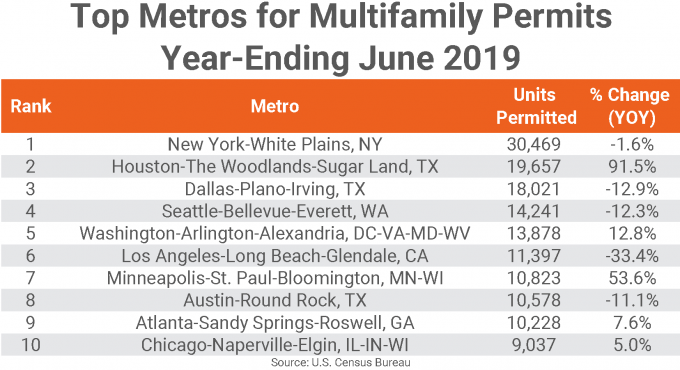 Half of the top 10 markets experienced increases in annual multifamily permitting from last year, as Houston, Washington, DC, Minneapolis-St. Paul, Atlanta, and Chicago increased their multifamily permitting momentum. The remaining five top 10 markets saw declines in permitting of from -1.6% to -33.4%. In net units, Houston permitted almost 9,400 more multifamily units than the preceding 12 months and Minneapolis-St. Paul jumped almost 3,800 units. Washington, DC, Atlanta and Chicago increased their permitting totals by roughly 400 to 1,600 units. The largest declines among the top 10 occurred in Los Angeles (-5,717 units), and Dallas (-2,663 units).

The list of top individual permitting places (cities, towns, boroughs, and unincorporated counties) generally include the principal city of some of the most active metro areas. Much like the top 10 metro list, the top 10 permitting place list includes the same 10 cities or permit-issuing place as last month. The city of Houston and Unincorporated Harris County led the nation once again for the year-ending June. The city of Austin, Charlotte’s Mecklenburg County, and the city of San Francisco rounded out the top five.

Of the top permit-issuing places (cities or counties), Charlotte, San Francisco, Denver, and Nashville did not have their metro areas make the top 10 list for permits by metro. Consistently placing among the top three for metro-level permitting, New York and Dallas had no permit issuing places in the top 10, as their apartment development pattern is more spread out among their suburbs.