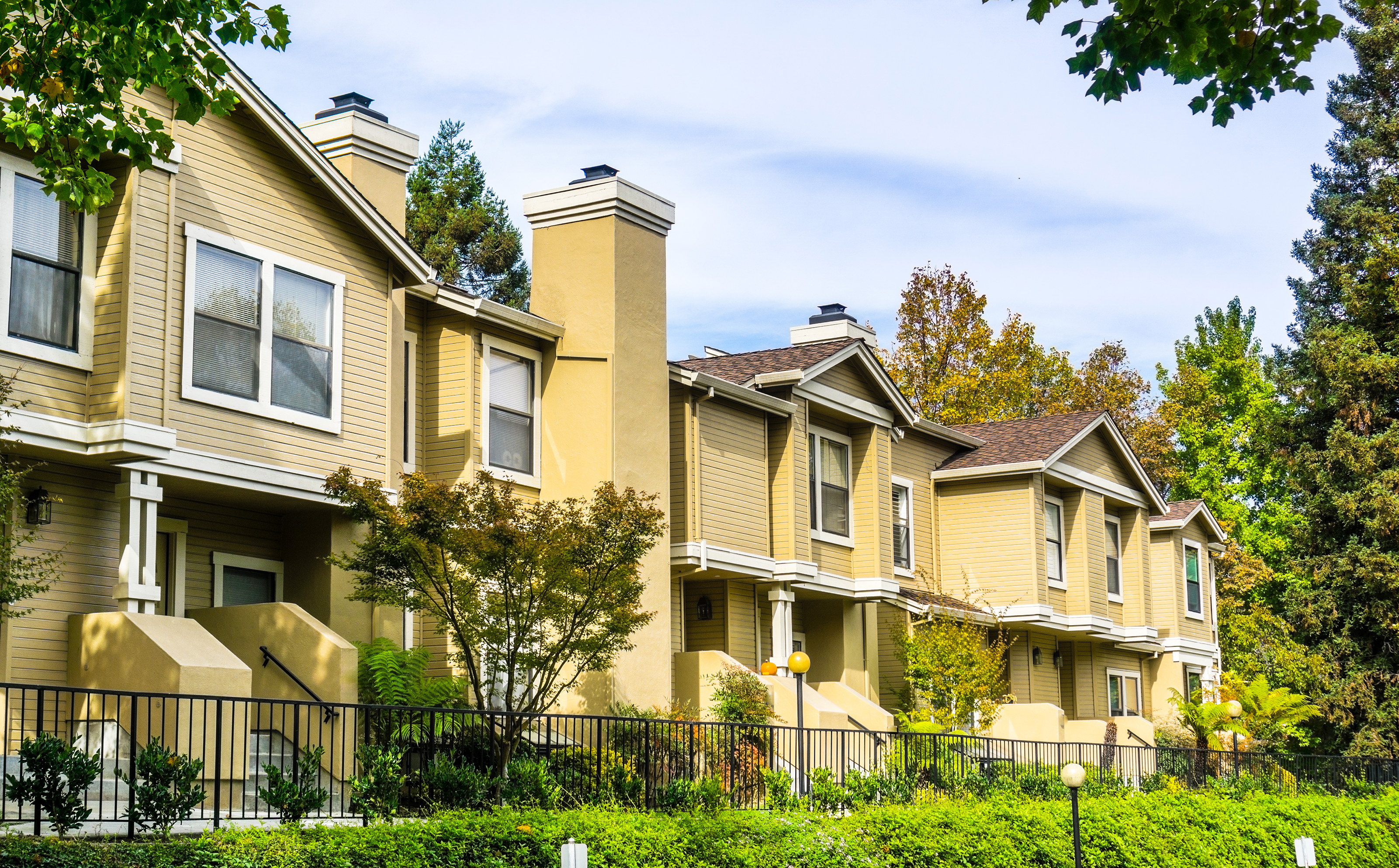 Multifamily building permits and starts were both up sharply in March compared to February, despite slight upward revisions to previous data.

According to the U.S. Census Bureau, the annual pace of multifamily permitting increased 10.9% to 672,000 units from February’s revised rate of 606,000 units. Permits are up 33.6% from the annual rate from one year ago.

Annualized multifamily starts were up 7.5% from last month and 28.1% from last year, with 574,000 units started. Both multifamily permits and starts have been on an upward trajectory since the end of the pandemic lockdowns.

Annualized single-family starts declined 1.7% from February and 4.4% from March 2021 to 1.2 million homes. Rising mortgage rates added to climbing home prices and limited inventory appears to be hampering the market. 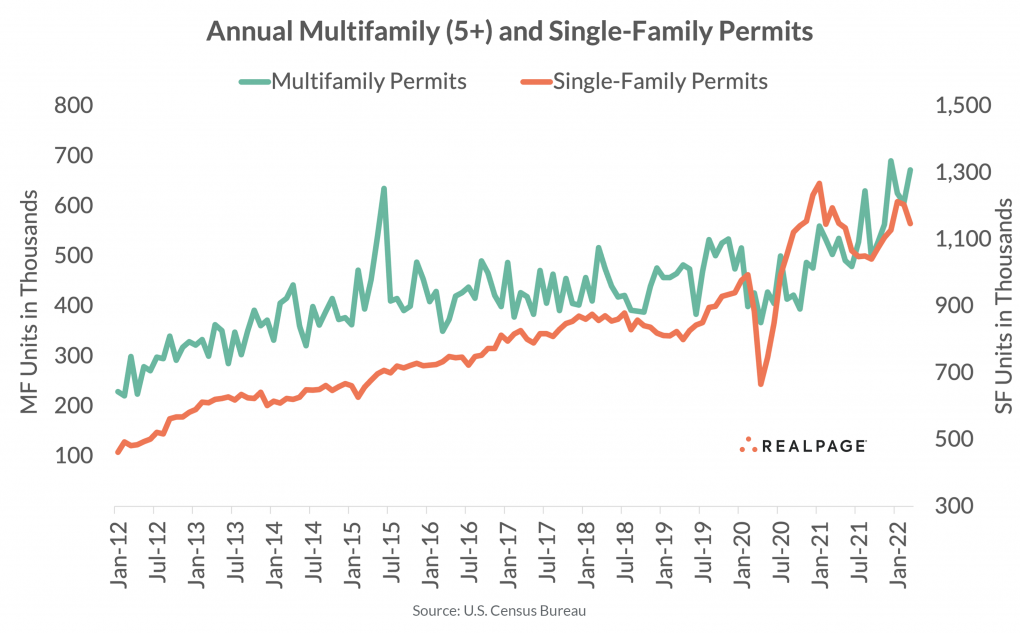 Philadelphia’s recent surge in multifamily permitting last December is hitting the starts stats now as the Northeast region saw a jump in annualized starts of 247.7% or 224,000 units in March. The West region had an increase in multifamily starts of 22.8% to 133,000 units, while the South was down by a quarter from last year to 157,000 units started. The Midwest region had a 9.5% decrease in multifamily starts to 59,000 units. Compared to February’s pace, the Northeast surged 288.3% and the West was up 42.1%, while the Midwest declined by 19.7% and the South was down 49.1%.

At the metro level, eight of the top 10 permitting markets returned to the March list from February, and several changed places. New York is still the leader in multifamily permitting with 38,384 units, more than 5,300 units greater than last year, with much of that gain in the past month alone.

Last month’s #9 and #10 (Nashville and Los Angeles) fell out of the top 10 in March, replaced by Minneapolis-St. Paul and Orlando. Minneapolis permitted a total of 13,697 units in the year-ending March but was only about 1,000 units greater than last year. Orlando permitted almost 5,700 additional units over last year to reach an annual total of 13,519 units in March. 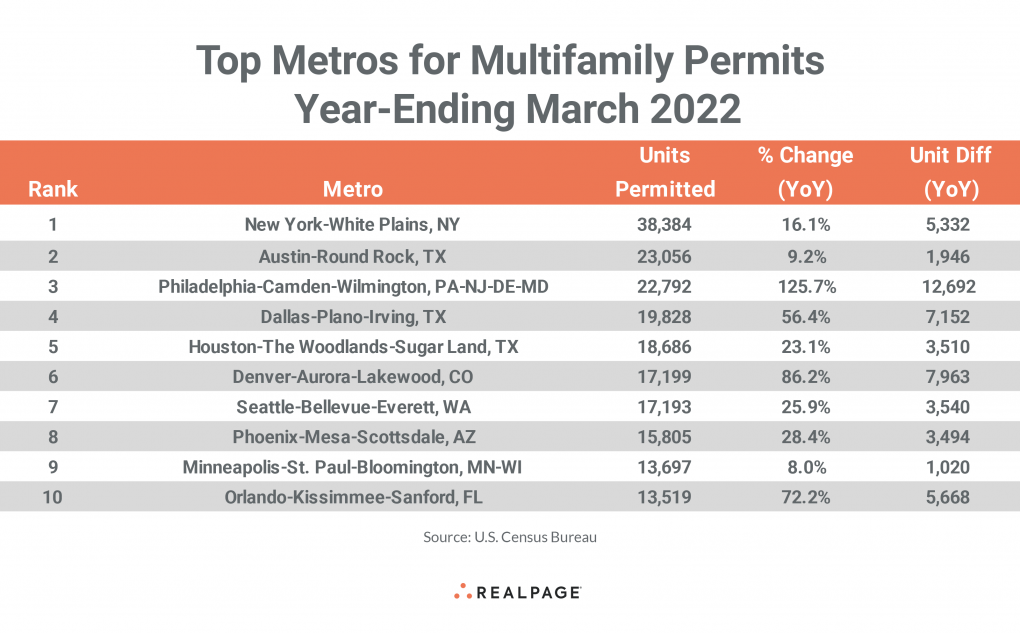 Below the metro level, the first eight of last month’s top 10 permit-issuing places returned to this month’s list with the four remaining in the same order. The list of top individual permitting places (cities, towns, boroughs, and unincorporated counties) generally include the principal city of some of the most active metro areas. 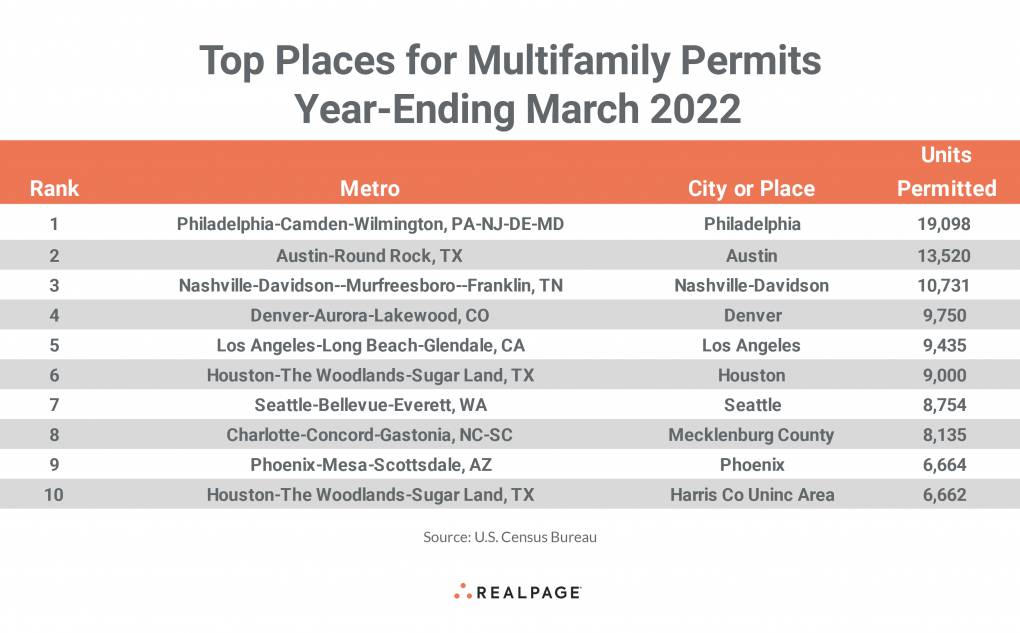 The city of Philadelphia remained at the top of the list in March with an annual total of 19,098 units as the city’s tax abatement policy change caused a flood of permitting.

The city of Los Angeles slipped a spot to #5 with 9,435 units permitted, more than 1,000 units less than the market’s previous total. Houston moved up one spot to #6 with exactly 9,000 units permitted and Seattle settled into the #7 spot, permitting 8,754 units for the year.

Mecklenburg County (Charlotte) returned at #8 with 8,135 units permitted, down about 270 units from last month. The city of Phoenix and Unincorporated Harris County (Houston) moved into the #9 and #10 spots in March with about 6,660 units permitted each, knocking the borough of Brooklyn and the city of Miami out of the top 10.