Metro Apartment Markets Have Their Ups and Downs 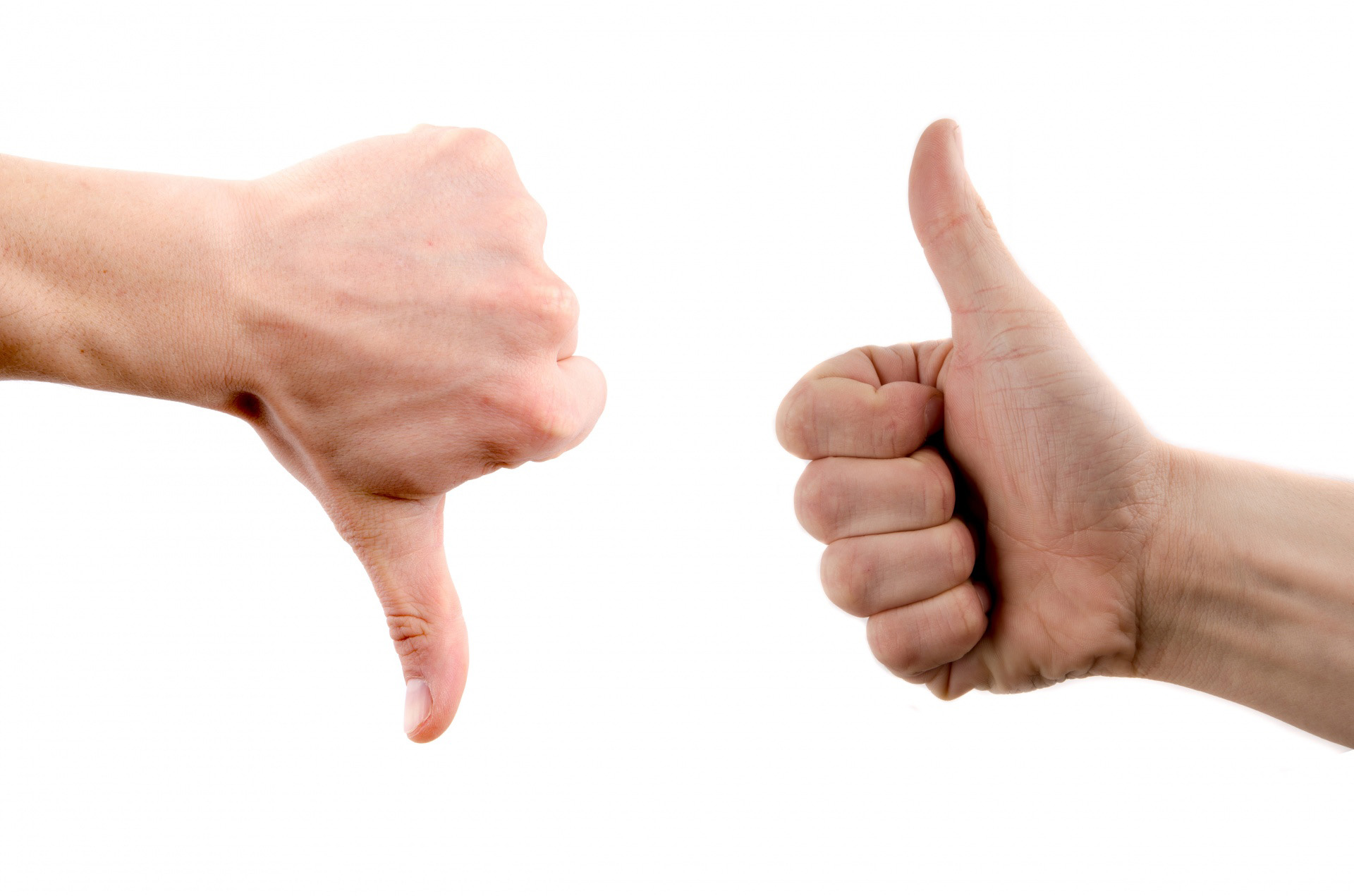 Anyone who has spent any time in the apartment sector knows that local markets can be volatile. Metro apartment markets have their highs and lows – some of them within a short time frame.

Here is a rundown of three markets that are on their way up, and three that face some challenges in the future, based on effective rent growth and other metrics culled from apartment market surveys by Axiometrics, a RealPage company. 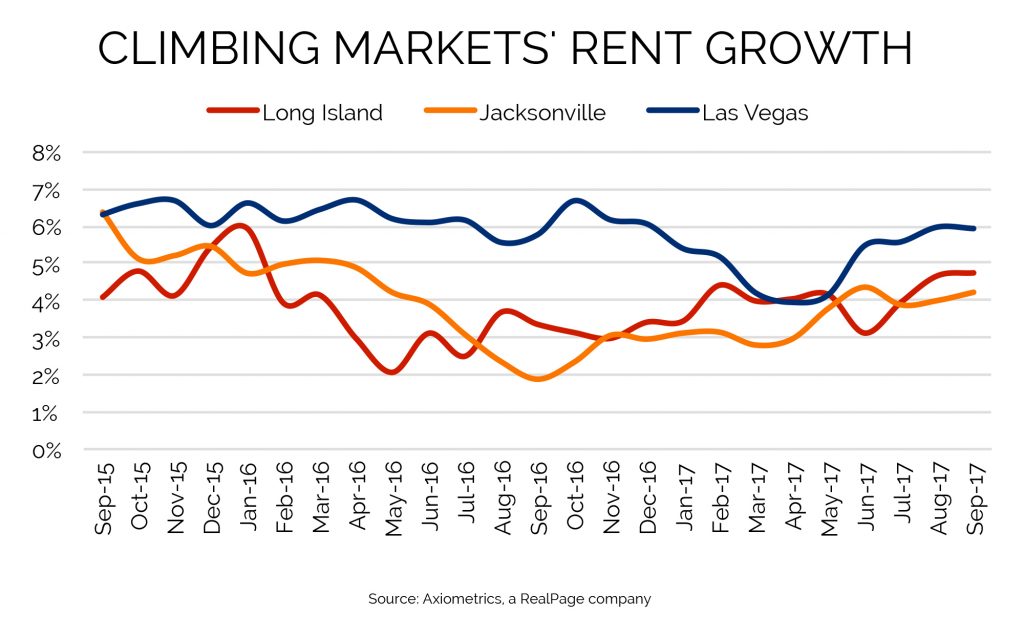 Las Vegas: With the second-highest effective rent growth among major metros in September (5.9%), according to Axiometrics, a RealPage company, Las Vegas has been one of the stalwart metro apartment markets in the face of national moderation.

Except for a lull this spring, annual effective rent growth has been in the 5-6% range for the past three years, apartment market surveys found, reflecting its status as a late-emerging market after the Great Recession. With job growth above the national average as the tourism industry has rebounded in the wake of job and wage gains, apartment demand is high. Supply increased in 2017 but looks to fall back down in the second half of 2018.

Occupancy, meanwhile has hovered around 94.5%, up about one percentage point from two years ago.

So Vegas is trending upward, as long as the slots and shows attract tourists and other industries.

Long Island: Cross the county line from Brooklyn or Queens into Nassau County, and behold the change from the negative rent growth of New York into the sunshine of the Long Island metro apartment market – with the third highest effective rent growth in the nation.

So just how is Long Island the No. 3 apartment market among the Top 50, while adjacent New York is No. 49, with -0.4% rent growth? A lot is because Long Island isn’t dealing with the significant amounts of new supply as New York is.

Some 12,728 units have already been delivered in New York over the first three quarters of 2017, and 7,060 have been identified for fourth quarter delivery – along with 28,395 units scheduled for 2018, apartment market surveys found. Long Island, on the other hand, has only 1,602 units expected in 2017 and 2018 combined. Also, Nassau-Suffolk properties were 97.7% occupied in September, the highest occupancy rate in the nation. With those figures, it’s understandable why Long Island rents are up and New York’s are down..

Jacksonville: Jacksonville has had its ups and downs, but recorded the fifth highest effective rent growth among the Top 50 in September (4.2%). It was a down market last fall, with 1.9% rent growth in September 2016. A rocky start of the year saw the figure drop to 2.8% in March before rising to September’s 4.2%, Jacksonville’s highest rate since May 2016.

Jacksonville job growth has slipped somewhat in the past year, but except for a September blip, has remained above the national average. Occupancy has been above 95% — or, essentially full – for five straight months, the first months above that mark since September 2015, the market surveys discovered.

Supply has not been much of a factor in the Jacksonville metro’s apartment market, but it may start to be. Some 1,278 new units have been identified for delivery in the first half of 2018 before construction slacks off later in the year. But if job growth can rebound from its September low, the market should keep its upward momentum. 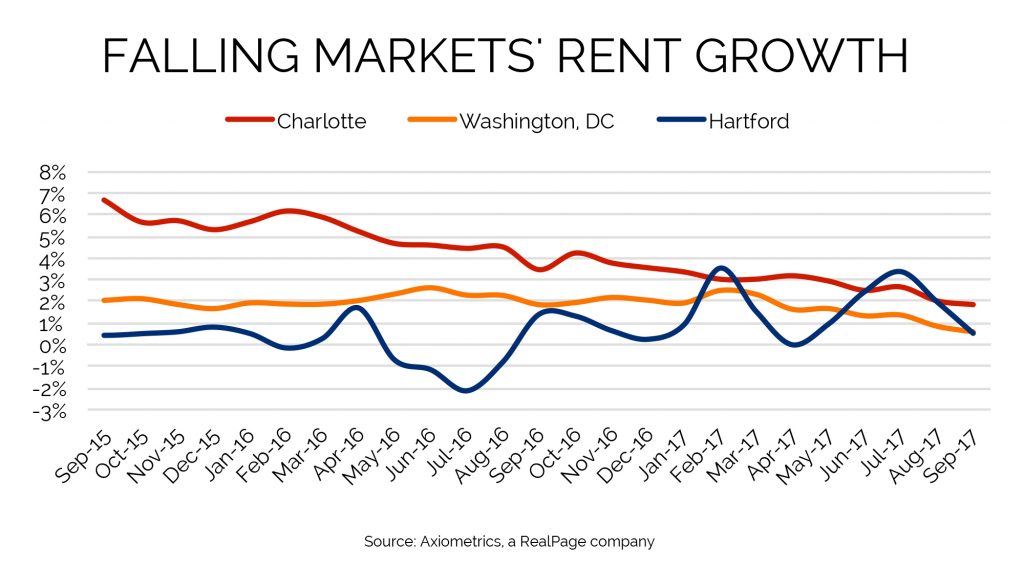 Charlotte: It was just 20 months ago that the Charlotte metro apartment market was among the strongest in the nation with annual effective rent growth of 6.2%. Now, rent growth is 1.8%.

Charlotte has been a victim of the bane of apartment markets’ existence: decreasing job growth and increasing supply. The annual job growth rate dropped from 4.0% in September 2016 to 2.1% in September 2017 – the difference between job gains of 44,900 and 24,700.

Construction, on the other hand, has kept on going. Some 3,157 units have been identified for fourth-quarter delivery – on top of 5,692 completed so far this year. Not to mention the 5,488 scheduled for Quarters 1-3 next year, before the pipeline finally starts emptying out.

Washington, DC: For a year, the apartment capital in and around the nation’s capital was teasing us. After a very rough 2013 and 2014, DC kept pushing past 2% annual effective rent growth, then retrenching, according to Axiometrics apartment market surveys.

Though DC rent growth has not returned to negative territory, it stood at 0.6% in September, even though occupancy has remained stable in the mid-95% range. Job growth has declined slightly, but not to the extent of other markets, like Charlotte.

If job growth doesn’t shoot up, the rent growth future may be challenging.

Hartford: This metro apartment market isn’t listed among the down markets solely because of its September annual effective rent growth of 0.5%. It’s also because performance this year has been a yo-yo.

Job growth has been at or below 1.0% for the past two years, and while supply increased this year, only 923 units were identified for 2017 delivery – 656 of them in the first half of they year. Occupancy is steady around 95%.

That’s why Hartford is a mixed bag. No one knows what’s coming up next.