Memphis’ apartment market has been a generally steady performer throughout the current economic cycle. Moderate rent growth and limited new supply should extend that trend through 2018.

Memphis’ overall rent performances are usually tied to performances among product at the top end of the market. In 2017, top-end Class A units recorded rent growth of just 2.2%. That middling performance follows healthier increases that bolstered the metro’s rent growth levels in 2016.

Moderation in the Class A segment coincides with increased supply volumes. Memphis received 1,112 new units in 2017 – a high number compared to historical patterns but a relatively small share of existing stock. Inventory expansion measured just 1.1% in the past year. 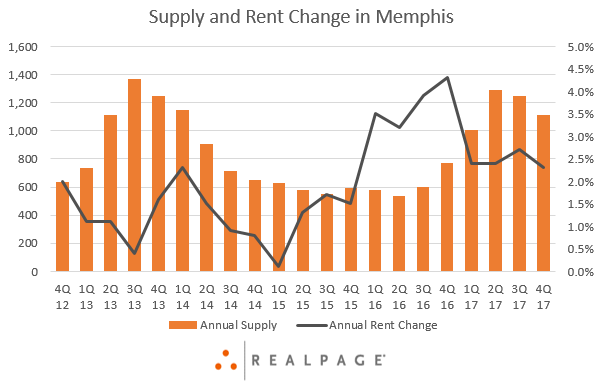 While top-end units generally influence rent growth in Memphis, the large block of lower-tier units hold back the metro’s occupancy rates. Vacancies are numerous in the Class C product segment, which has averaged occupancy of just 87.6% in this cycle. In 4th quarter 2017, occupancy showed some improvement, landing at 91.3%. Still, that rate trailed both upper- and middle-tier product by at least 3 percentage points.

The Memphis market was 93.1% full at the end of 2017, the second-lowest occupancy rate among the 50 largest U.S. markets.

A pattern similar to that in product segments exists among submarkets, as upper-end submarkets bolster the metro’s overall performance. The Germantown/Collierville suburban pocket is an outperformer for both rent growth and occupancy despite being a spot where new supply consistently comes on stream. 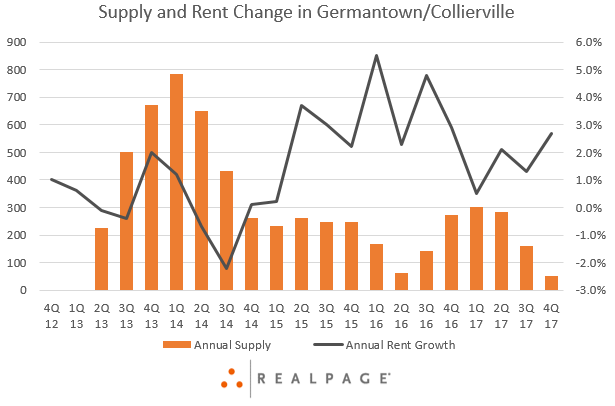 Though completion volumes fell in Germantown/Collierville in 2017, there were roughly 800 units under way at the end of 2017. That represents about 80% of the metro’s total construction volume.

Going forward, the Memphis apartment market should to see more of the same. Fundamentals in the market overall remain soft, outside of Germantown/Collierville. Without a clear catalyst, Memphis should remain a low-occupancy, mediocre rent growth market in 2018.

Lots More Apartments Are On the Way in 2021