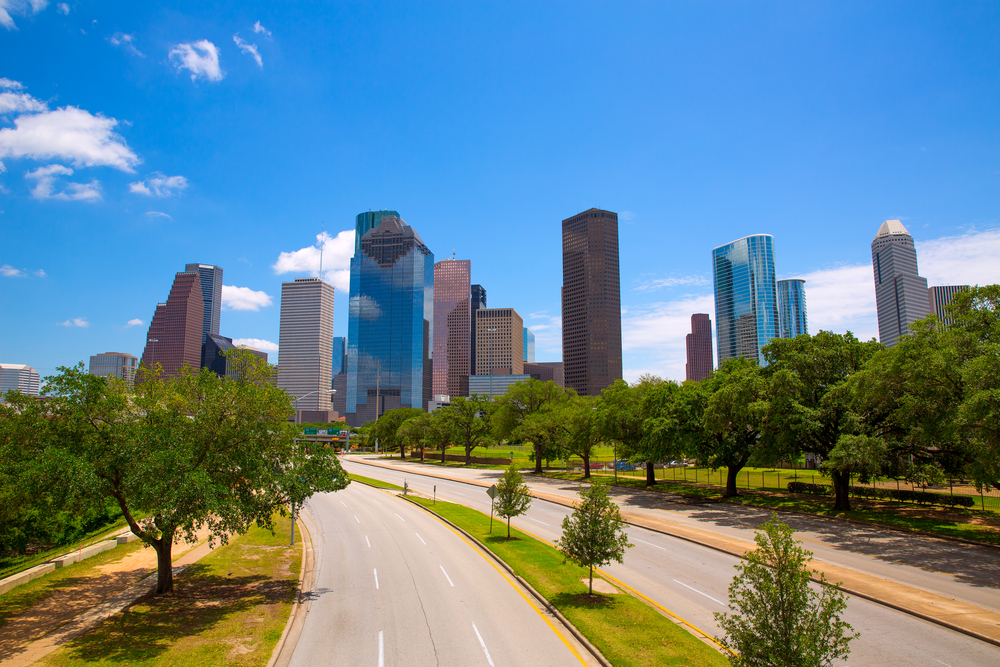 Having a holistic understanding of apartment market fundamentals is a challenge. A variety of economic indicators can inform us of broader market health and lend insight to future market performance. However, we also know that not all of these variables affect markets uniformly, and at that, a strong performance in one market does not necessarily mean that the same level is as significant in another market. For this reason, a composite risk scoring system is needed.

MPF Research’s scoring system ranges from zero to one, and leverages both internal data and publicly available economic data. To estimate the level of risk, the probability of a rent recession, a period of two or more consecutive annual rent decreases, was calculated. The result indicates the relative level of risk a market is facing for such an event, compared to its historical performance. As an example, a score of one indicates the riskiest market that an area has seen since MPF Research began tracking it, whereas a score of zero indicates the least risk. The score acts as a composite of the variables referenced earlier, which include change in rent, absorption, occupancy, apartment inventory, employment, personal bankruptcies, population, median incomes and median home prices. To better illustrate the individual components, the variables were ranked against their historical performances to indicate how hot or cold they are running. It is difficult to decipher a clear message when data becomes more varied, and this risk scoring system seeks to condense multiple pieces of vital information into a more digestible format.

So where do we see elevated risks as of 4th quarter 2016? 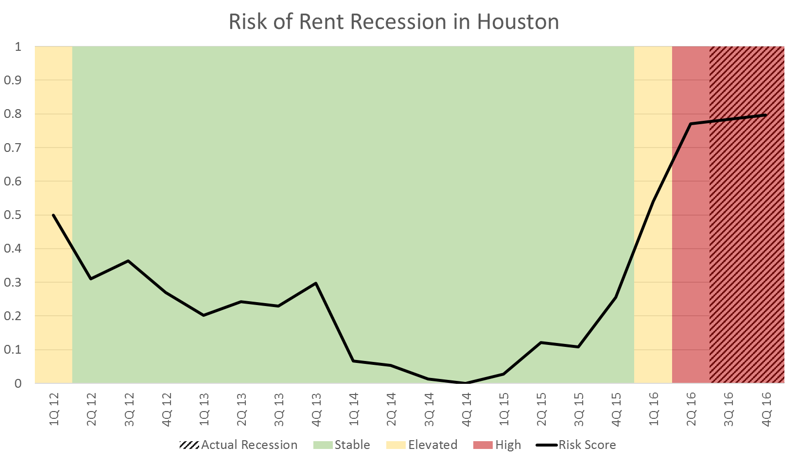 It should come as no surprise that Houston is currently flashing red, and takes the title for our riskiest market. Houston remains an unstable market, provided the general momentum of economic and apartment market variables.

Let’s consider how 4th quarter 2016’s data stacks up to Houston’s performances since 1998. The following table provides some perspective on how the variables that contribute to our risk model stack up in terms of their historical performances. 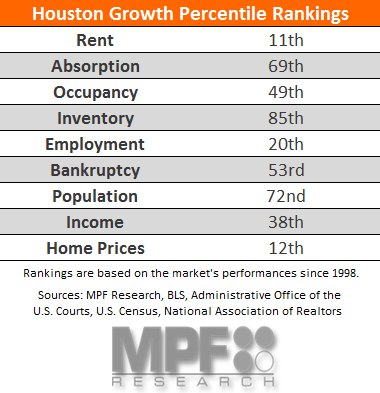 Rent has contracted on an annual basis for two consecutive quarters in Houston, meaning that the area already qualifies for our definition of a rent recession. The market’s annual rent decrease of more than 1% in 4th quarter 2016 marked the weakest rent performance the market has seen since 2nd quarter 2010, and the figure lands just outside the bottom decile in terms of relative strength when compared with the market’s historical performance. Though absorption remains elevated, occupancy continues to weaken on an annual basis, sliding in four of the past five quarters. The bad news seen in the weak rent and occupancy data is compounded by the fact that Houston is seeing strong net inventory growth. Income growth is weakening, while personal bankruptcies remain elevated in the region. Population growth has been a steady boost to the region’s economy, and the last reported figure for the region was still strong. 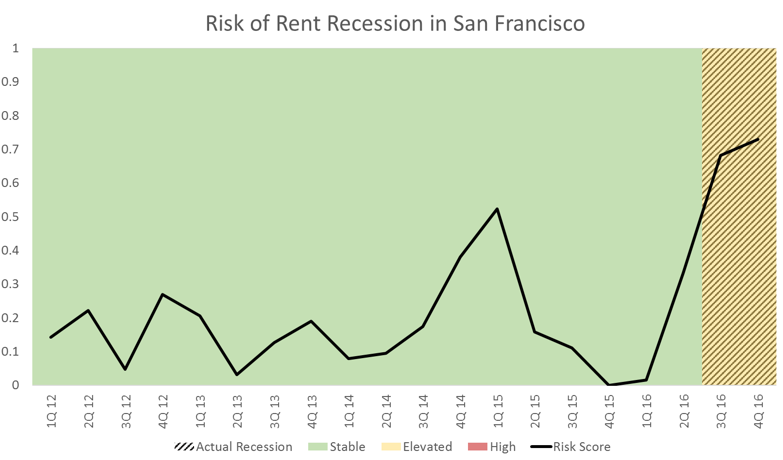 San Francisco is another metro currently experiencing an actual rent recession, after seeing annual rents recede for the past two quarters. While the current risk score reads “elevated,” the market is near the high-risk classification threshold. Let’s see how recent performance stacks up to the metro’s performance since 2001. 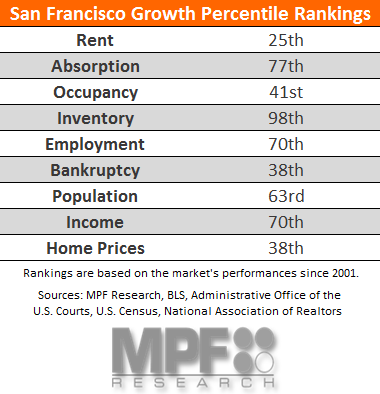 Rent performance in San Francisco has fallen to the bottom quartile of performance for the market, while net inventory growth numbers are near all-time highs. Absorption is still strong, but occupancy change has slowed to the bottom half of the performance distribution. The message is not quite as clear with the most recent performances of economic indicators for the area. Employment and income growth remain historically elevated, while personal bankruptcies continue to decline, albeit at a slower pace. San Francisco currently qualifies for an “elevated” risk rating, indicating that the underlying forces of the current rent recession in the area are not as strong or uniform as they have been in past cycles. The momentum of upcoming economic data will strongly determine the risk momentum for San Francisco in coming quarters. 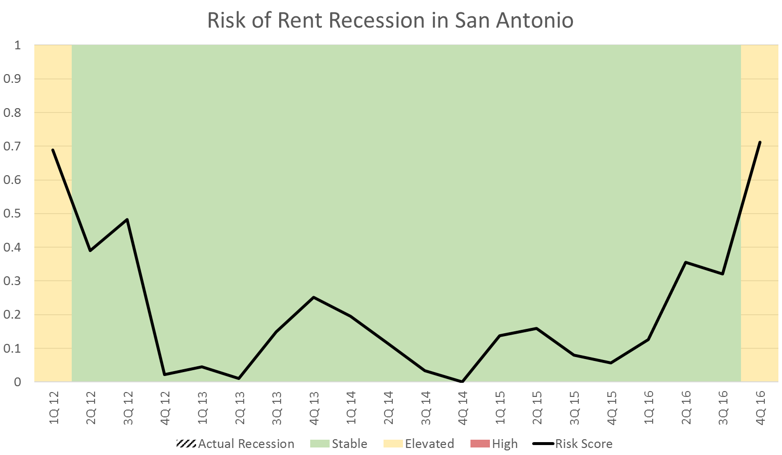 San Antonio is a surprise entrant to this list. The metro, per our ratings, has seen a steady increase in risk over the past year. While San Antonio isn’t necessarily as strongly exposed to natural resources and supporting industries as its fellow Texas market, Houston, the underlying strength of the apartment market has destabilized as growth has begun to slow across many of the market’s metrics. How are the constituent elements of our rent recession rating currently performing compared to their historical performance since 1995? 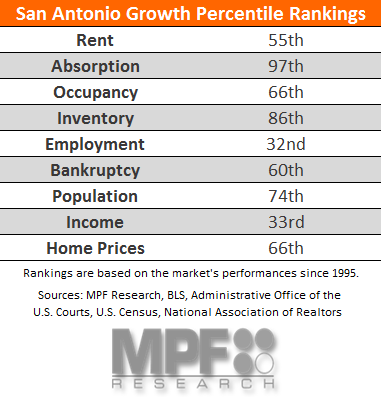 Rent growth weakened consistently over the course of 2016 in San Antonio, while net inventory growth remains on the higher end, historically, for the market. However, absorption rates in the metro are near record highs, and annual occupancy growth has generally improved over the year. Employment growth has seen a pronounced slowdown, with income growth following, leading to growing personal bankruptcies. Population growth remains healthy in San Antonio, which has supported home price appreciation in the metro. 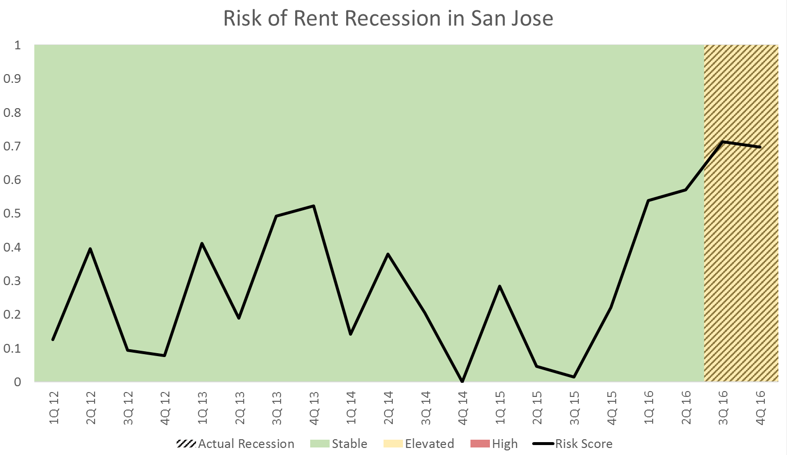 Risk is also building on the southern side of the Bay Area. San Jose saw increasing stability in data underlying its apartment market through 2014 and 2015, but risks have been building in the area since late 2015. The area has also slipped into a technical rent recession in the past two quarters. How are recent performances in the market compared to the market history going back to 2001? 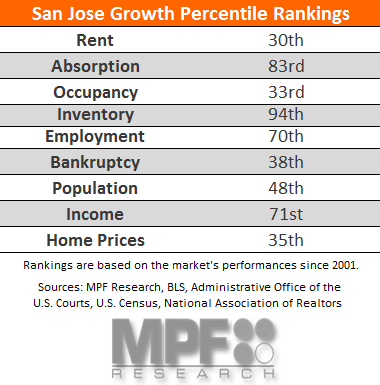 Apartment metrics in San Jose are broadly moving in the wrong direction, aside from absorption. With the metro already seeing two consecutive quarters of rent decreases, occupancy has loosened over four consecutive quarters, and inventory is growing at a strong pace. The story told by economic variables is not quite as dire, as employment and income continue to grow at a decent pace. However, home price and population growth are slowing. While the area technically meets the criteria for a rent recession, it does not seem that the forces placing negative pressure on the apartment market of the region are currently as strong as they have been in previous market contractions in the region. 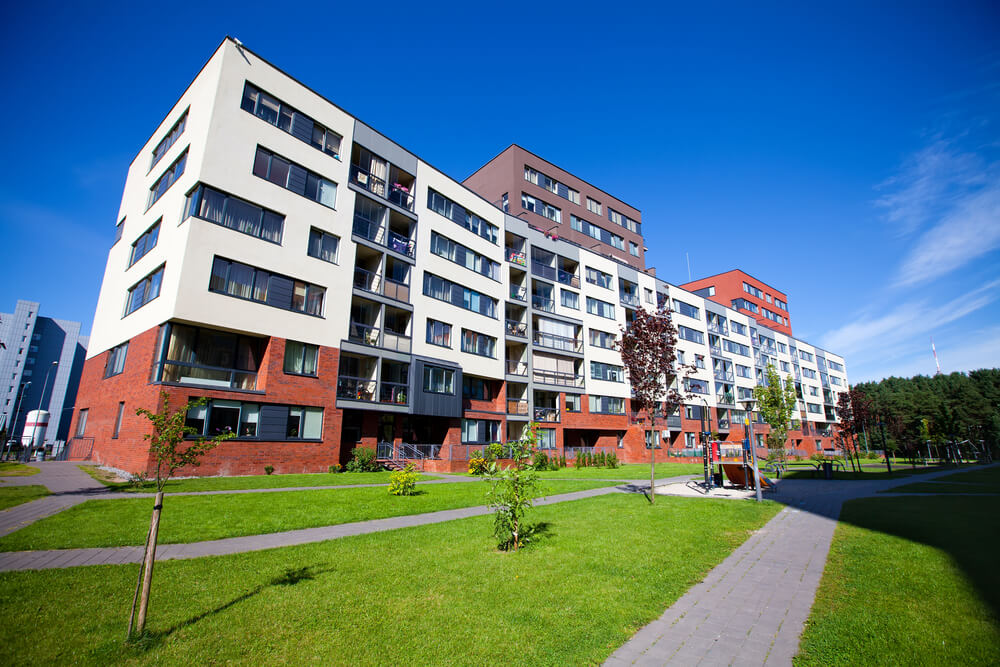 Austin has been an exceptionally strong market, but risks have accumulated in the market over 2016. Performances are slowing when compared to the more than 20 years MPF Research has tracked the market. 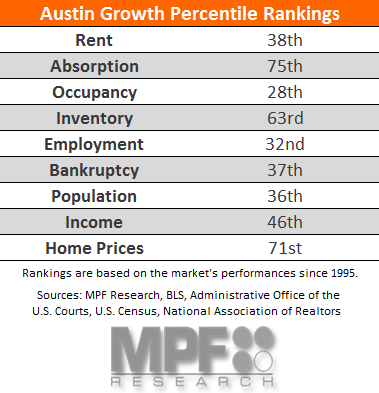 Rent and occupancy growth in 4th quarter 2016 slowed substantially when compared to the market’s history dating back to 1995. Annual absorption remains elevated, and net inventory, while still high, remains substantially lower than the near 7% rates seen in Austin during the last recession. Employment growth has slowed consistently in the metro since 2015, and income growth in Austin is middling when compared to growth rates seen previously. Population growth has yet to see rates anywhere near those experienced in Austin in the mid-2000s, but the continuous flow of new Austinites remains strong enough to maintain stronger home price appreciation. While Austin is facing elevated risk, the market landscape is not as weak as the other metros covered here.

Rounding out the top 10, South Florida and Denver are also currently rated as experiencing elevated risk, while Phoenix, Dallas/Fort Worth and Detroit remain stable, but closer to crossing into elevated risk scores.

Some commonality does exist across the riskier markets profiled here, namely that rent growth in these markets has weakened or turned negative, while inventories continue to grow at a strong pace. Employment and income growth has stepped down for most of the riskier markets, aside from the Bay Area. Despite rent recessions already existing in three of the markets detailed above, only Houston is currently demonstrating high risk, while San Francisco and San Jose remain in the “elevated” category, illustrating that underlying economic and apartment market conditions are not currently as weak as in previous rent recessionary periods.

It should be remembered that these risk scores are relative to their respective market histories, an important detail, as metros do not react uniformly to the same risks. The inverse there, however, is that it is difficult to compare these figures with each other, as the depth and duration of rent recessions varies greatly from metro to metro. The scores can, however, help to holistically view the broad impact of those variables that tend to cause metros to slip into rent recessionary periods exceeding more than two quarters.

Next in this series, we explore the nation’s most-stable apartment markets of 2017.