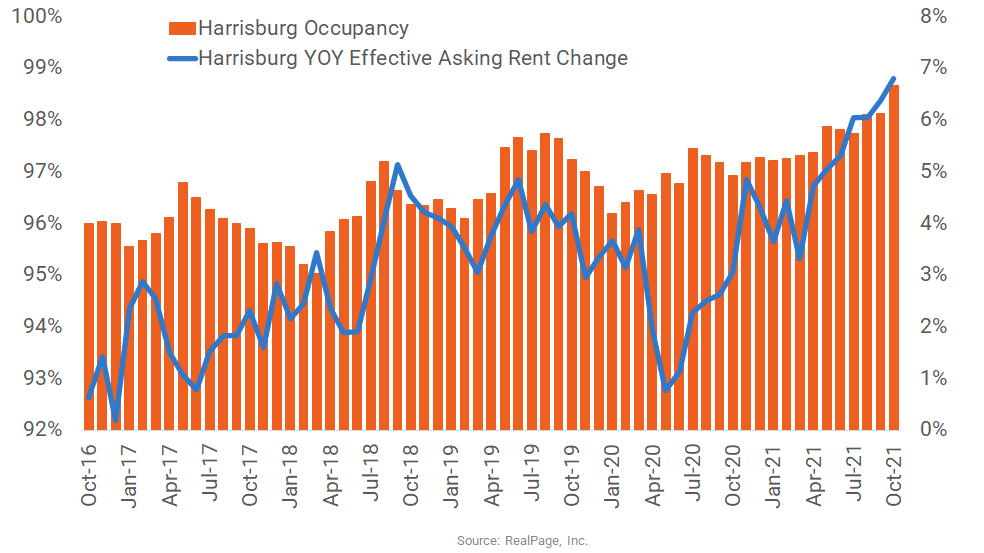 A decade of limited new apartment supply has led to a record occupancy performance in the capital of Pennsylvania. Occupancy in Harrisburg reached an all-time high of 98.7% in October, a rate that ranked in the top 20 among RealPage’s core 150 apartment markets. Occupancy in Harrisburg has been slowly trending upward since reaching a recent low of 94% in early 2016 and has been above 96% for more than three years. Tight occupancy has led to rent increases that have also reached all-time highs. While annual change in effective asking rents stayed consistently positive during the past decade, the typical yearly pace of increase has been modest at 2% to 3%. However, effective asking rents in Harrisburg have jumped over the past year, with a 6.8% increase in the year-ending October 2021. While that was the biggest rent increase the market has seen since RealPage began tracking the market in 2010, it was a bottom 20 performance nationally. Harrisburg is a small market about 100 miles from both Baltimore and Philadelphia. The Government sector provides some stability for Harrisburg in downturns, but also can limit upside potential.