While the end of the 2017 leasing season marked another strong year for student housing performance, the off-campus leasing velocity was down slightly from the previous two years. But a divergence occurs when you compare the rates at some schools that received new student housing supply in 2017 and others that didn’t.

Overall, leasing velocity at off-campus housing properties, based on three-year same-store properties, was ahead of 2015 and 2016 early in the leasing season but began to pull back around March. It remained relatively in line with Fall 2016 averages the remainder of the season. 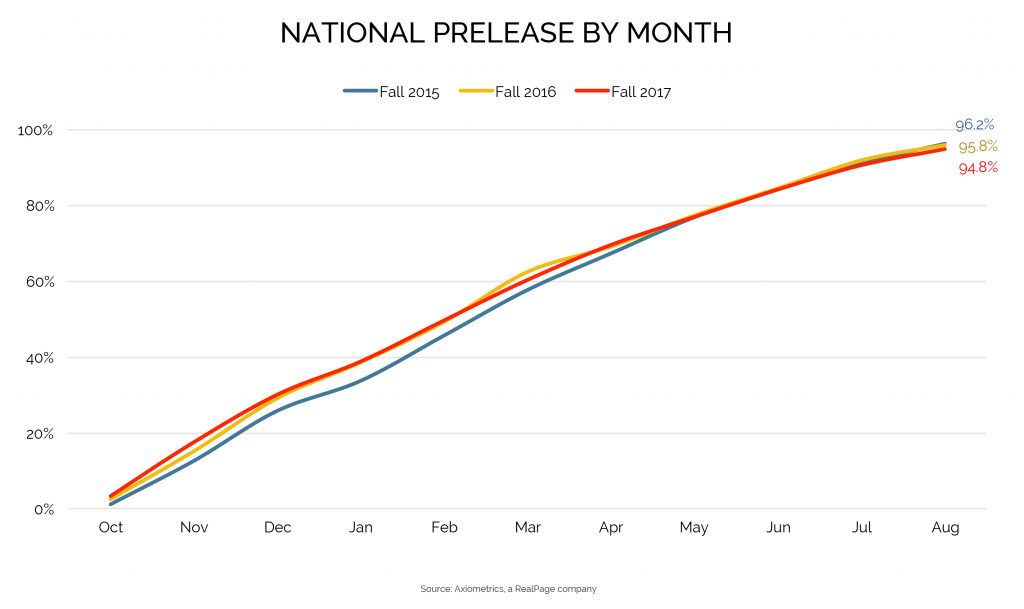 The results are, in part, attributed to the universities at which the amount of new student housing supply has helped moderate performance. If we compare three-year, same-store properties between markets that saw new supply this fall to those that did not, different trends emerge.

And while overall prelease didn’t end ahead of last year, these are still solid results, and rents haven’t necessarily dropped. Nationally, effective rent levels averaged $641 per bed for Fall 2017, up 1.9% from Fall 2016. This is similar to what the sector has seen historically and only 40 bps lower than the long-term average for conventional apartments.

Many anticipated that 2017 would be another strong leasing season for the off-campus housing sector, and that’s what occurred – in most markets. Leasing velocity was discussed above, and annual effective rent growth remained around historical levels.

More than 37,000 student-housing beds have already completed construction and opened for the semester, and 8,000 more are anticipated to deliver in the coming weeks and months. These figures are nearly the exact amount reported in last year at this time. Additionally, the 45,500 new beds this year is fairly in line with the volume of supply seen each year since 2015. But this supply has been added to new university markets, as well as the more saturated markets. 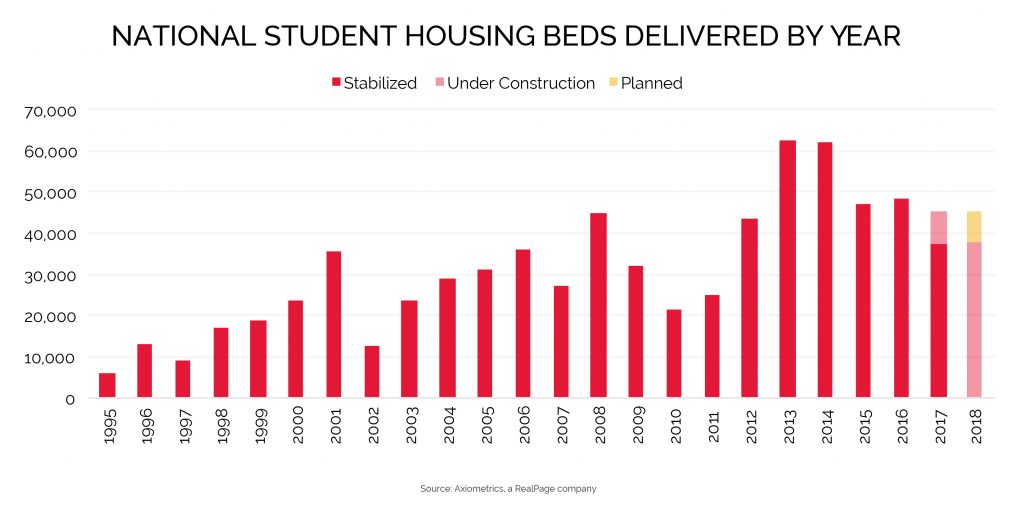 The volume of new off-campus student housing supply for Fall 2018 delivery is expected to remain around this level. Axiometrcs, a RealPage company, has identified 45,200 student housing beds to come to market, with 7,600 beds still in the planning stages. This supply is anticipated to be delivered across 67 universities, compared to 73 universities this fall, according to student housing research.

However, many of the other universities in the table below are anticipating an increase in new supply after little to no new off-campus deliveries in 2017. 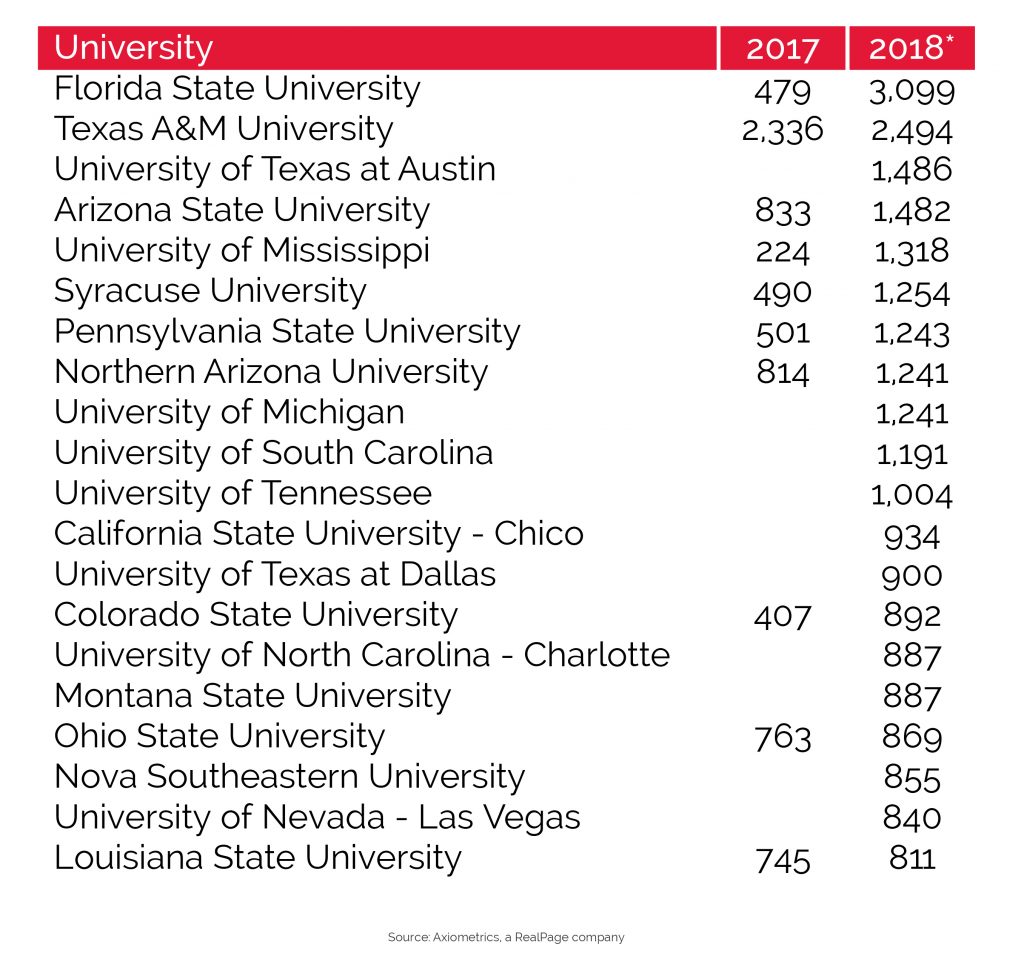 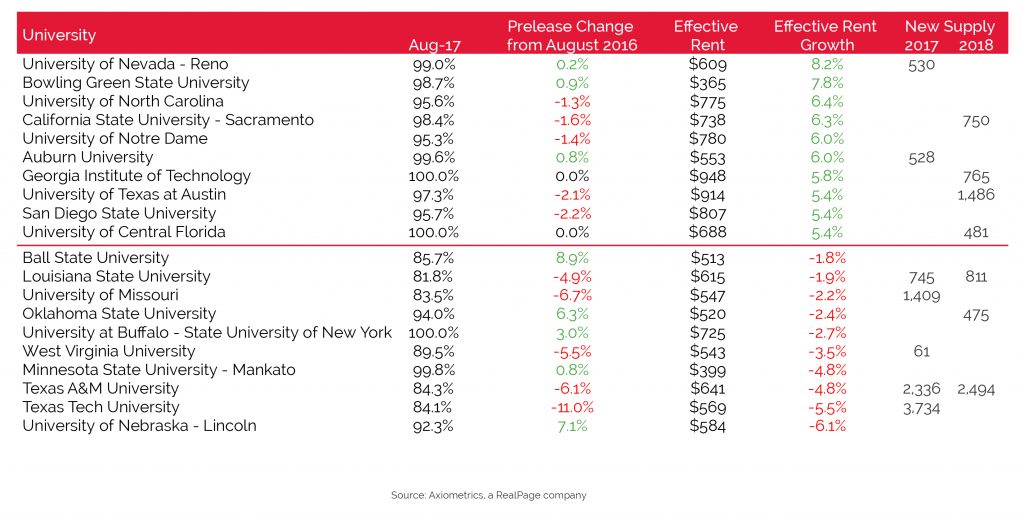 The University of Nevada–Reno and Bowling Green State University remained the top universities for rent growth throughout the 2017 student housing leasing season, averaging 8.2% and 7.8%, respectively. Both universities were also nearly 100% pre-leased in August, with a slight increase in pre-lease since last year.

Of the universities that ranked among the bottom performers, a few, in particular, have been mentioned throughout the year for their slowing performance and volume of supply. Texas Tech University, Texas A&M, the University of Missouri and Louisiana State University are the four universities consistently talked about this leasing season. The volume of supply delivered this year and, for most, several years prior, has forced properties to drop rents and leasing velocity to slow.

Although performance shifted at some universities, the off-campus housing industry is still illustrating solid results and sustained growth. Some markets that struggled with performance this fall are expected to rebound over the next year, though a few will continue to underperform until development activity slows.