The Indianapolis apartment market has maintained its slow-and-steady performance trajectory, as job growth-fueled demand has prevented the metro from suffering from supply-induced slippage.

Effective rent growth of 3.1% in 4th quarter 2017 was among the largest increases in the metro over the past five years. Only in 3rd quarter 2016 did the market register a higher rent growth rate (3.5%). 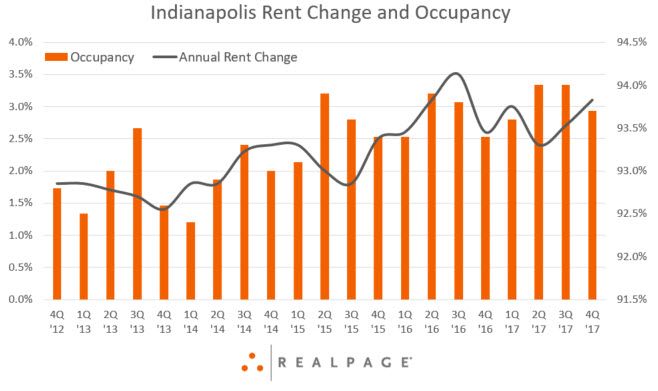 One reason for Indy’s consistent performance is the fact that overall demand has largely kept pace with or exceeded new supply. A total of 2,305 units completed in 2017, continuing a four-year streak of annual completion levels around 2,000 units to 4,5000 units. Some 2,894 units were absorbed in 2017, just 55 more than the number completed. Though the differences were not as narrow in previous years, relative equilibrium has been maintained. 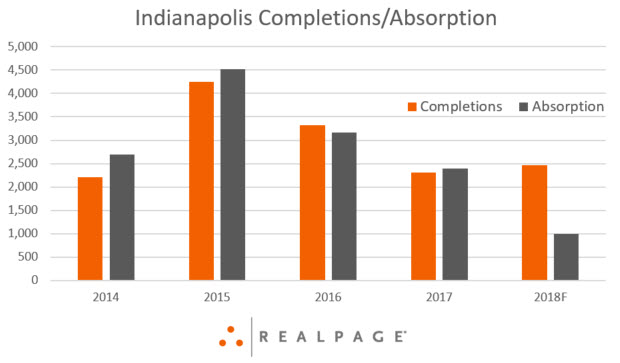 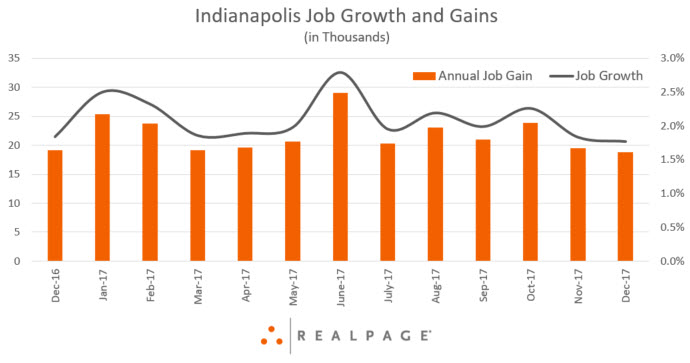 The biggest job growth has come in the Financial Activities sector, which added 4,400 new jobs last year, a 6.6% sector increase. The Trade/Transportation/Utilities, Professional/Business Services, Education/Health Services and Government sectors offer the most jobs in the area.

Those numbers could get a significant boost if Amazon decides to locate its HQ2 campus in Indianapolis, one of the 20 finalists on the company’s list. However, a recent RealPage report found that Indianapolis’ apartment market would struggle to absorb a sudden influx of 50,000 new jobs, were Amazon to come to the metro. That would result in significant pricing increases. 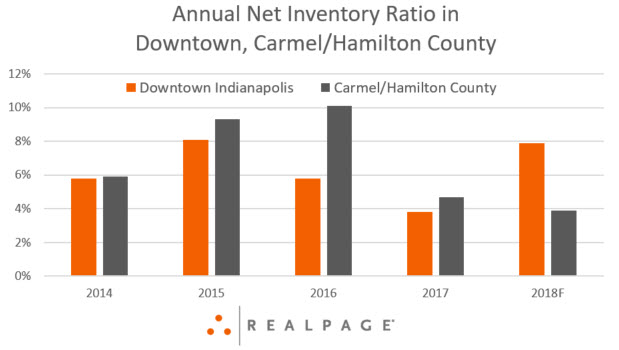 That decrease has boosted rent change figures in the submarket. The 2.2% annual growth in 2017 was surpassed over the past four years only by the 2.4% in 1st quarter 2017. Meanwhile, Downtown Indianapolis supply moderated in 2017 to 429 units, but a rise to 912 completions is on the horizon for 2018. 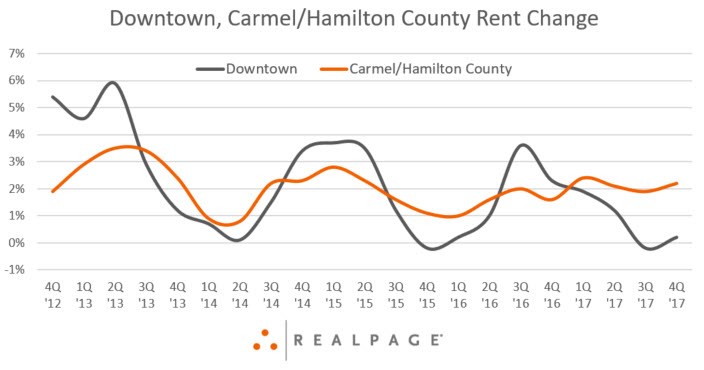 Rent change in the downtown submarket has been quite volatile in recent years as supply ebbed and flowed. It was toward the low end of the scale in late 2017, with 0.2% annual growth in 4th quarter, up from -0.2% in 3rd quarter. Downtown also sported the highest average rent in the metro – $1,276 at the end of 2017 – but a low occupancy rate of 91.8%.

San Antonio is a National Leader for Inventory Growth