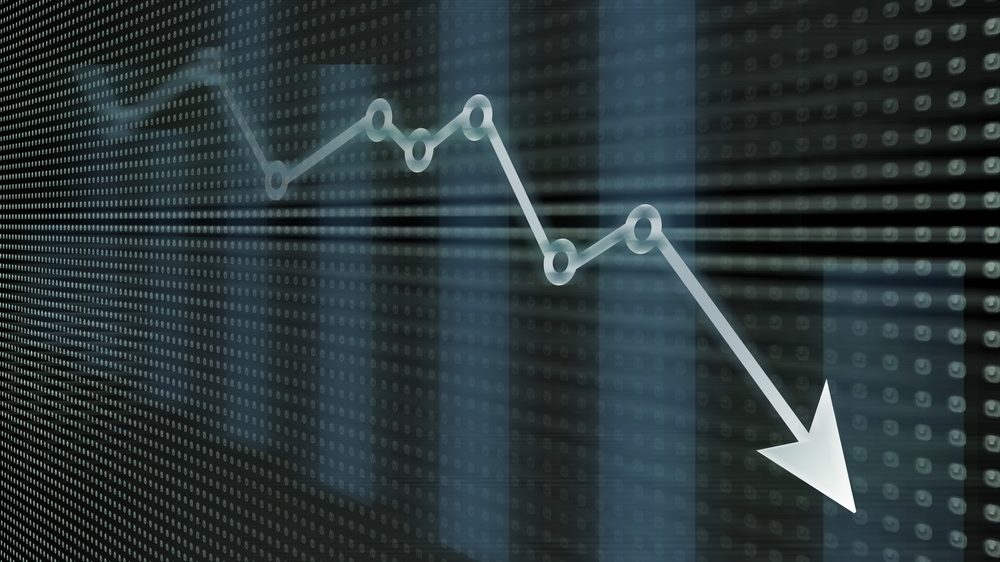 The first round of employment data since hurricanes pummeled the Texas and Florida coasts shows the storms significantly impacted hiring in metro areas in those states. Several of the affected metros fell from the latest job gains leaderboard in the aftermath of hurricanes Irma and Harvey.

What The Data Does (and Doesn’t) Mean for Affected Areas

A major decline in Leisure/Hospitality Services employment was evident across several metros impacted by hurricane-related weather in September 2017. However, a new national-level report from the Bureau of Labor Statistics indicates a sharp rise in the same employment sector in October 2017. The report notes that “many workers were off payrolls” in September, due to restaurant and bar closures during and after the weather events, suggesting losses in the Leisure/Hospitality Services sector are likely temporary.

Hurricane Irma affected, on some level, nearly every metro area in Florida, with metros on the state’s west coast recording the greatest slowdowns in workforce growth momentum.

The hurricane made Florida landfall on Sept. 10. According to preliminary numbers from the BLS, the state added 79,300 jobs in the year-ending September 2017, roughly a third of August 2017’s annual volume. Each sector except Leisure/Hospitality Services saw at least some growth. For the 12-month period, the Leisure/Hospitality Services industry lost nearly 19,000 jobs. Subsector Food Services/Drinking Places accounted for 86.8% of those net losses.

Among markets, Cape Coral-Fort Myers saw the largest blow to hiring, losing 6,800 net jobs, or 2.7% of its workforce, in the year-ending September 2017. That figure is 3.3 percentage points below the 0.6% growth registered during the 12 months ending in August 2017. Mining/Logging/Construction and Leisure/Hospitality Services respectively accounted for 41.2% and 39.7% of all net losses. Both sectors had experienced slow or negative annual growth in prior months, though on a much lesser scale.

The Cape Coral-Fort Myers area spans much of Lee County. An informal survey produced by the Lee County Economic Development Office found 84% of businesses experienced some type of storm-related economic or physical damage. At the same time, nearly all respondents reported being operational. 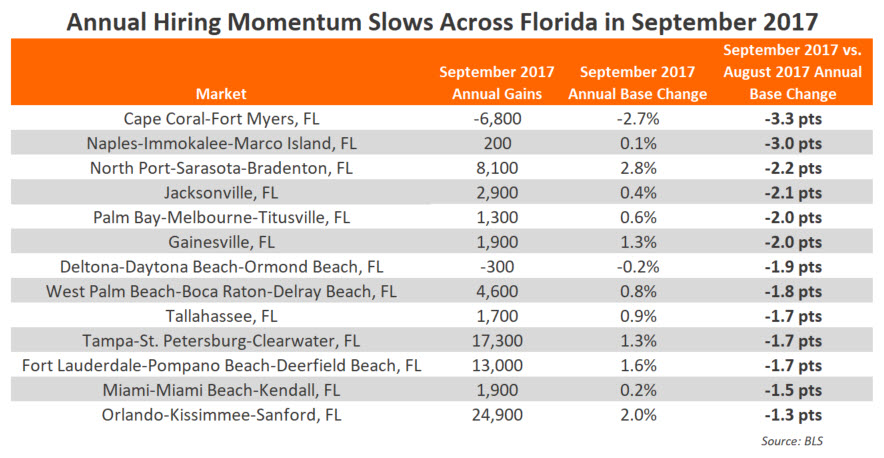 Neighboring Naples-Immokalee-Marco Island experienced the state’s second greatest deceleration in momentum. The metro grew by just 0.1%, or 200 positions, in the year-ending September 2017 – a 3.0-point difference from the 3.1%, 4,300-position expansion logged during the annual period ending in August 2017. While hiring in each employment sector slowed or saw no change, a negative shift was apparent in the Leisure/Hospitality Services sector. In the year-ending September 2017, the metro cut 1,700 industry positions. While some of those jobs are likely to reappear in the coming months, a major rebound is unlikely. Naples-Immokalee-Marco’s Leisure/Hospitality industry has recorded negative annual change in 11 of the 12 most recent months for which data is available.

The economic disruption may prove more taxing for some areas of Houston. While Houston fared better than many Florida metros in terms of job gains for the year-ending September 2017, Hurricane Harvey’s historic flooding event hit as Houston’s energy-dependent economy was beginning to show momentum after the slump in the nation’s energy sector.

Of note, the Education/Health Services sector also experienced a slowdown. That sector gained 9,000 jobs in the 12 months ending September 2017, compared to the 12,400 jobs gained in the year-ending August 2017. The slowdown could be due to a late start to the school year. Harvey prompted the Houston Independent School District to push the start of the school year to Sept. 11, two weeks after the scheduled start date. Some of the district’s heavily damaged schools began even later.

Meanwhile, Corpus Christi was the only hurricane-affected metro in Texas or Florida to see job growth actually accelerate in September. The metro, where Harvey made landfall Aug. 25, saw annual gains reach 5,500 jobs in September 2017, up from 5,300 in August 2017. That continued an upward trend in job gains over the past year.