The U.S. single-family housing market suffered a severe blow when the housing bubble collapsed, resulting in the financial crisis that was the Great Recession.

However, single-family building permits and new-home sales figures have risen steadily after bottoming from 2009-2010. The months of supply (MOS) figure also has dropped sharply, averaging 5.3 months since July 2013.

Does that mean that the single-family market is back? It depends on how you measure it.

As seen in the following chart, annual seasonally adjusted, single-family building permits (by month) have rebounded, while new-home sales have followed suit. New-home sales figures — from the Survey of Construction from the U.S. Census Bureau and Department of Housing and Urban Development — consist of homes built for sale (or speculatively built) and excludes contractor-built (or custom -built), owner-built and built-for-rent homes. That is why there is a large gap between permits and sales in the chart. The months’ supply figure is the ratio of houses for sale to houses sold. It indicates how long the current for-sale inventory would last given the current sales rate. 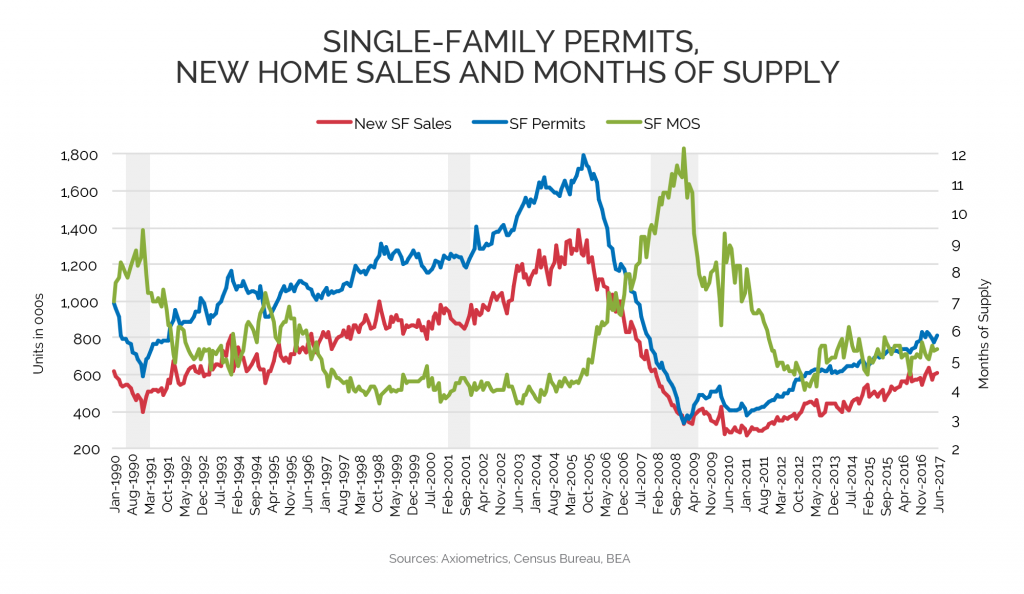 The current annual pace of permits and sales are comparable to the early 1990s. Even the current MOS is similar to the level of 1992-1993. However, we have not returned to the 1990s.

The rate of growth or growth trend is another measure of the health of the single-family housing market. The following chart shows the growth trends for different periods back to 1963. National recessions are shaded gray. 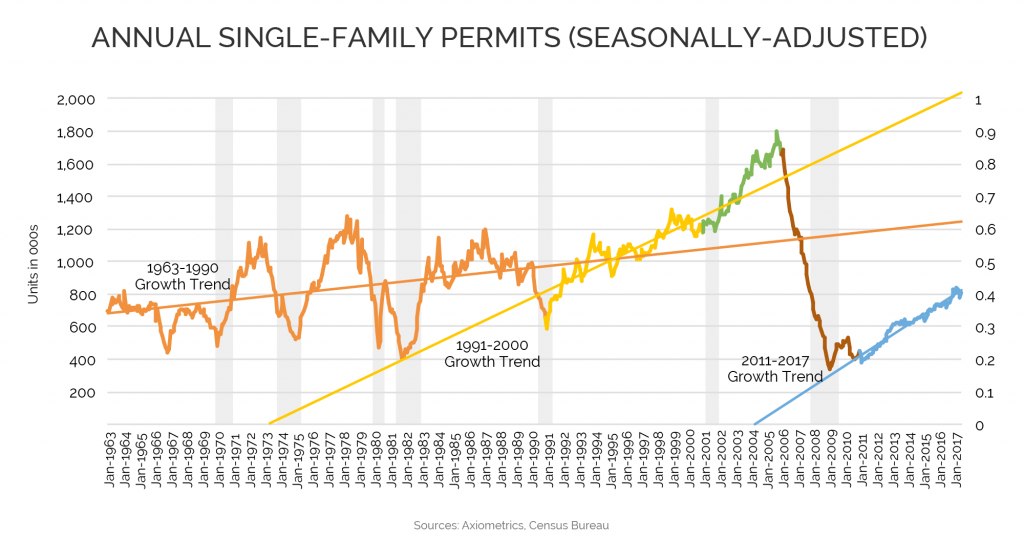 From 1963-1990, annual single-family permitting grew at an average of 3.7% per year. Several national recessions dampened the overall growth rate in that period. Single-family permitting picked up after the 1980s and grew by an annual average of 5.0% from 1991-2000. The growth of the housing bubble from 2001-2005 (7.1% annual growth) and bubble bust and Great Recession that followed (-20.4%) are not trended, but the growth trend from 2011-present shows an annual average growth rate of 9.8%.

If you measure the single-family market only in terms of annual growth, then the current recovery period appears best, but this is a bit misleading as the number of single-family units permitted is smaller than the 1991-2000 period. We measure growth from a smaller base. The current annual rate of about 800,000 homes permitted is two-thirds the annual rate of 1.2 million homes reached a few times in the 1970s, 1980s and late 1990s, and less than half the peak level of 1.8 million homes at the top of the housing bubble – a level that probably will not be matched in the foreseeable future.

Based on the growth rate of permits and new-home sales, the single-family housing market appears well on its way to a full recovery, although the number of units has yet to reflect that. There are still headwinds the industry must overcome, such as rising mortgage rates, labor and materials shortages, tighter (but improving) credit and lending standards, limited inventory of affordable homes, student debt burdens, et al.