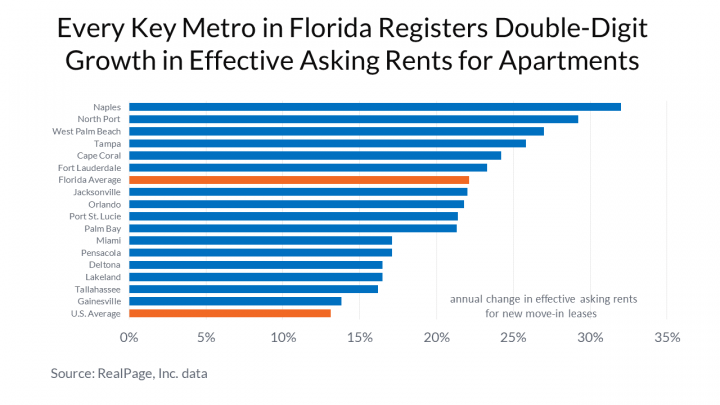 While impressive apartment market performances register all across the country right now, the numbers are proving especially robust in the state of Florida. Florida’s effective asking rents for new resident move-in leases are up 22.1% from year-ago prices as of October. Sixteen Florida markets rank among the nation’s 150 largest metros, and every one of them is experiencing annual rent growth that tops the U.S. norm of 13.1%. Leading the pack, Naples registers 32% annual rent growth, and pricing is up roughly 26% to 29% across North Port (including Sarasota and Bradenton), West Palm Beach and Tampa. Florida’s metros with outsized hospitality sectors – most notably Orlando and West Palm Beach – still have considerable work to do when it comes to replacing the jobs lost in Spring 2020. But markets across the state have drawn newcomer households who now have the ability to work from anywhere. No state income tax in Florida ranks as a big plus among households relocating from elsewhere on the East Coast. Aggressive construction is a downside risk factor to watch in some parts of Florida. Ongoing building translates to inventory growth of more than 5% in a half dozen spots – Lakeland, Jacksonville, Orlando, Palm Bay, Cape Coral and Port St. Lucie. Even if these additions push occupancy down a little, however, results still will be solid given the markets are so tight now.