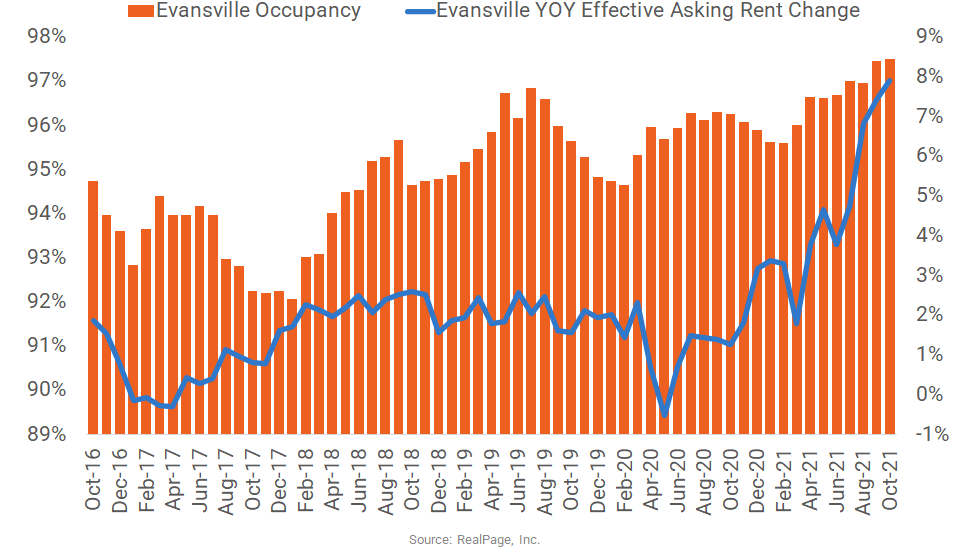 Sitting along the Ohio river, at the divide between Indiana and Kentucky, Evansville has seen a tightening apartment market of late, but this performance might not be sustainable. Over the last year, occupancy in Evansville accelerated 130 basis points, landing at 97.5% in October 2021. That is significant for the Crescent Valley city, as it’s only the fourth time that occupancy has broken the 97% threshold in the last ten years. For comparison, the five-year norm for occupancy is close to 95%. Meanwhile, operators pushed effective asking rents up 7.9% in the past year. While shy of the 12% to 13% rates seen in neighboring Indianapolis, Fort Wayne and South Bend, this was a solid performance for Evansville and was significantly above the market’s five-year average. Though Evansville has been strong lately, the question remains how long the market can sustain growth before demographic and economic headwinds hamper performance. According to 2020 population estimates from the U.S. Census Bureau, Evansville’s population remained relatively stagnant over the last five years. Additionally, the job market here has been relatively inactive in the past two decades.