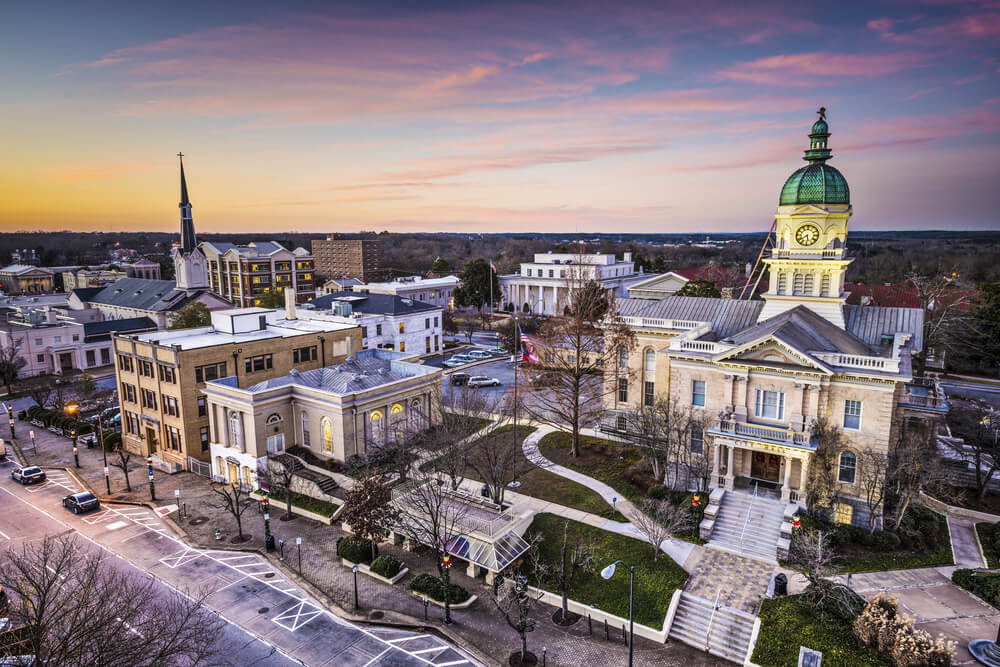 Data and analysis regarding the student housing market is often published in these spaces. But discussions surrounding conventional apartment performance are not the focus of analysis in these specific instances. Rather than discussing a city or a market’s performance, these analyses are generally university-specific.

But what about conventional apartment market performance in some quintessential college towns?

The semantics of what makes a college town a “true college town” can be debated ad nauseam. Whatever one’s definition of a college town may be, a handful of markets would make most people’s list. In this section, we selected five of the nation’s “archetypal” college towns, and examined conventional apartment market performance in these markets.

The analysis of these markets comprise the entire market, not just the properties within three miles from campus that are commonly called “student-competitive.”

Ann Arbor has quietly pieced together two straight solid years, averaging 4.5% rent growth during that period — 17th among the 120 largest U.S. apartment markets. During that same period, occupancy has been exceptionally tight. In fact, Ann Arbor’s 97.4% average occupancy over the past two years ranks second nationally, trailing only Madison, WI (another college town that arguably could have made the list).

A combination of factors led to Ann Arbor’s success: primarily, very strong job growth and the relative absence of new supply. Only 500 total units delivered to the market the past two years. Meanwhile, two-year cumulative job growth was 12.0%. For comparison, the national employment base expanded by 5.3%.

A national-championship caliber football team isn’t the only thing going well in Athens right now, as the apartment market also has enjoyed a stretch of outstanding performance. Athens’ average rent growth over the past two years (5.6%) ranked 12th nationally. In 2017, the market averaged an even stronger 6.9%, ranking sixth nationally.

Occupancy also has strengthened during the past two years, averaging 95.8% over the past two years and 96.1% in 2017. Occupancy rates this high are strong for any market, but compared to the long-term average occupancy in Athens (92.2% from 2000-2017), it is easier to see the market’s current strength.

Reasons for success in Athens parallel those in Ann Arbor – good job growth (the employment base expanded 8.8% in 2016 and 2017) and generally suppressed supply (the most recent construction in Athens completed in 2015).

The good news is performance has since returned to more favorable levels, reaching 5.4% in December, which ranked 16th nationally. Occupancy has climbed back to 95.6% after averaging 94.8% in 2016 and 2017.

Boulder’s slump from the second half of 2015 into early 2017 was largely due to the 640 units that delivered in 2016. While that absolute number may not have been problematic by itself, the fact that job growth failed to pick up steam while those units were delivered hampered the market’s performance considerably.

Located in the heart of South Carolina, Columbia – the state’s capital city – has failed to gain any meaningful traction in terms of rent growth in recent years. The market’s two-year average rent growth was 2.3% in 2016 and 2017 (slightly below the national average), and 2017 was even softer with an average of 1.6%. Occupancy struggled even more than rent growth:,The market’s 93.4% occupancy in 2017 ranked 109th nationally.

Nearly 1,300 units delivered to Columbia in 2016 and 2017. While 1,300 units may seem low for some markets over a two-year period, Columbia is small enough  that 1,300 units can affect market-wide performance – especially in the context of modest job growth.

Columbia’s major employment sectors serve as both a blessing and a curse. While the Government and Education and Health Services sector provide stable employment anchors, these sectors also fail to offer substantial growth that other sectors provide. The end result (much like we saw in 2016 and 2017) is modest apartment market performance.

Like Ann Arbor and Athens, Gainesville also has quietly strung together a few years of favorable performance., The North Florida market averaged 4.4% rent growth In 2016 and 2017, which ranked 24th, just ahead of Ann Arbor. Meanwhile, an average occupancy rate of 96.2% over that same period was 18th nationally.

Development in Gainesville has remained dormant for the better part of the past decade, with only one property totaling 296 units delivering from 2009-2017. The lack of development activity means Gainesville is not facing the supply challenges that most markets have gone through. Likewise, the market has been able to post good, albeit not substantial, job growth in recent years. The market’s employment base expanded 6.6% the past two years (compared to 5.3% nationwide).

More importantly, the types of jobs exhibiting growth in Gainesville has been conducive to positive apartment market performance. Professional and Businesses Services grew 11.5% and Financial Activities grew 9.5% over the past two years, besting national growth for those sectors by 340 and 540 basis points, respectively. Furthermore, over 36% of Gainesville’s population is between the ages of 18 and 34, creating an ample pool of prospective renters in the market. 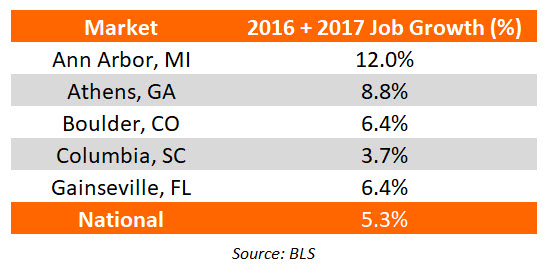