U.S. apartment rents backtracked during the final quarter of 2017. Effective rents for new leases across the nation’s 150 largest metros dropped 0.9% during the last three months of the year.

Normal seasonality in the apartment market performance plays a big role in shaping those results. With the combination of holidays and colder weather limiting the propensity to move right at the end of the year, the slowdown in renter prospects coming in the front door leads apartment owners and operators to set rents conservatively.

Rent loss around 0.5% is typical late in the year, and it’s not especially unusual to see that decline go to about 1%. In general, then, 4th quarter 2017’s loss registered at the steep end of the normal range, a performance that’s not at all surprising, especially taking into consideration the big block of just-completed apartments moving through the initial leasing process. 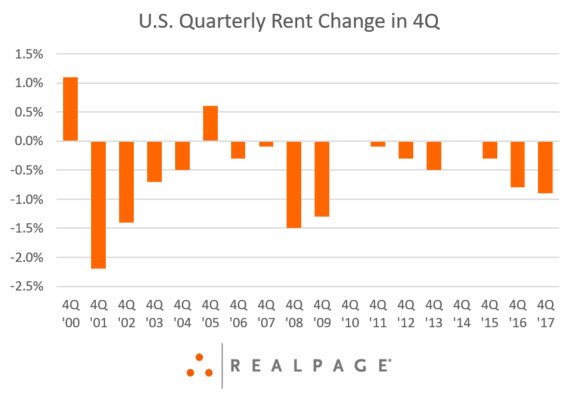 Most of the markets experiencing the biggest rent drops at the end of the year logged declines that weren’t especially out of line with local standards for 4th quarter results. Boston, Chicago and Washington, DC, for example, are places that lose lots of pricing power on a seasonal basis, and the quarterly rent cuts in each of those metros came in around the 2% mark – 2.3% in Boston, 2.1% in Chicago and 1.8% in Washington, DC. Looking at some warmer-weather markets, Raleigh’s 1.7% price drop was not especially out of the ordinary for than metro, nor was San Diego’s decline of 1.6%.

Rent cuts also proved meaningful during 4th quarter 2017 across the Bay Area, Denver, Portland, Charlotte, Pittsburgh and Sacramento. In each case, losses were a little steeper than is seasonally typical, but the declines were not so extreme that the big-picture stories for these markets look especially different than they did a few months ago.