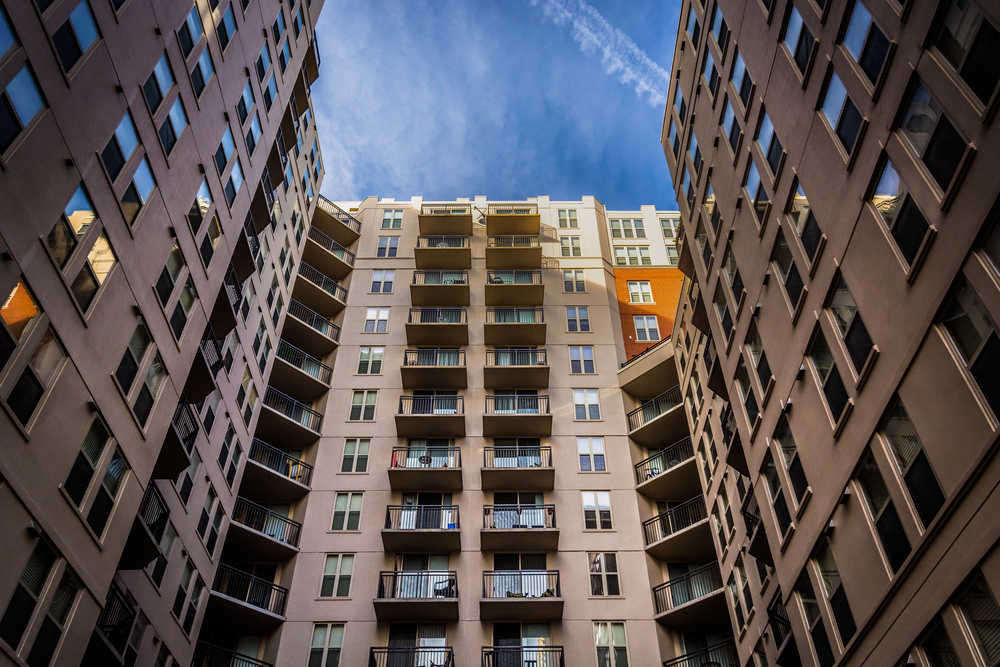 After a decade when apartment resident retention gradually got better and better, it’s now harder for property owners and operators to hold onto renters in some metros and some apartment product segments.

Influencing that shift, the world has simply changed over the past year. Many households have experienced income disruptions, and sometimes challenges in employment have led to shifts in household composition. Even if there are no significant changes in household finances, more people working from home can shift choices in apartment location as well as space needs and preferences.

Looking back to the pre-pandemic time frame of 2019 and the first couple months of 2020, about 53% of renters opted to stay in place when their initial apartment leases expired. That retention rate stood at an all-time high, having built gradually from a level that was hovering near 49% a decade earlier.

Once the first wave of COVID-19 hit, many households quickly hunkered down. Resident retention at lease expiration quickly soared to unprecedented levels, peaking at 58.5% in April 2020. While some committed to another year at their current apartments, quite a few others just pushed their decisions a little further into the future and opted for short-term leases covering three to six months. 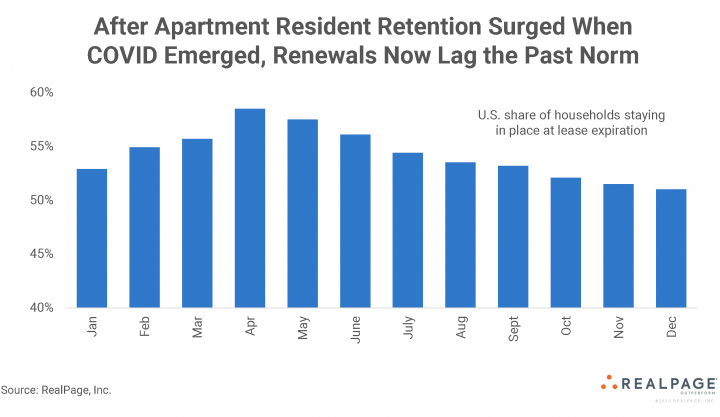 By the time we got to the last few months of 2020, then, the number of expiring leases had climbed to an unusually big volume for a time period when most property managers try to limit their lease expiration exposure. More households felt comfortable moving around at that point, even if COVID cases were still on the rise. The resident retention rate dropped, falling to a low of 51% in December for the U.S. as a whole.

Big Challenges for Some Properties

Shifts in resident retention rates at lease expiration in late 2020 to early 2021 simply reflect a return to the pre-pandemic norm for most properties in most metros. That’s an important point that bears repeating: Most communities are not struggling with mass move-outs.

However, when you slice and dice the data, some resident retention trouble spots are apparent.

In the most glaring shift in momentum, resident retention has cratered in some of the country’s gateway metros. This pattern reflects resident loss to more affordable parts of the country in some cases. Perhaps more significantly, however, remaining renters are moving around more frequently than ever before within these markets, taking advantage of now sharply discounted rents. Moving means saving money or upgrading to product that’s bigger or nicer than previous accommodations.

The most extreme examples of faltering resident retention are in New York, San Francisco and San Jose. The December 2020 resident retention rates fell 14 to 15 percentage points below the year-earlier level in each case. For San Francisco and San Jose, those shifts meant fewer than 40% of the households with expiring leases now are staying in place. 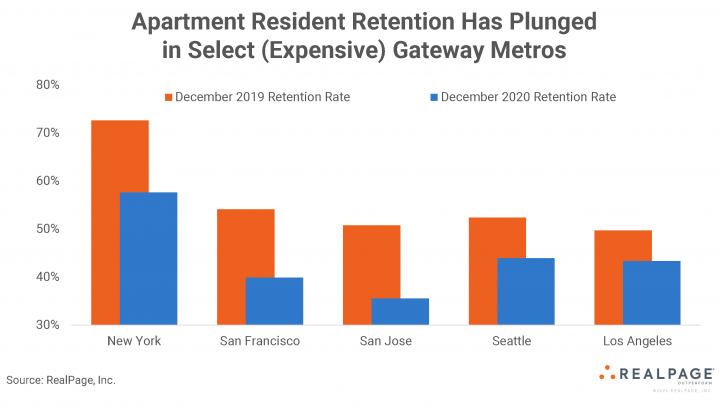 Seattle and Los Angeles are other gateway metros with retention challenges. Late 2020 retention was off late 2019 levels by roughly 6 to 9 percentage points in both locations.

Resident retention challenges are more pronounced in the urban core than in the suburbs across nearly all metros. Among neighborhoods that RealPage defines as urban core locations in the country’s 50 largest metros, resident retention in December 2020 was down to roughly 41%, off by 9 percentage point from the year-earlier figure.

In contrast, suburban resident retention of roughly 52% in late 2020 was unchanged from late 2019’s result. It’s perhaps worth noting there that suburban households were less mobile than their urban core counterparts even before the arrival of COVID and economic stress. Some mistakenly perceive the opposite to be true, worrying about loss of suburban renters to home purchase. 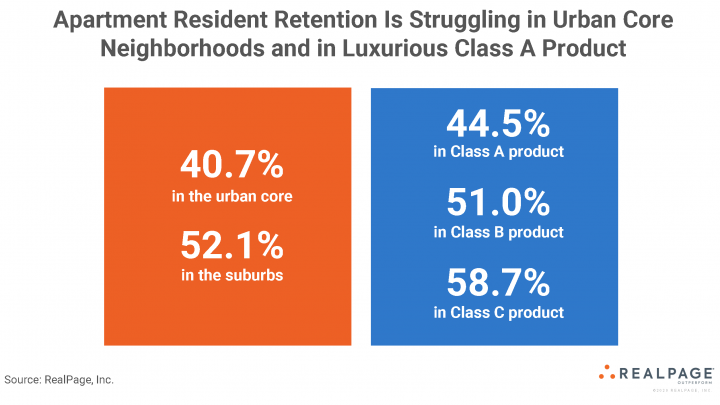 Finally, the pain is worse in luxury communities than in middle-market and lower-end properties. The resident retention rate dropped to 44.5% as of December 2020 in the country’s Class A stock, down from 47.2% a year earlier. Late 2020 retention rates of roughly 51% for Class B communities and 59% for the Class C stock were virtually identical to year-earlier levels.

A lease is a lease, whether that’s demand from a new household or just holding onto one already in place.

In some cases, then, property owners and operators may need to consider some renewal lease discounts in order to prevent moves by existing renters. However, it’s important to approach price changes with a scalpel, rather than a chain saw. Consider variations in move-out exposure by floor plan and other distinguishing features, so that rent giveaways don’t extend across the board and get out of hand.

Also, it’s essential to consider that price isn’t the only factor that influences resident retention. Owners and operators should pay attention to service, especially property maintenance, as well as communication efforts with the renter base and opportunities for residents to interact with each other.