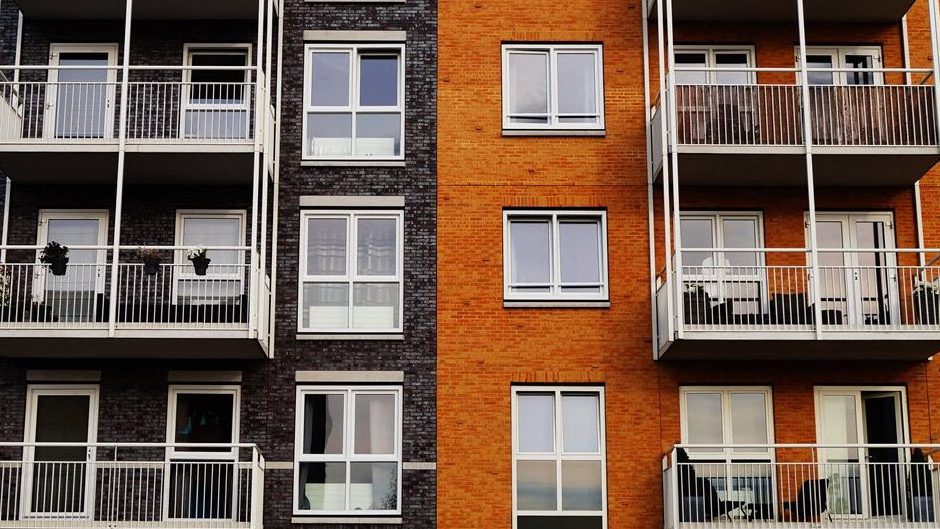 by   Greg Willett
in   Rent Payments

While rent payments in professionally managed apartments have been coming in at very healthy levels across most U.S. metros during 2021, collection rates are more challenging in a half-dozen locations.

New Orleans is the spot with the biggest struggle. Looking at results for projects where RealPage, Inc. property management software is used, the share of households making rent payments in 2021 through September averages just 85.2%. Since the New Orleans employment base is so hospitality heavy, the local job count remains about 11% below its pre-pandemic high. Already weak payment levels dropped even further in September, when Hurricane Ida dislocated many people and caused significant property damage. 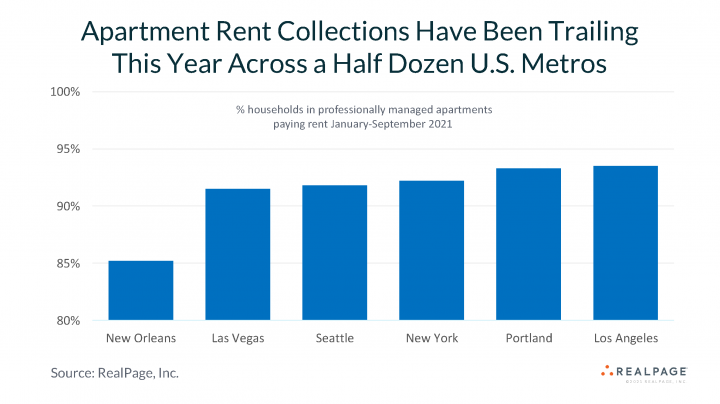 Lost hospitality jobs also are a problem to some degree in Las Vegas, where payment rates so far in 2021 register at 91.5%. However, the employment stats and the rent payment levels in Las Vegas are getting better with each passing month. Furthermore, with in-migration fueling big demand for apartments, occupancy and rents are way up in this metro, so many property owners here probably are positioned to handle some missed rent payments without too much distress.

In an interesting sidenote, reliance on hospitality jobs doesn’t necessarily translate to missed rent payments. Orlando’s share of total employment within the hospitality sector is second only to the share in Las Vegas, and Orlando ranks as a top 10 market for the share of owed rent collected in 2021 (97% have paid).

Seattle’s share of households making rent payments this year is third lowest nationally at 91.8%. When you compare Seattle’s economic performance, its housing availability and affordability stats, and its demographics with those in other U.S. locations, it appears that the share of renter households who could pay but are choosing to not meet these financial obligations is comparatively meaningful. Renter advocacy groups are especially vocal here, and they get lots of support from some government officials – specifically in the city of Seattle, but less so in the suburbs.

New York’s rent payment rate for 2021 averages 92.2%. When COVID-19 first emerged, New York took the hardest early hit, and local job losses were huge. Also, with a smaller share of this metro’s apartment product owned by big, national companies, many residents didn’t get the assistance provided elsewhere. In many other parts of the country, apartment owners played a big role connecting their residents with resources available locally, guiding them through securing unemployment benefits, and in some cases actually making direct financial assistance available. New York’s rent collections levels were registering big progress in 2021 until the after-effects of Hurricane Ida sent payments plunging in September.

Portland is in the #5 spot for missed rent payments in 2021. The share of households making payments in the January through September period averages 93.3%. As with Seattle, this poor result for Portland seems to be exaggerated by some renters who are not paying even though they could afford to do so.

For Los Angeles, the share of households paying rent from January through September averages 93.5%. As in some of the other metros mentioned here, select segments of the Los Angeles economy remain compromised. Hospitality employment is way down, but improving, and that’s true for much of the entertainment production sector as well. Looking back to last year, apartment owners and operators in Los Angeles initially reported spotty problems with qualified rents choosing not to pay their bills, but most say that challenge is less frequent now.