Apartment Construction is Taking Longer Than Ever 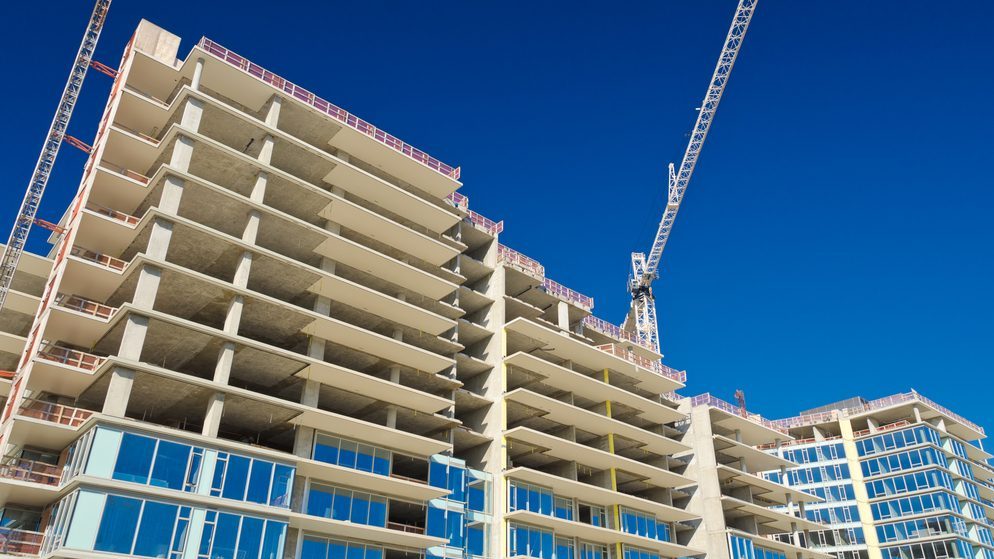 Living in Dallas, I am reminded daily of the immense scope of development underway, as cranes line the highways throughout the city. This is a trend that seems to be happening all over the country. There have been more than 750,000 new units added to the U.S. apartment stock in the last three years. That is the highest tally ever recorded since MPF Research began tracking pipeline data – and that number of new deliveries likely won’t peak until late 2017. With so much supply underway, we wanted to know whether the robust pipeline was further pushing out construction timelines. From looking at the underlying data from MPF Research, we found that the average length of construction has gotten longer. Furthermore, the data also shows that the composition of new apartment stock has evolved to produce less low-rise construction than ever.

Construction activity has increased every year since the end of 2011, when there were about 190,000 units under construction. Contrast that with the current construction level, around 560,000 units and nearly 1.7 times the decade average. But the interesting story lies in the lengthening construction trends and the shift toward denser development. The average time it takes to complete a new apartment project has been climbing since 2012. Intuitively, it makes sense that high-rises take longer to build than mid- or low-rises. High-rise developments regularly face intensified headwinds, including those from zoning restrictions, land acquisition, community opposition, contaminated sites, longer permitting processes, construction lead-times, complex financing and higher materials costs. Shorter buildings in less dense areas don’t face those hurdles, at least not to the same degree. These headwinds have caused high-rise construction times to lengthen. The average construction time of a high-rise apartment building once permits are approved is currently around 24 months, compared to 17.5 months in 2013. But that protraction has been seen in all types of apartments. In fact, the average apartment construction timelines are the longest they have ever been since MPF Research started collecting pipeline data. 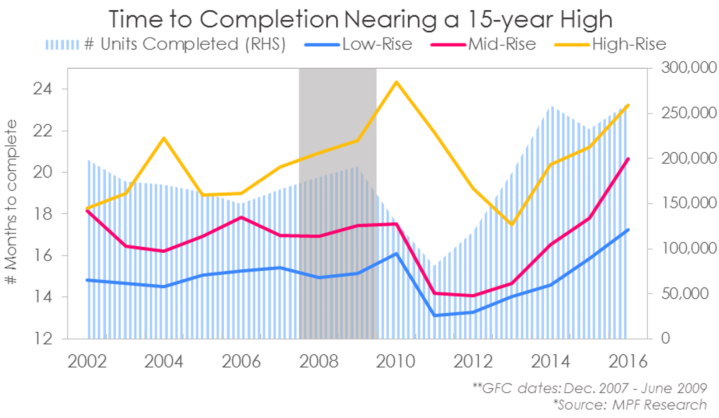 Part of the reason for this elongation is a skilled labor shortage. A national survey from the Associated General Contractors of America (AGC) reports that nearly 70% of construction firms are having difficulty finding hourly skilled craft workers. Among the listed, most common skilled crafts were carpenters, electricians, roofers and concrete workers. In fact, employment in the residential specialty trade contractor sector is still about 23% shy of the near-2.4 million peak set in 2006.

Finding or retaining craft workers with adequate experience is another roadblock. In a recent survey by AGC, 75% of respondents rated their local pipeline of well-trained craft professionals as fair-to-poor. Respondents also reported an “extreme lack of talented people with 10+ years of experience.” And young people entering the profession are not staying very long. Labor churn is costing companies that have to constantly retrain their workers. In turn, skilled craft professionals are retiring faster than they are being replaced. A recent study from the Urban Land Institute (ULI) reported that the labor shortage will continue “cutting into returns” by pushing up labor costs. And much of the labor shortage comes as new apartment completions are set to peak in late 2017, a time when such skills are in greatest demand.  Some have even argued the labor shortage may have prevented the apartment market from overbuilding in 2016.

Another reason for the longer construction time is asset location and height. In recent years, multifamily development trends have shifted toward urbanized infill locations with higher density, taking advantage of the proximate workforce capacity and existing infrastructure. And typically population density and building height go hand-in-hand. But our data also shows that completion timelines can vary wildly depending on the municipality. For example, New York, Los Angeles, Washington DC, Orange County and San Jose stood out for having the longest construction times. These areas tend to have the strictest permitting processes and building codes. Furthermore, multifamily development in more expensive, denser metros tends to have longer permit delays and extended construction timelines. And longer timelines mean higher liquidity risk for the builder, and more credit/market risk for the lender. This ultimately means that new product becomes more expensive for renters, particularly in supply-constrained metros that are already pricey. When new supply peaks this year, a majority of that apartment stock will be delivered to high-rent urban core areas and suburbs with the highest job growth.

Another interesting trend is the shift away from low-rises toward mid- and high-rise development. Since 2009, the proportion of new buildings with four or more stories has grown from 42% of the overall unit share to 69% in 2016. Meanwhile, new units in buildings three stories or less now comprise less than one-third of overall projects. Interestingly, nearly half of the new units delivered in 2016 have been in mid-rise buildings, which range from four to six stories. More of the walkable, urbanized apartments near job centers are being built today. The investment community, domestic and abroad, have flocked to secure capital in real assets, as a hedge against monetary instability. 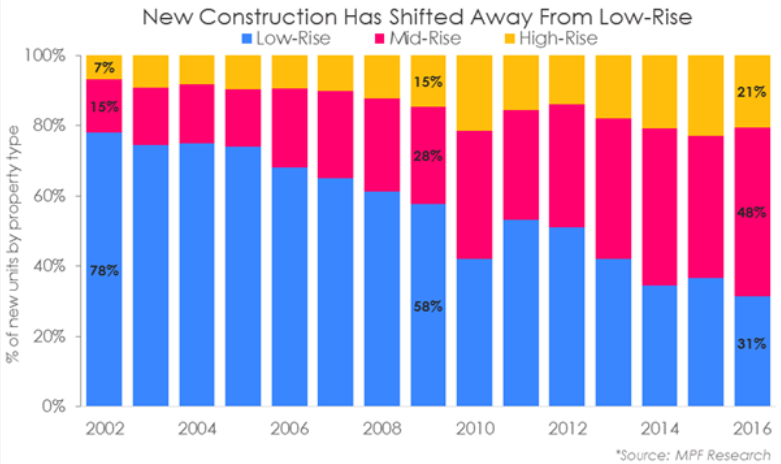 There has been a shift in the apartment construction process. Projects are taking longer to build, irrespective of height. That trend is taking shape nationally but is magnified in dense metros where supply is constrained. Survey results and research studies have suggested part of the problem is rooted in rising labor costs, primarily specialty-craft labor. And attrition of the aging skilled-craft labor force has burdened construction companies with finding and retaining young workers. With structural forces pushing out completion timelines, the lengthening, at least for this cycle, might be the new normal.