The delays in apartment construction just keep on coming, and we now have an estimate of how many new units scheduled for completion in 2017 will actually deliver in 2018.

This year’s estimate was derived by taking national identified supply statistics recorded in September of each year and comparing them to the apartment supply totals at the same time the following year. In this case, our analysts found that 15% of the units scheduled for 2016 were actually delivered in 2017. The same percentage was applied to this year’s delivery schedules, with the increase resulting from the higher volume of deliveries in 2017.

Of course, the actual percentage of apartment supply that will eventually be delayed won’t be known until January at the earliest, and it could be higher or lower than 15%. What is known is that the number of units of which delivery has been postponed until 2018 is growing week by week, month by month.

September is a good time to look at metrics like these, as all the units expected for 2017 delivery have likely been identified by now. Some properties that will be completed in 2018 might not have been identified yet.

So, which markets would be the most affected by the apartment construction delays? Using the same 15% base as the national estimate, it would seem that Dallas, New York and Houston would have the most units delayed into 2018, which makes sense, as those are the metros with the most identified supply for 2017. The table below shows the estimated delays for several major metros. 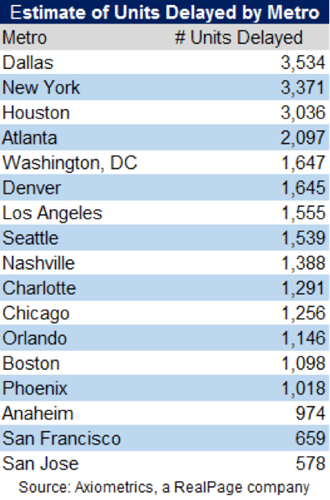 As with the national rate, the percentage and number of units affected could – and likely would – differ from the 15% base.

With construction labor shortages and the high cost of building materials, apartment construction delays will likely continue. For how long is the major question.

Some Markets See Big Shifts in Rent Growth in 2019

U.S. Rent Concessions Near 20-Year Lows, But Still Extensive in Some Markets