For the first time since the global pandemic began, annual multifamily permitting experienced a significant jump in July, suggesting that the initial interruption in permits in the previous three months has ended.

Total starts and permits are now approaching pre-pandemic levels and are about 40% to 60% greater than the low seen in April 2020. On an annual basis, however, total starts recovered quicker – up 23.4% compared to July 2019 – while total permits are up only 9.4% from last year.

Despite increasing concerns of flaring infection rates and renewed restrictions on businesses, developers continue to show optimism for an economic recovery with 220,000 more multifamily units started in July than the year before.

Very low mortgage rates, elevated personal savings and an increasing desire for suburban living are some of the factors boosting single-family housing demand in recent months. Single-family permits are leading the housing recovery with an increase of 83,000 units or 15.5% from last July, bringing the SAAR to 983,000 units. Single-family starts are 34,000 units or 7.4% ahead of last year’s pace and exceeded the 12-month average of 940,000 units.

The low point for residential completions came in May of this year with 838,000 single-family units built, but annual levels have once again topped 900,000 units in July. Multifamily completions are more volatile, but also slowed in April and May during the pandemic lockdowns. July’s annual completion rate for multifamily units registered at 364,000 units, up 9% year over year. 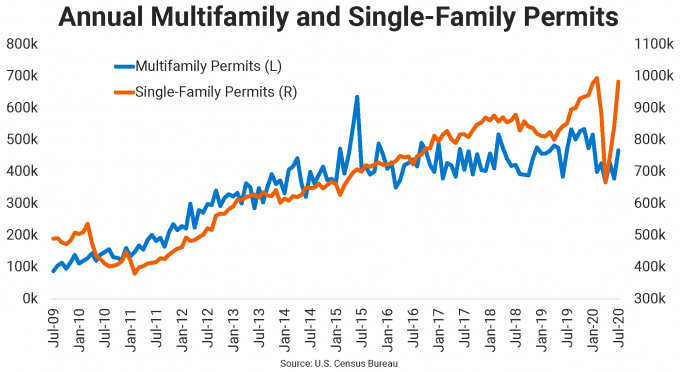 Los Angeles and Phoenix each moved up one slot, with a modest increase in annual permits for LA (+12.7%) and a significant jump in Phoenix (+77.6%). Permits in Seattle decreased 11.9% in July. Minneapolis-St. Paul and Washington, DC retained their spots at #8 and #9, despite a gain of 12.9% in Minneapolis and a decrease of -28.7% in DC. Meanwhile, Nashville cracked the top 10 with an almost 45% increase in permitting, replacing Orlando at #10. 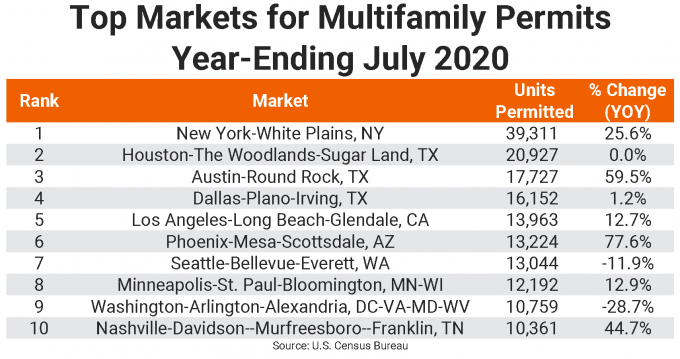 Only two of the top 10 markets experienced decreases in annual multifamily permitting from last year: Washington, DC (-4,328 units) and Seattle (-1,762).

Compared to last month, three of the top 10 had fewer annual multifamily permits than in June, with Houston, Seattle and Washington, DC each decreasing about 7%. The remaining seven markets increased annual permitting from last month ranging from 0.6% (Los Angeles) to 9.9% (Nashville), averaging 3.9%.

The list of top individual permitting places (cities, towns, boroughs, and unincorporated counties) generally include the principal city of some of the most active metro areas. The top 10 permitting place list includes all of the same 10 places as last month. The cities of Austin, Houston and Los Angeles continued to lead the list with more than 10,000 units each. Nashville shot past the borough of Brooklyn and Unincorporated Harris County to the #4 spot in July, and the remainder of the top permitting places returned in the same order as June.

With the Nashville-Davidson-Murfreesboro-Franklin market joining the top 10 permitting list, only Mecklenburg County (Charlotte) is the only permit-issuing place to make the top 10 list whose metro area did not make the top 10 metro list.