Rental affordability has come under fire in recent years – especially in the apartment market, as activists are quick to point out the sharp rent increases in U.S. apartments during the current cycle. It is, of course, true that apartment rents have risen quickly. Effective rents for new apartment leases have risen nearly 30% since 2010 as economic and demographic factors have created massive demand for rental housing since the Great Recession.

But market-rate apartments are just one section of the rental housing stock. And often, affordability concerns are based on income numbers in publicly available datasets. Applying this broad, imprecise income data to gauge the health of a high-performing market segment greatly skews the picture. Data exclusive to the market-rate apartment sector shows affordability issues are vastly overstated.

Examining millions of individual lease transactions utilizing RealPage software products tells a story that differs from the popular narrative. New residents of market-rate apartments are typically spending about 23% of their incomes on rent, according to RealPage lease-transaction data. This median rent-to-income ratio for households living in market-rate properties has held remarkably steady throughout this economic cycle. In 2017, median income among households signing new leases for market-rate properties reached $61,000. 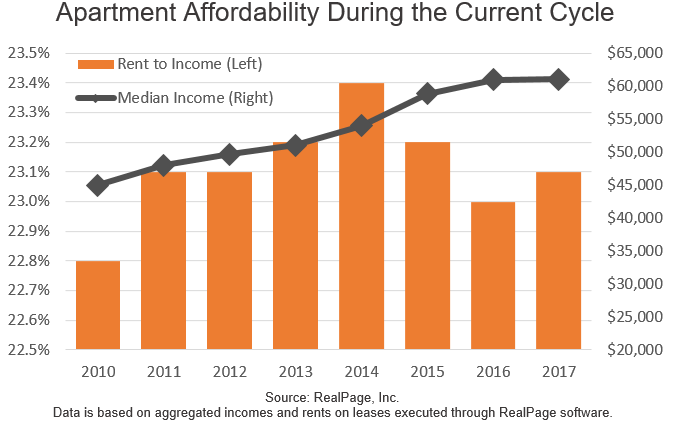 Affordability levels obviously vary by apartment product quality. Residents of Class A properties tend to move into units where rents equal 21% to 22% of their incomes. Median incomes among Class A apartment renters top $70,000. 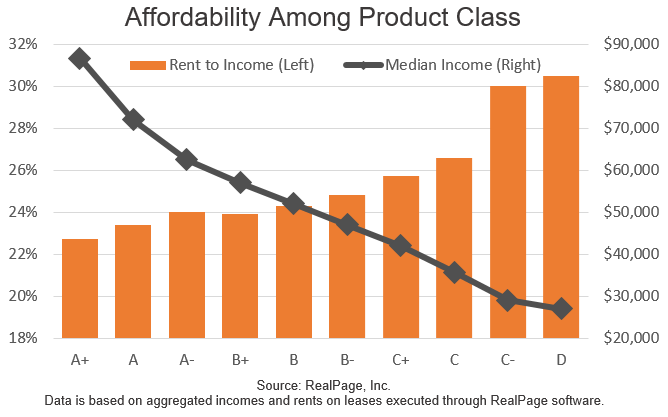 Residents of Class C and D projects have a much tougher time covering housing costs, with rents tending to command 25% to 31% of income. Those ratios are based on incomes generally in the $30,000 range. 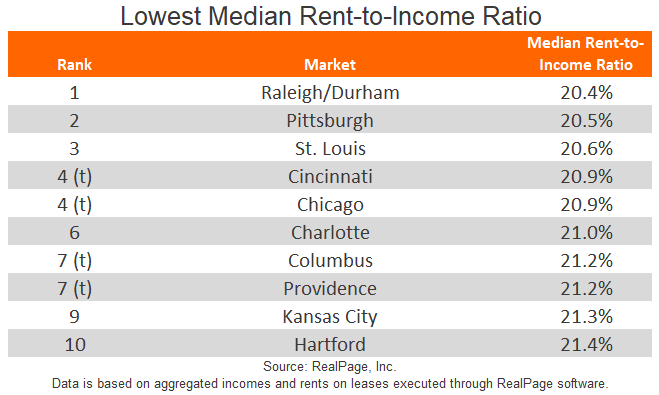 Other metros where market-rate apartments are most affordable for the local populace are heavy on Midwest and Rust Belt metros that generally have lower costs of living. Furthermore, because these spots are not big construction centers, they have inventories heavy on bread-and-butter, middle-tier product. Included on the list of low rent-to-income markets are Pittsburgh, St. Louis, Cincinnati, Chicago, Columbus and Kansas City.

Miami is the metro where market-rate apartment renters struggle the most to cover housing costs, as the median rent-to-income ratio reaches 28.8%. Affordability is a challenge across South Florida. Fort Lauderdale and West Palm Beach also are high rent-to-income markets. 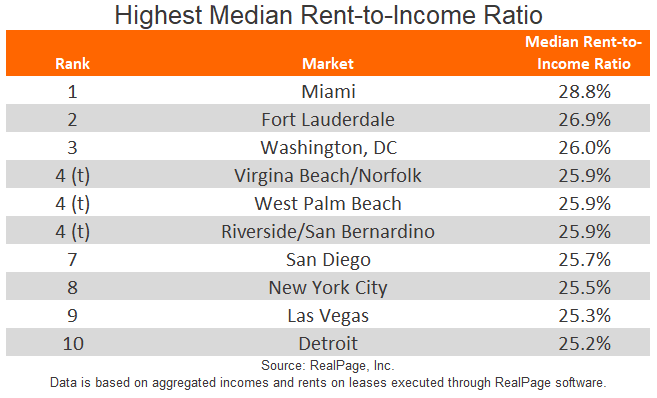 High-priced gateway cities like Washington, DC, San Diego and New York also are high rent-to-income metros. Additional spots where housing affordability can be a stretch include Riverside-San Bernardino, Las Vegas and Detroit, all locations where comparatively low incomes – rather than comparatively high rents – shape the statistics.

What Does the Data Tell Us?

Rents that have climbed faster than incomes during this economic cycle have led to housing affordability challenges for some. But the problem isn’t rent growth in market-rate apartments. It’s in the lack of income-restricted rental units for low-income households. Indeed, the Harvard Joint Center for Housing Studies found in its 2017 annual report that only 35 units of federally subsidized housing were available for every 100 households that earn 30% or less of area median incomes. One way to help reduce the shortage of designated affordable housing is to include a certain amount of income-restricted units in otherwise market-rate apartment developments. Some U.S. municipalities are exploring requirements that new market-rate developments would include a certain number of designated affordable units.

For the market-rate apartment market, rent-to-income considerations certainly do not cap pricing power across the board. The spread in rent-to-income ratios throughout apartment product niches and locations illustrates the need for pricing strategies to reflect individual portfolio or even individual property characteristics.