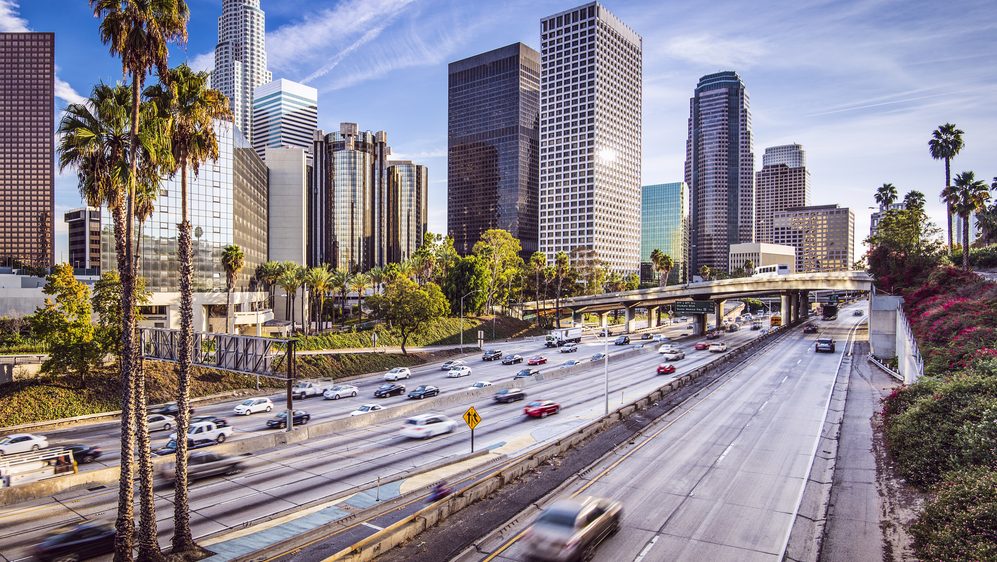 After exploring some of the riskiest markets in the country, we turn our attention to those markets demonstrating pronouncedly low levels of risk toward rent recessions. A recap on the methodology is available in the first blog in this series. In short, to estimate the level of risk, the probability of a rent recession, a period of two or more consecutive annual rent decreases, was calculated. The result indicates the relative level of risk a market is facing for such an event, compared to its historical performance.

The least risky markets in this list are hitting their stride and are showing consistently strong numbers across apartment market data and economic indicators. So let’s dive in to see which markets are seeing their greatest levels of overall stability since MPF Research began tracking them. 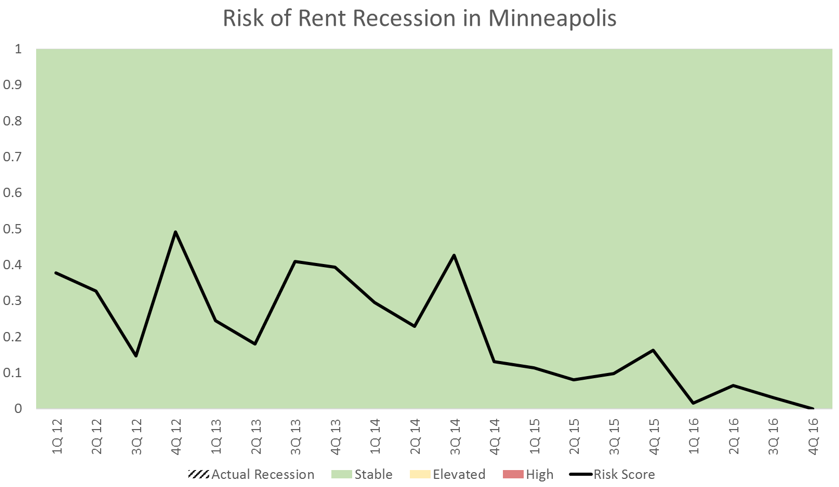 How do the 4th quarter 2016 numbers stack up compared to Minneapolis’ performances since 2001? 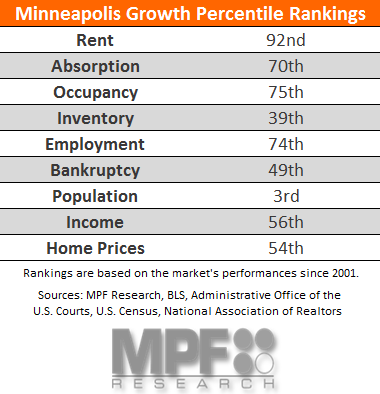 Minneapolis has been on the up-and-up lately, as demonstrated by the market’s strong performance through 2016. In 4th quarter 2016, rent growth landed in the top decile historically, seeing its strongest expansion since 2011. Absorption and occupancy growth landed in the 70th percentile or better and net inventory growth remains relatively subdued compared to what the market has seen in the past. Employment growth has proven strong for the market since the Great Financial Crisis. Income growth, which has generally followed employment strength, has taken a breather recently, although it still lands in the top half performance for that metric in Minneapolis. Personal bankruptcies are still decreasing in Minneapolis, albeit at a slower pace as the number approaches its cyclical bottom. The glaring weakness in Minneapolis is its weak population growth, a number that could prove important should net inventory growth begin to pick up. 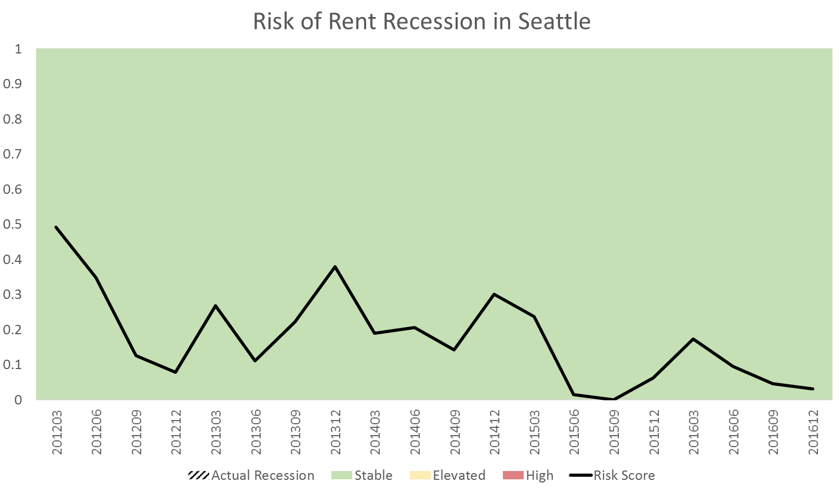 Like some markets on the elevated risk list, Seattle has seen unusually strong growth throughout the current economic cycle. But for Seattle, the trend has continued into 4th quarter 2016, which brought some of the strongest performances in the market’s history since 2001. 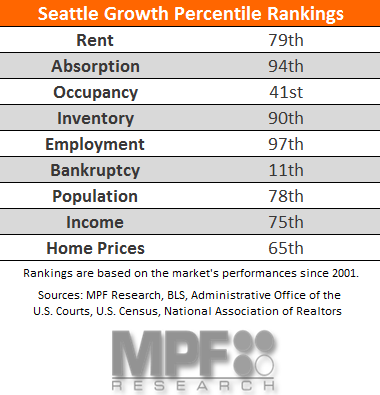 In Seattle, absorption is nearing all-time highs in the market, in step with net inventory growth. Rent is still growing at a very strong pace, near the top 20 percent of performances in the market. Occupancy is the weak point, as growth has slowed in this metric. Occupancy does not have much more room for improvement, however, as Seattle has sustained an occupancy rate of at least 96% since 1st quarter 2014. The economic backdrop is also strong in Seattle. Employment is growing near the fastest pace seen since MPF Research began tracking the area, while personal bankruptcies are declining similarly. It is hard to find much bad news in any of Seattle’s remaining economic data, which are performing at the top 35th percentile or better in more than 15 years of data. 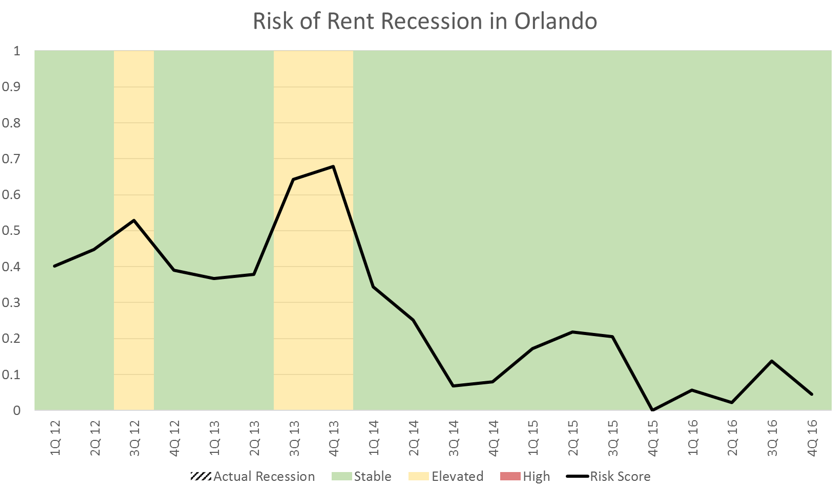 Orlando is an interesting entry on the low-risk markets list, as its neighbor a few hours south, South Florida, was among our top 10 riskiest markets. Orlando is more than theme parks, however, as its current performance remains strong. 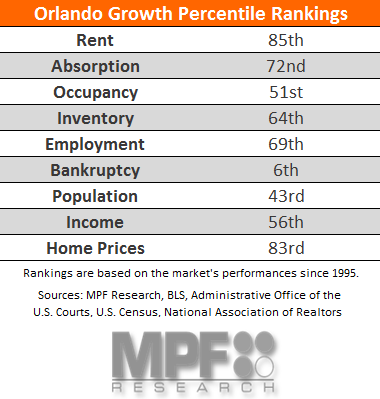 Orlando is seeing strong and steady labor market growth accompanied by consistent income growth. Home prices in the area are well into the top quartile of performances seen in the market dating all the way back to 1995. Apartment metrics such as rent growth and absorption are in similarly strong territory over the same period. Occupancy growth has slowed in recent quarters, as the market remains essentially full, sustaining a rate of 96% or higher for the past seven quarters. Net inventory growth in the market, while strong, has stepped off since the beginning of 2016. 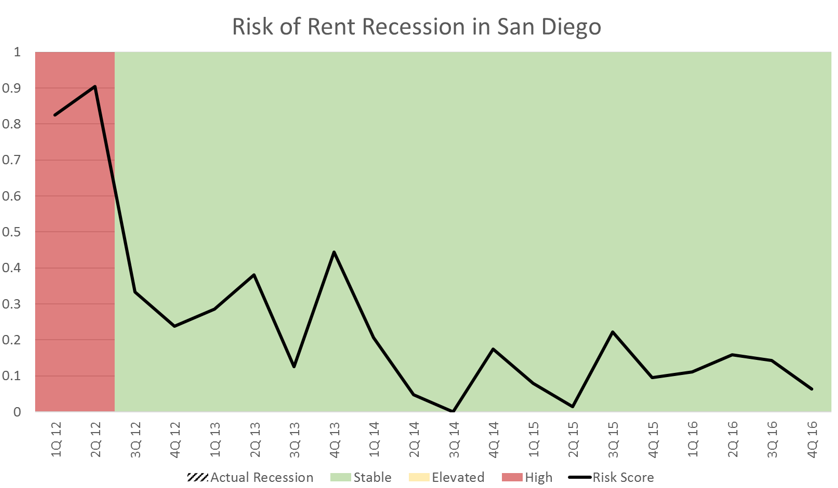 San Diego, with broader Southern California, has held a relatively low-risk profile since 2014. Let’s see how recent performance stacks up to the metro’s performance since 2001. 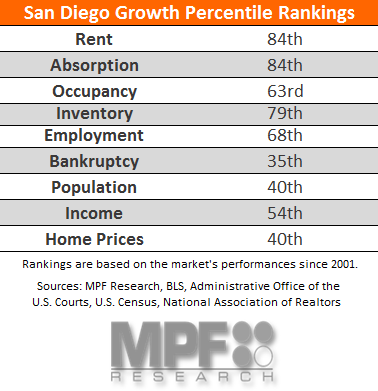 Rent and absorption performance in the market last quarter was in the top 20th percentile of historical performances dating back 15 years. Occupancy has not been growing at quite as strong of a pace however, which is understandable as net inventory growth is performing at the 79th percentile for the market. Employment growth rates for the metro had measured consistently near the 90th percentile of performances for the metro over the past six quarters, before stumbling to a still-strong performance for the market. Population growth for San Diego remains restrained. Personal bankruptcies continue to shrink, but personal income growth in the metro has eased of late. 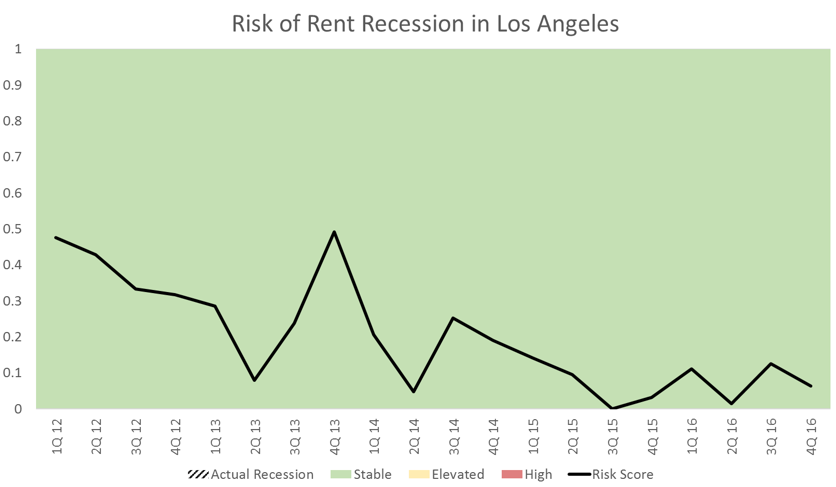 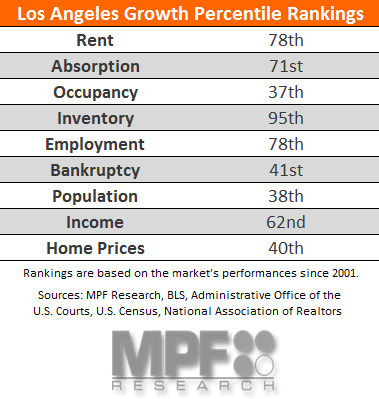 Los Angeles saw near record rent growth in the beginning of 2016, with annual absorptions falling into the same stratosphere. Both of those variables remain in the top 30th percentile of performances for the market since 2001. Occupancy has flattened out, which is understandable, as Los Angeles has sustained an occupancy rate exceeding 97% for the past seven quarters. Economic indicators for the area are also strong, with employment and income growth clocking in at historically strong rates.

What do Stable Markets Have in Common?

All of the markets profiled here are currently experiencing rent and absorption performances in the top 30th percentile for their market histories. Another commonality exists in personal bankruptcy filings in these metros, all of which are seeing contracting numbers on an annual basis. Seattle and Orlando are seeing pronouncedly strong decreases in bankruptcies, showing there’s still more room for the consumer’s financial health to improve in these areas. Employment growth is also performing strongly across the regions, with these low-risk markets currently experiencing growth rates near or better than the top 30th percentile of their historical performances.

It should be remembered that these risk scores are relative to their respective market histories, an important detail, as metros do not react uniformly to the same risks. The inverse there, however, is that it is difficult to compare these figures with each other, as the depth and duration of rent recessions varies greatly from metro to metro. The scores can, however, help to holistically view the composite impact of those variables that tend to cause metros to slip into rent recessionary periods exceeding more than two quarters.